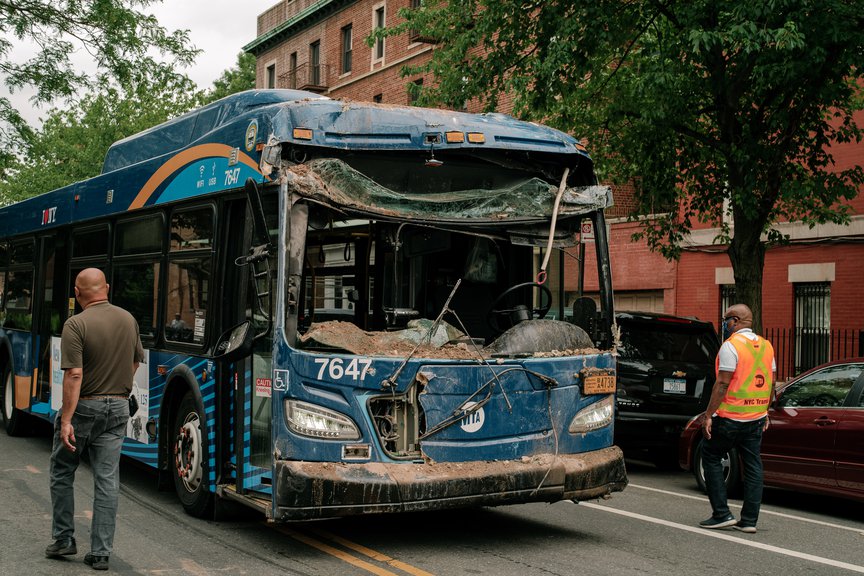 The MTA bus that slammed into a Brooklyn row house this week, then captured the hearts of New Yorkers as it remained lodged in the building for four straight days, has been successfully removed.

Close to 100 onlookers gathered on Friday to send off the stuck bus, which has become a strange neighborhood attraction in Prospect Lefferts Gardens this week. As New Yorkers waited in anticipation, some for more than hour, they traded stories about the bus, posed for photos with it, and wondered about the stability of the building. When it was finally detached and hauled away, they cheered as if taking in a parade.

“Looks like the whole community came out to see this,” said one onlooker. Others compared the predicament to a somewhat less catastrophic version of the container ship that obstructed the Suez Canal for days earlier this year.

The B49 bus slammed into the facade of the 174 Lincoln Avenue on Monday afternoon, after the driver appeared to lose control of the vehicle. Sixteen people were evaluated for minor injuries, though no one was seriously hurt.

It is unclear what caused the crash. While the bus operator has said that his foot got stuck between the two pedals, video of the incident shows him driving with shopping bags near his feet, standing from his seat, and failing to properly deactivate the bus — mistakes the MTA has called “disturbing.”

The Department of Buildings later found that the impact of the collision had severely damaged parts of the building, including a load-bearing masonry wall, putting the building in danger of collapsing.

After issuing a vacate order, the DOB and owner worked to shore up the building. Other contractors installed a construction fence around the bus — leaving curious bus-watchers to peek through plexiglass windows.

“It’s not something you see everyday,” said Joan Y, 62, who watched the scene alongside her daughter on Friday morning. “We were on our way to the city, but then all this was about to happen, and that was 45 minutes ago. We’ll stay until they pull it away.”