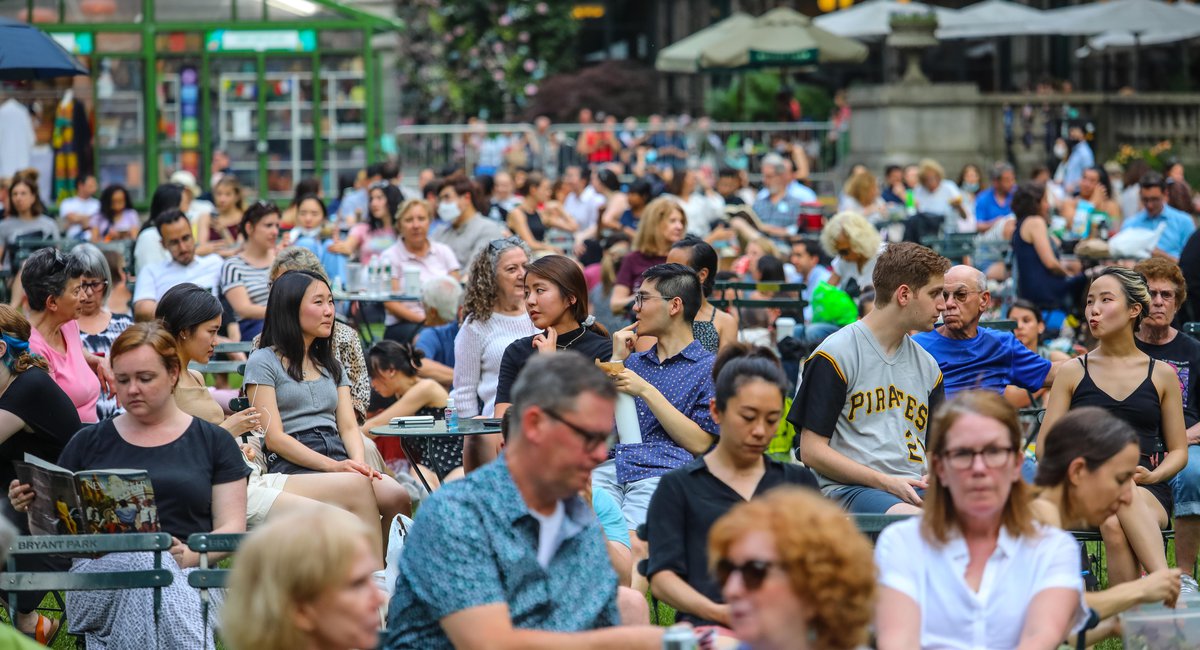 So many NYC summer traditions got canceled last year that it’s almost hard to remember what it was like when tens of thousands of people gathered in one of the city’s great parks for a free concert from the world-renowned orchestra. And though we’re not quite back there yet, Wednesday night marked a major pandemic-era milestone, the return of the free outdoor New York Philharmonic concerts, kicking off the summer-long series of Bryant Park Picnic Performances.

There was no mad dash for a prime picnic spot as in the good ol’ Movie Nights days, somewhat due to the timed-entry tickets which ensured that people trickled in from 5:30 until the show began at 7 p.m. Capacity was also limited to the point where there was plenty of room for everyone to spread out, and the lawn was divided into two sections: those who could prove they’ve been fully vaccinated, and a much smaller, much more sparsely attended roped-off area for those who could provide only a recent negative COVID test.

As for the performance itself, a joyous round of applause rose up when conductor Lina González-Granados took the stage for her New York Philharmonic debut, and the 35-piece orchestra launched into a crowd-pleasing program that included selections by Joseph Boulogne, Chevalier de Saint-Georges, Paul Creston, Stravinsky, Ruth Crawford Seeger, and Mozart, as well as the world premiere of Ilana Rahim-Braden’s new work, “I am Composition, but Stronger.”

There are three more free New York Philharmonic performances this week at Bryant Park: Thurday, June 10th through Saturday, June 12th, all starting at 7p.m. Tickets are sold out, but last night it was easy to snag a chair around the perimeter if you want to just show up and listen to some music. And the Picnic Performance series continues all summer, with shows from the likes of the New York City Opera, the Spanish Harlem Orchestra, Dizzy’s Club and the Young Stars of Jazz, the Paul Taylor Dance Company, and the New York Chinese Cultural Center.

Deep in the Atlantic Ocean, a fundamental engine of the globe’s climate is losing momentum. The Gulf…

Restaurants have always been a vital part of any New York City neighborhood. One of the greatest per…