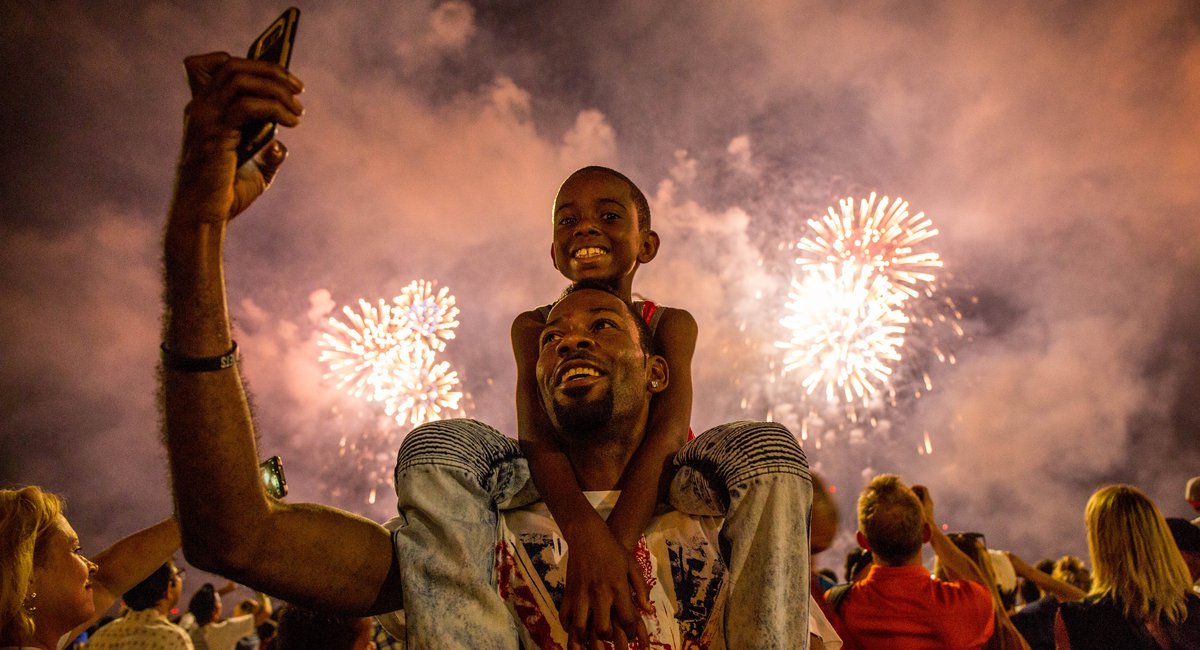 Because of the pandemic, the only thing spectacular about last year’s annual Macy’s 4th of July Fireworks® Spectacular was how spectacularly it was downsized. Instead of giant crowds flocking to see the fireworks display, New Yorkers were told to stay home and watch pre-recorded fireworks on TV—or if they were really lucky, they got to enjoy five minutes of unannounced fireworks at random times and days in each borough (in between countless hours of illegal fireworks).

But all of that is a thing of the past, because it’s 2021, the pandemic is in the rearview mirror [Editor’s Note: no it’s not, it’s really not], and fireworks are back, baby!

Mayor Bill de Blasio made the announcement during his morning press conference on Thursday.

The event will take place on Sunday July 4th, starting at approximately 9:25 p.m. Macy’s says it will launch “more than 65,000 shells and effects from five barges positioned on the East River centered in midtown The 25-minute display will feature dozens of colors and shapes, creating dramatic effects a mile across the river and from 1,000 feet in the air to the water’s edge.”

The musical theme to this year’s event is, as you may have expected, patriotic songs dedicated to “the spirit of optimism and bravery of the American people.” That will include a rendition of “Lift Every Voice and Sing” by Broadway Inspirational Voices and Tori Kelly singing Rodgers and Hammerstein’s classic “You’ll Never Walk Alone” from the musical Carousel.

BURSTING NEWS: The @Macys 4th of July fireworks show will be BACK this year!

PLUS — there will be fireworks at Coney Island right after Macy’s show! pic.twitter.com/F2jS1AprHX

BUT WAIT, THERE’S MORE: just like the good old pre-pandemic days, the event will also be broadcast on NBC from 8-10 p.m. for those who can’t or don’t want to show up in person. And that means there’ll be some big-name openers for the fireworks display, including Coldplay, Black Pumas, OneRepublic, Reba McEntire and more. (It’s unclear whether New Yorkers will be able to see those performances live, but more details to come.)

De Blasio said this year’s display would have added meaning as a “tremendous sign of the rebirth of NYC.”

He also noted that immediately after the end of the Macy’s fireworks, there will be fireworks in Coney Island. That is expected to run from around 10 p.m.-10:15 p.m. on July 4th, and can be see from the Boardwalk.

If you’re more into spontaneous illegal rather than pre-planned legal fireworks, it’s been a far less intense period for them than last summer, but they’re definitely still out there.

Celebrating Judy Garland on Her Birthday

At events around the city, demonstrators are commemorating the one-year anniversary of the murder of…

The U.K. tour of Everybody’s Talking About Jamie will embark again in September, beginning wit…