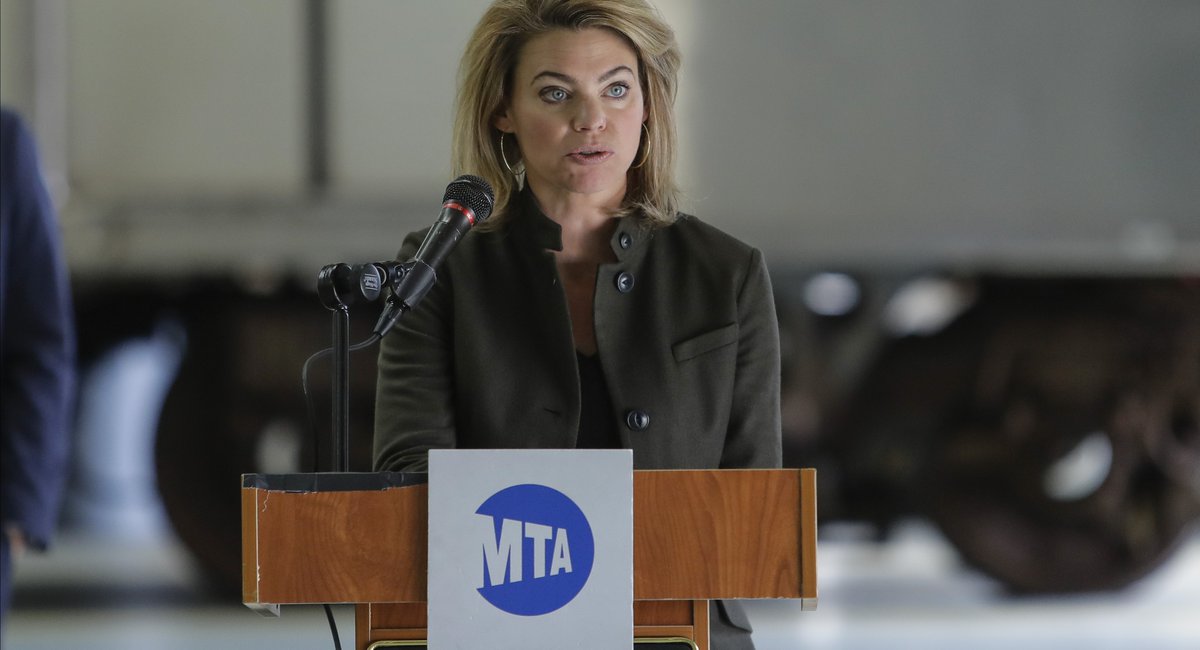 Sarah Feinberg, who has served as interim president of New York City Transit (NYCT) since Andy Byford left in early 2020, has been tapped by Governor Andrew Cuomo to be the next chair of the MTA, according to a senior MTA official.

The current MTA Chairman and Chief Executive Patrick Foye is expected to be appointed as interim president and CEO at Empire State Development, the state’s economic development arm.

It appears that Cuomo wants to split those positions—chairman and chief executive officer—into two roles.

While Feinberg will serve as chair of the MTA, Janno Lieber, the MTA’s current chief development officer, will be nominated to serve as the MTA’s chief executive, which entails running day-to-day operations and overseeing capital spending.

Both Feinberg’s and Lieber’s nominations must be approved by the state Senate.

The reshuffling of the MTA leadership was first reported by the Wall Street Journal.

“I am thrilled to be stepping into a position that allows me to continue to play a significant role in how our subway and bus systems operate, but to also have even more of an impact in shaping the future of the agency, and of transportation in this city and region,” Feinberg said in a statement. “There should be no higher priority than ensuring we are doing all we can to bring ridership back – and as ridership comes back, so will the city’s economic recovery.”

“The COVID crisis proved – once again – that mass transit is New York’s linchpin, in good times and bad,” Lieber added. “Now we need to keep building a system that connects people from all communities to jobs, education and opportunity. I look forward to taking on this important new role and to lead MTA in support of the New York City region’s economic revival.”

Feinberg previously served as head of the Federal Railway Administration during the Obama administration, and was appointed to the MTA board by Cuomo in 2017 before being picked by him to takeover for Byford. While on the board, she was an advocate for more cops in the subways, and built a reputation for her focus on quality-of-life concerns in the system such as fare evasion and homelessness.

As interim president, she has run NYC Transit during the the tumultuous period of the pandemic, during which ridership dropped to historic lows: pre-pandemic daily ridership, which regularly exceeded 5 million rides per day, fell more than 90 percent at the height of the pandemic last April to a low of roughly 300,000 daily trips. Daily bus trips at that time were also down around 75 percent from pre-pandemic figures.

Cuomo temporarily halted 24-hour subway service for much of the last year, mainly for disinfection of train cars; it only resumed again in mid-May. As of last weekend, subway ridership is still down by around 40-50% of pre-pandemic numbers.

There has also been an uptick in certain categories of subway crimes, and an outcry over the perception thereof, leading to calls for more police underground. Critics, including the NYPD, claim that the MTA has been overplaying the public’s fear factor.

Outgoing chairman/chief Foye said in a statement, “I am proud of the way the MTA prepared for and responded to the pandemic, and the way our heroic employees – heroes moving heroes – carried first responders and essential workers to the frontlines to do their jobs. I am also proud and grateful for the extraordinary amount of federal COVID funding we advocated for and received to support a stronger MTA, building on the fiscal efficiencies we implemented and the successful approval of Central Business District Tolling. I know the strong gains we have made will continue under Sarah and Janno’s watch.”

The MTA, which has an operating budget of over $18 billion, will receive around $6.5 billion of COVID relief funds, which is expected to help them stave off the worst doomsday scenarios they had been projecting as recently as December.

Among the many projects on the horizon for the MTA are completing the 15-year long, $11 billion East Side Access project, which will connect the Long Island Railroad with Grand Central Terminal. In late May, Cuomo showed off the latest progress with the project, and said it was on schedule to be completed in 2022. Lieber, who oversees construction and development, has been running that project.

Less Than A Third Of NY Prison Staff Vaccinated Against COVID

As New York City enters a new phase of the COVID-19 pandemic, an unprecedented array of economic dev…