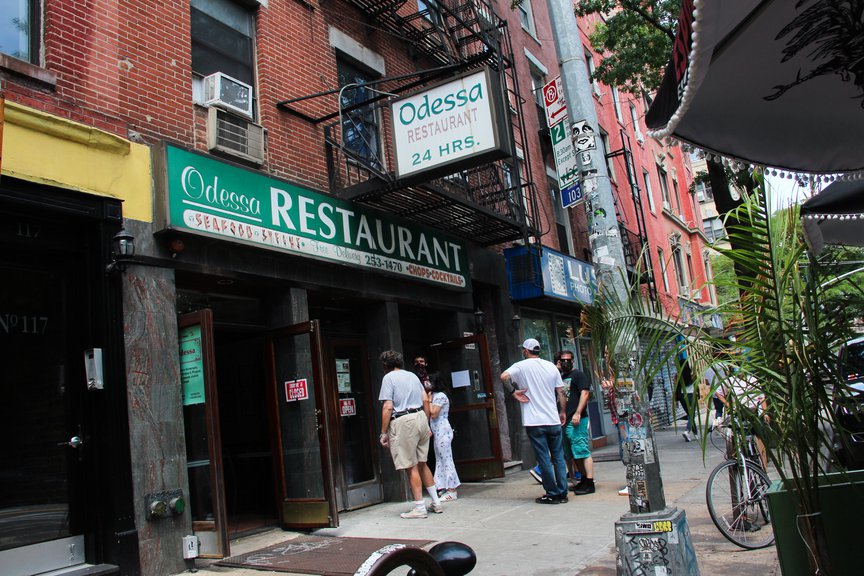 Beloved East Village Ukrainian diner Odessa Restaurant has been in pandemic purgatory for the past year. Last July news came that the Avenue A mainstay was closing, but soon after a beam of hope appeared when longtime co-owner Steve Helios told Gothamist that the restaurant was only shutting down for temporary renovations. “We’ll be back,” he promised. And co-owner Mike Skulikidis, who also owns the building, backed it all up, saying they would reopen in early 2021. Alas, that day never came.

After sitting empty for the past year, it seems things are irrevocably changing: Odessa is up for sale… on Craigslist.

The listing, which was first spotted by EV Grieve, states that the neighborhood staple is available to purchase for $400,000. The listing, which refers to this as a “great opportunity,” also includes over a dozen photos of the largely intact interior and exterior.

“Bustling business is located on a very busy street across from Tompkins Square Park and draws crowds with 24/7 service,” the posting reads. “Most of the business is walk-in with significant possibility for growth by creating a large take-out business. Great casual and quick dining options for a densely populated area. Alternatively, it can easily be converted to other dining concepts with full bar. The location is ideal. Seats 100 in the restaurant and 9 at the counter. Kitchen is fully equipped and in excellent condition. Full breakfast, lunch, dinner and late-night menu. New lease will be given to buyer.”

Gothamist has reached out to management and the Craigslist poster for more details.

One of the neighborhood’s last remaining 24-hour diners, Odessa Restaurant opened in 1994 across from Tompkins Square Park as an off-shoot of the adjacent Odessa Bar.

While the bar closed in 2013 due to rent increases, after 48 years in business, the restaurant held on and continued to serve a mix of reliable diner fare and Eastern European staples like pierogis and kielbasa to neighborhood locals and a solid late-night crowd.

Broadway Will Be Back This Fall. But Theater Safety Protocols Are Still Up In The Air.

The Playbill Weekend Streaming Guide: What to Watch June 4-6