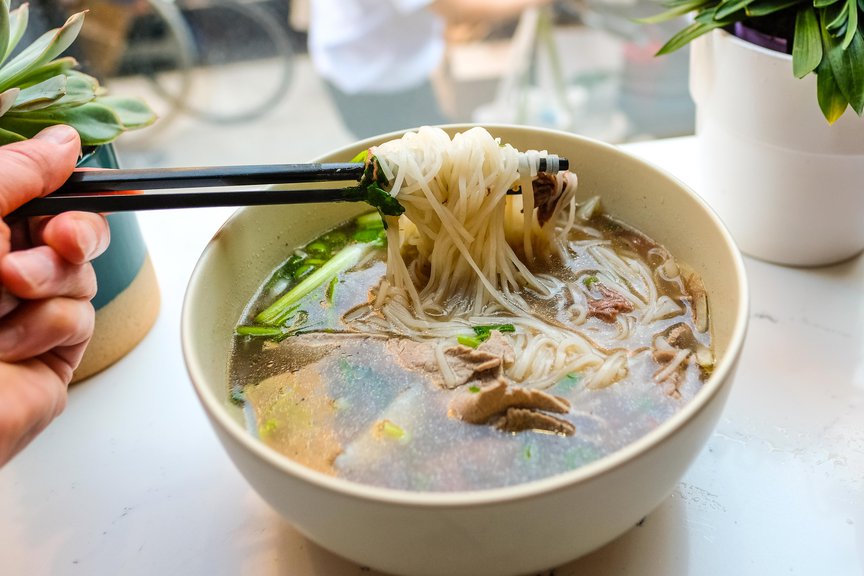 It’s not exactly “meet cute,” but it’s still a pretty good story. Ly Nguyen grew up on a farm in Khanh Hoa, Vietnam, moving to Saigon with her brother when she was 16 and, eventually, opening up both a restaurant and a beauty salon in that city. One day in the early 2010s a kid from Brooklyn named Patrick Lin wandered into the latter and… that was it, love at first sight, and in 2016 the couple got married and moved to Vinegar Hill together, where they live today with their infant son Liam.

Sweet, right? But the real reason I’m telling you any of this right now is that Nguyen happens to be an excellent chef, and she and Lin just opened a great restaurant in Dumbo called Em Vietnamese Bistro, a larger, slightly more ambitious sequel to their well-regarded original in Bensonhurst. And though you’d never know it when you’re sitting here all happy and feasting on the food, the couple’s journey to this point was as bumpy as the cobblestones down on Plymouth Street.

“Opening the restaurant during COVID was impossible,” says Lin. “Everything was delayed. It was just setback after setback when it came to construction and inspections. Luckily our landlord, Two Trees, was willing to work with us. It’s also been a challenge finding staff, particularly for the kitchen, but right now we’re just glad we got through it. We signed the lease in July 2019 and finally got the restaurant open after 22 months.”

Lin said they never closed their 86th street location during all of this, and “during the peak of the pandemic it was just my wife, me, and one of the partners working. When everything else was shut down in the neighborhood, it actually got really busy for us and we got discovered by a lot of new customers. We would stay at the restaurant until 2 a.m., then the next morning to buy supplies because a lot of wholesalers were closed too and weren’t doing delivery.” And adding to all that, “We also found out later that my wife was pregnant at the time.”

There are two sides to the menu at the Dumbo Em Vietnamese. The first shares many of the same dishes with the Bensonhurst original, a roster of comfort food classics that include several Bahn Mi (for now available only during weekday lunches); a platter of terrific Chicken Wings, all pungent and sloppy with garlic butter nuoc mam sauce; and a bunch of Nyguyen’s noodle dishes, like the bright and beefy Pho Bo Em that ranks among the best such bowls in town. Also very good was the Com Suon Nuong, a charred pork chop, sticky with nuoc mam and laid over a mound of broken rice, with a liver-y pork cake, called cha, nestled underneath.

The second, and perhaps even more exciting thing going on here are the Em Vietnamese Tapas, of which Lin says “we drew inspiration from what my wife and I would eat during nights out on the town in Saigon when we were living there. Locals would call it ‘di an oc’ which essentially means ‘to go eat mollusks.'” There are plenty of non-mollusk dishes to be had in this section, but probably the best thing I had was the Ngheu Xao Bo, or “Saturday night spicy Saigon style butter clams” which starred the most tender bivalves I’ve had in ages, bobbing in Nguyen’s heavenly broth.

Other tapas of note: Dau Hu Chien, a pile of extra crispy fried tofu in a “secret green sauce;” Bo Kho, which is Nyguyen’s rich and hearty version of a classic South Vietnamese beef stew; and, sleeper hit alert, the delightfully delicate Ca Tim Nuong, featuring strips of skinned grilled eggplant practically buried in cracked peanuts. They’re still waiting on the liquor license, but in the meantime the Em Vietnamese crew will be happy to make you a smoothie or mocktails like the Watermelon Cooler and the Soda Chanh, which is billed as “classic Vietnamese limeade.”

“It’s always been a mission of ours to serve Vietnamese food like it’s being served today in Vietnam,” says Lin. “It’s different from the food my parents grew up with 50 or 60 years ago, which my mom has often pointed out–they did not “go eat mollusks” back then–so some of the dishes may not be that familiar even to Vietnamese-Americans, but would be familiar to recent immigrants. Vietnamese food in Vietnam has evolved over the past 50 years and continues to do so. We’ll be adding more things to the menu as we go along, some will be traditional, some more experimental.”

The restaurant’s exterior has one of those unfortunate generic facades the landlords seem to like at street level of their residential buildings, but the interior is homey and warm. There’s no outdoor seating at present, and the inside tables are distanced until they can get those plexiglass barriers that allow restaurants to increase capacity. Em Vietnamese Bistro already seems to be a hot ticket with the locals–there was a wait for a table on Monday evening by 6:30–so you might want to get a reservation before heading here.

Em Vietnamese Bistro is located at 57 Front Street, between York and Main Streets, and is currently open on Wednesday through Monday from noon to 4 p.m. for lunch, and from 5 p.m. to 9 p.m. for dinner. Closed Tuesdays (718-875-7888; emrestaurants.com)