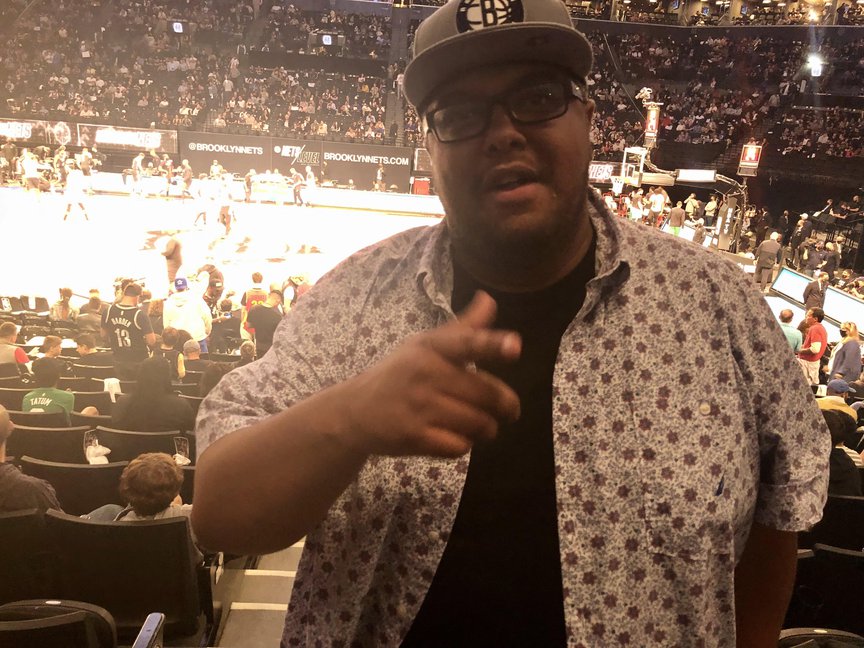 Comedian Gastor Almonte, rabid Nets fan and son of East New York, rolled up on the Barclays Center with the swagger of a man whose basketball heart had told him that the team from Brooklyn would crush the team from Boston and jump to the semi-final round of the NBA playoffs. It was Tuesday, day transitioning into night, a time for prophecy. “I think it’s over,” Almonte said. “I think we wrap it up tonight and then start resting the OGs.”

The OGs would be the team’s “Big Three”: Kyrie Irving, Kevin Durant, and James Harden. Each of them had missed time this season because of injuries; going into the playoffs, they’d started only a handful of games together. But now they led the Celtics 3-1 in this first round series, having looked dominant in their victories.

Almonte, looking forward to the game but thirsty for more action, had called his bookie and laid $100 down on the over of a combined score of 232. Tossing around such a sum, which he termed his extraneous “beer money” since he doesn’t drink anymore, felt extra satisfying given the memories that came over him as he stood in the plaza across from the Atlantic Center Mall.

“I worked for Frito-Lay and made delivery to those stores at the mall five days a week for four years,” he said. “I would get here at four in the morning, the same time the builders of this stadium were setting up for their day.” He remembers taking an hour off work to attend the Barclays Center’s groundbreaking ceremony in 2010. Until that moment, he’d been a Knicks fan. “It’s what we had,” is how he now explains his former hoops apostasy. “But I’m Brooklyn before that so when they announced we were getting our own team, I switched.”

Almonte, 37, was born and raised in East New York. His neighborhood isn’t known for producing stand-up comics, which, as he well knows, makes him professionally unusual. In one of his jokes, he observes that, “If you take an Uber from Bushwick to JFK, you know you’re in East New York when the driver remembers to lock the doors.”

His father is a Dominican immigrant who landed there in the 1970s and opened a laundromat, among other small businesses. Over time, he bought property and became a landlord. Almonte and his wife and two children live down the block from his parents and around the corner from his in-laws, a support system that allows him to do stand-up four or five nights a week. He says he was fiercely loyal to the borough at an early age and dreamed of doing something big to burnish its luster: “I wanted to buy a pro sports team, bring them here, and call them the Dodgers.”

As it happens, the Atlantic Mall, across from the Barclays Center, sits on the site of what was once slated to be a futuristic domed stadium for none other than the Brooklyn Dodgers. Visionary architect Buckminster Fuller was designing it in 1955 when the mighty Robert Moses scotched the deal. I pointed out to Almonte that the mall contains a sly and often overlooked architectural allusion to this could’ve-been-baseball-history: a stadium motif at the roofline, including pennant flags on poles. Almonte said thoughtfully, “That’s wild, I don’t know that story. It’s all the more reason that having a stadium and another pro team to represent the borough is so dope.”

The game itself proceeded as expected. At halftime, the Nets were up by the score of 51-42, which obviously pleased Almonte, although it put him way behind on hitting the over on his bet. He smiled confidently and joked that Kevin Durant would step up to take care of it in the end. “He’s sending me the eye-look that means, ‘I’m working on it.’”

The pace of play accelerated in the second half with the Nets stretching out their lead by means of a flurry of emphatic slams, obnoxious blocks, and cold-blooded threes. The fans in the nearly packed house, many of whom were maskless after showing proof of vaccination, waved white towels emblazoned with the Nets’ black logo and roared as time wound down. With a minute to go, Almonte needed someone to hit a three-pointer to break even on his bet, or score two buckets to make him a winner.

It was not to be.

Amonte was fine with that. “Nothing better than a win,” he said as the stadium announcer loudly gushed: “Fans! Make sure you’re back at the Barclays Center to watch your Nets take on the Milwaukee Bucks in the Eastern Conference semi-finals!” The team won, 123-109. Almonte gleefully added, “Round 2 here we go. Bucks are gonna get it, too!”

Afterward, back outside on the plaza, our man reflected on the night: “This was a blast, man. It’s exciting to have the Nets here and I really think Brooklyn needs it culturally: a team to root for. I know it ain’t the Dodgers but hopefully it builds to that tradition over the next 40 to 50 years.”

As previously announced, the Broadway League and American Theatre Wing have secured a date for the 7…