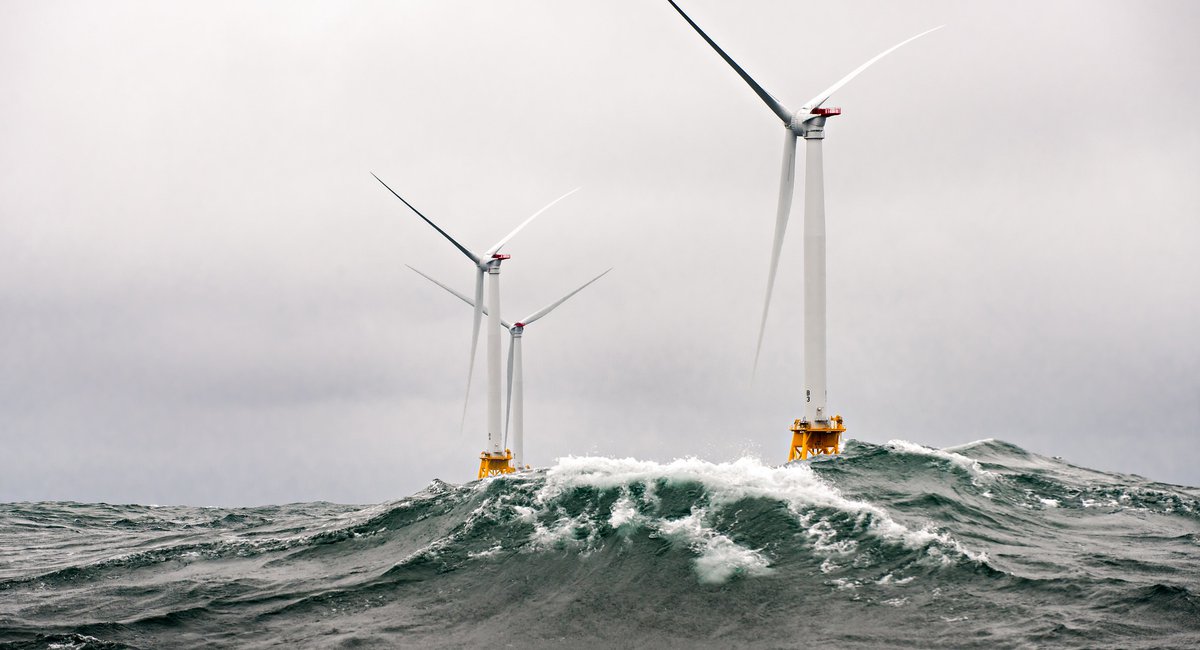 This article is part of our One Issue Explainer series, where we break down mayoral candidates’ stances on issues concerning New Yorkers. What do you want to hear about? Email us at tips@gothamist.com (subject line: One Issue Explainer)

The next New York City mayor will lead the boroughs through its COVID-19 pandemic recovery while another crisis grows—climate change.

Coastal waters could rise by 9.5 feet by the end of the century. Extreme weather is intensifying. And increasingly hot temperatures will exacerbate the health consequences of heat waves, especially among low-income and older residents.

Hurricane Sandy in 2012 devastated waterfront neighborhoods, requiring major infrastructure overhauls. Many of these projects remain ongoing or are in their planning phases. As the city and New York State maneuver to slash carbon emissions and shift to renewable energy, the need for a massive new workforce will increase.

In this edition of our One Issue Explainers, we look at how New York City’s Democratic mayoral candidates plan to rise to the challenge, and we’ll focus on reducing the city’s reliance on fossil fuels. Here’s a summary of their energy plans:

Adams’ climate plan is centered around transforming the city into the wind power hub of the Northeast. Adams wants districts like the South Brooklyn Marine Terminal—where plans for a wind turbine maintenance hub are already underway—and the Brooklyn Navy Yard, Staten Island waterfront and the Red Hook Container Terminal to help the state pivot to offshore wind energy and attract industry jobs to the city.

He has committed to expediting approvals, authorizations and funds to jumpstart facilities for wind turbine maintenance, training programs and other wind infrastructure, though he hasn’t specified a dollar amount. City Hall would create a wind power development team as well.

“There is no reason New York City shouldn’t be a leader in wind power,” Adams said in an April statement. He would place a training hub in Sunset Park, near the Brooklyn terminal, to help residents learn necessary job skills. He pledged to set aside $5 million to train 1,000 workers.

His other proposals include educating tenants and property owners about rooftop solar options, investing in electric battery storage to reduce reliance on gas-powered peaker plants, which his administration would eventually decommission.

Advocacy groups say one crucial policy would be reducing the greenhouse gases created from buildings’ energy use. They cite the 2019 Local Law 97 mandating many buildings reduce emissions or otherwise face fines. When asked how he’d protect the law at a March forum organized by climate groups and unions, Adams said, “[W]e need to make sure that it’s not changed…And then we should build upon the law.”

Under a Donovan administration, he would draw from his experience as the secretary of Housing and Urban Development under former President Barack Obama and the climate-oriented legacy of former Mayor Mike Bloomberg, according to the plans listed on his website.

Following Hurricane Sandy, he led Obama’s rebuilding task force that reimagined Manhattan’s waterfront. This plan has changed drastically since its onset but eventually led to storm protection efforts on the east side.

He has committed to creating a New York City Climate Corps—a clean energy and resilience jobs program spun off from an Obama-era AmeriCorps program.

Environmental justice is listed at the forefront of his proposals through an executive order that would require an equity-minded lens to be applied to policies and mayoral appointments. He is committed to closing natural gas peaker plants in New York City, wants to audit what jobs are needed to implement an emissions reduction law on buildings (Local Law 97) and plans to explore turning Rikers Island into a space for “uses like green energy, a 21st century wastewater treatment facility to clean our water, composting and possibly even new public space,” his website reads.

At a March forum, he said Rikers could be a training center for formerly incarcerated people—tied to his green climate jobs proposal. “I’ve committed to building over my first term $3 billion a year of investments in community-based programs that could go to transforming Rikers and our criminal justice system more broadly,” he said in March.

Garcia’s vision is built on progress she’s contributed to city government so far. She served formerly as the city’s sanitation commissioner under de Blasio from 2014 to 2020—and faced early criticism during her mayoral run, after the pandemic and the city’s budget crisis caused trash to pile up and forced cuts to compost collection. Now, she’s got the New York Times editorial board’s endorsement and has billed herself as the “get shit done” candidate. Last week, she also picked up the endorsement from the statewide advocacy group, New York League of Conservation Voters.

On her campaign website, she touts stopping the use of heating oil No. 6—a type of fuel for heating homes and buildings that emits health-harming pollutants—while at the Department of Environmental Protection. Her mayoral plans include public incentives for installing electric heat pumps—a technology that would help property owners pivot from natural gas to heat homes.

Another of her major proposals would drastically expand the number of city electric vehicles. She also wants to transform Rikers into a renewable energy zone—installing solar panels, storage batteries for electricity, compost sites and charging stations for city vehicles. She wants to convert the city’s food waste into electricity, like an existing facility in Newtown Creek.

“We will make sure that we are looking at all of our policies through the lens of climate change,” Garcia said at a March forum.

Read More: What NY’s Offshore Wind Expansion Could Mean For Your Electricity Bill, Curbing Emissions, And Your Health

McGuire has few plans on his campaign website about climate change. While he has mentioned climate resiliency as a part of his platform, he has done so without in-depth details.

He wants to accelerate the construction of resilient and sustainable infrastructure in the city, “with a focus on Sandy-impacted neighborhoods like Coney Island, Hunts Point, Lower Manhattan, Red Hook and the Rockaways.”

When asked about achieving a Zero Waste goal, he said he’d focus on composting. In a Waterfront Alliance questionnaire, he wrote that he would “invest in green energy projects, especially those that unlock permanent job opportunities like the development of a wind energy hub in South Brooklyn and the North Shore of Staten Island, which will boost maritime industrial jobs.”

He doesn’t support banning the development of carbon energy infrastructure, but McGuire told Gothamist through a campaign spokesperson that fossil fuels “must be phased out, including gas pipelines.” He added, “if that’s done abruptly without investing in widespread alternative sources of energy, then not only could we face disruptions to the city’s energy grid, but the impact of rising prices will fall disproportionately on the city’s lowest-income residents.”

She proposes an urban climate corps plan that would mirror the Works Progress Administration, a Depression-era jobs program. Her plan would emphasize jobs in urban gardening, sustainability and renewable energy, and City University of New York would serve as a “central partner for research and development projects.” Morales said she would use an executive order to expand eligibility for municipal jobs and training programs to those with criminal records, which would build on a current law that prohibits employers from inquiring about criminal history until after a position has been offered.

She also wants to develop strategies to strengthen public power and electrify public transportation. Her proposals also include planning for a managed retreat, waterfront buyouts and advocating for offshore wind energy.

To fund climate-minded projects—from clean energy to waterfront infrastructure—Morales pledged to create a “green and blue” bonds program for financing such projects.

Stringer has committed to banning any new development of fossil fuel infrastructure and to eventually retiring existing pipelines, gas storage and the 18 peaker plants in the city. Under his administration, half of the city’s peaker plants would be shuttered by 2028 and the other half by 2035.

He wants to ban natural gas and oil use in new construction or renovations. He supports a green and blue bonds program. Stringer would end the use of heating oil No. 4 altogether by 2025, building upon prohibitions for heating oil No. 6. The former is a polluting fuel that made up less than 1% of greenhouse gas emissions in the five boroughs in 2019.

“If we do not center climate justice in our COVID-19 recovery, we’re only going to end up exchanging one crisis for another,” Stringer said at a March forum. “The truth is, the next mayor is going to have a tremendous, once-in-a-lifetime opportunity to save this planet.”

Wiley’s plan expands on existing efforts—with goals to enforce current laws and supplement them with advocacy groups’ proposals. During a March forum, Wiley said her climate plan is “about centering the kinds of things we already have to build from in this city.”

Wiley wants to match or surpass the state requirement that all electricity be free of carbon emissions by 2040. She has proposed pushing beyond this point to reach “carbon negativity.” That would mean rolling out efforts to absorb carbon from the atmosphere. These initiatives would include restoring the city’s wetlands.

On the topic of greenhouse gas reduction, she wants an approach that considers New Yorkers’ consumption too—meaning the city would include “emissions that occur along production chains of goods and services coming from outside the City” in its measurements of local carbon usage.

A “green workforce investment” would partner with existing career development programs—Green Workforce Program and Helmets to Hard Hats New York, for instance—to train people for “green jobs.” This project would be funded by President Joe Biden’s federal COVID-19 relief package, the American Rescue Plan. On her campaign website, her team says the bill could provide $7 to $10 million in career programming for “hundreds of thousands of New Yorkers.”

She would also provide a $3 billion investment toward turning Rikers into a renewable energy and energy storage hub, coastal flooding resiliency and extreme heart mitigation projects over three years.

To do so, Yang wants to streamline the permitting process for any green infrastructure, mainly to store electricity in large-scale batteries on city-owned land. In April, he joined the Microgrids Network to break ground on a battery storage system in Williamsburg and announce his commitment to cut the approvals process in half.

“We are going to build our way out of the immediate economic crisis and the urgent climate crisis,” Yang said in a statement at the time. “As Mayor, I will hire more permitting staff, build in-house expertise on priority project types like new energy systems, direct city agencies to simplify the permitting process, and put in place technology to improve coordination and provide transparency.”

He also wants to electrify all city-owned vehicles by 2035 and expand the Community Retrofit NYC program to allow low-income communities to benefit from energy-efficient building upgrades.

The Theatre Channel is back with a sixth episode, available now on demand on Stream.Theatre. Episode…