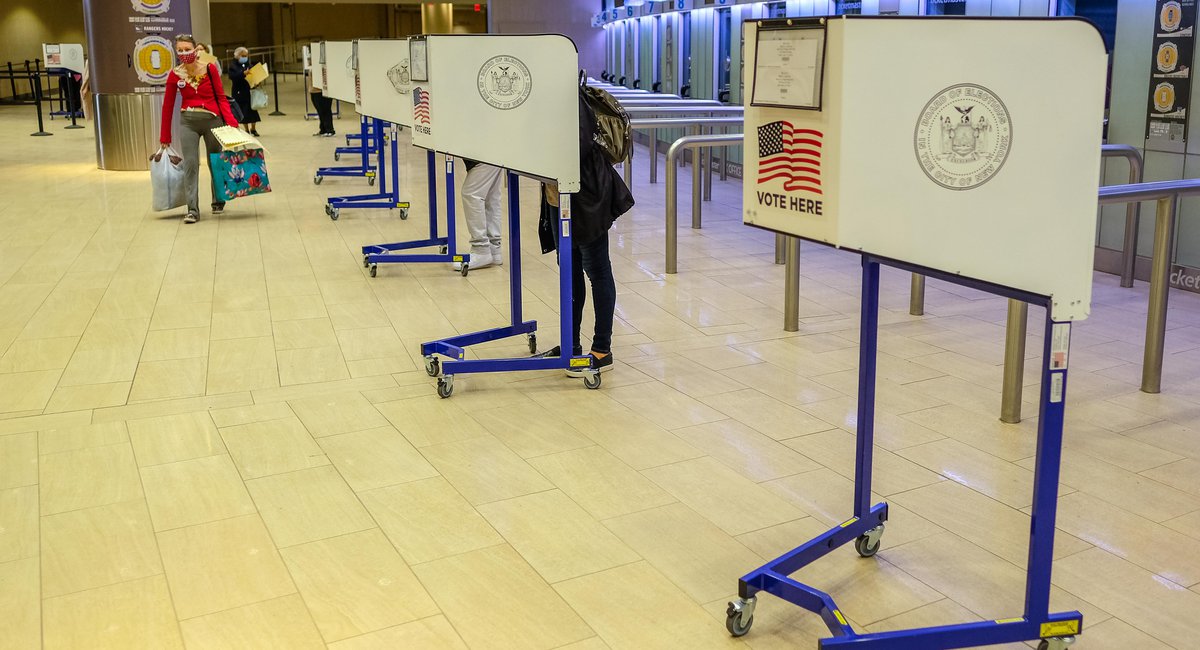 New York City candidates for mayor are competing aggressively for the often fractured Latino vote. With no one having fully secured this vote yet–expected to make up 20% of the electorate–mayoral hopefuls are increasing their efforts in these final weeks of the race, as the June 22nd primary quickly approaches.

Shaun Donovan released an ad that appeared on Spanish media. Unlike his rival mayoral candidates, Donovan speaks Spanish in the ad. And he demonstrated his Spanish-speaking skills on Saturday at la Iglesia Aliento de Vida, the largest Spanish-language church in the city.

Andrew Yang received backing from local Latino lawmakers who helped amplify his message across the Bronx and Brooklyn. And Ray McGuire released a website available in Spanish.

But a barometer of just how important support from the Latino communities came last week when Eric Adams won the endorsement of Rep. Adriano Espaillat, the powerful Dominican-American congressman who had initially endorsed city Comptroller Scott Stringer before a sexual harassment scandal led Espaillat to rescind it.

Espaillat represents Upper Manhattan and parts of the Bronx, home to a large swath of Spanish-speaking voters. Standing nearby at the announcement was City Council Member Ydanis Rodriguez, the first Hispanic lawmaker to endorse Adams, who said his base of Dominican voters would mobilize and “be making a difference,” in the mayor’s race, claiming they would carry Adams to victory. Earlier in the campaign, Adams was endorsed by the popular outgoing Bronx Borough President Ruben Diaz Jr.

There is no doubt that Latino/Hispanic New Yorkers are a critical swing vote this election cycle, mayoral campaign volunteers and political analysts told Gothamist/WNYC. They account for about 20% of eligible votes and, while the various communities that fall under the Latino and Hispanic labels span the political spectrum. As a group, they are up for grabs with polls showing they largely remain undecided.

“If the tradition in New York politics holds, which is that the Hispanic vote will break late in the campaign and decisively in whatever direction it goes, it will […] be the decisive final determiner of who wins this primary,” said Bruce Gyory, a veteran Democratic strategist.

He noted other ethnic and racial voter blocs were divided. “Black voters, you have to figure, are gonna divide between Adams and Wiley and [Ray] McGuire,” Gyory said. “Clearly, Asian voters are going to be lining up with [Andrew] Yang. Kathryn Garcia and Stringer seem to be doing well with certain aspects of white voters. And the progressives are divided. So, when you have all that division […] the biggest open bloc is the 20% or so that is likely to be Hispanic.”

Gyory noted that the only Hispanic candidate in the race, Dianne Morales, who identifies as Afro-Latina, has relied less on her ethnic roots than on progressive politics. Several polls showed Morales with single-digit support among all voters despite often making her pitch at campaign stops in both English to Spanish.

Hispanics make up about one third of the population in New York City, with Dominicans outnumbering Puerto Ricans by several thousand. Of that number, 22% are of voting-age, according to CUNY Prof. John Mollenkopf. Those numbers, based on an analysis that identified Hispanic voters by last name and census data, have grown since the 2013 mayoral election when exit polls showed Hispanic voters made up 18% of all voters.

“The Hispanic vote is kind of like a sleeping giant that people haven’t awakened yet, or circumstances haven’t awakened yet,” said Mollenkopf, the director of the Center for Urban Research who has been tracking the political impact Hispanics have made in New York for decades.

Turnout among Latino/Hispanic voters has increased over the years, however—an analysis of 2018 election data for that year’s New York elections showed Hispanic voter participation increased to 20%, compared to 17% for the 2014 elections.

In 2005, former Bronx Borough President Fernando Ferrer became the first Hispanic Democratic nominee for mayor. While he attracted Hispanic voters, Ferrer still lost to Michael Bloomberg who had lured 3 in 10 Hispanics to vote for him. His loss made clear that the Hispanic vote wasn’t monolithic or easy to predict: Beyond Puerto Rico, the Dominican Republic, and Mexico, there are large communities from across Latin and South America living in New York, and they span the political spectrum.

Endorsements are a key element to candidates’ strategy to draw Hispanic voters but these too are fragmented. Rep. Ritchie Torres, an Afro-Latino, and Council Member Carlos Menchaca, who is of Mexican descent, are backing Yang. Wiley is endorsed by Rep. Nydia Velazquez, who is Puerto Rican. State Senator Gustavo Rivera, who is Puerto Rican, endorsed Morales.

“If Hispanics are going to want to impact this election, they’re going to come out in large numbers, and they see where their elected officials are going and that may play a role,” JC Polanco, a Latin Studies professor at Borough of Manhattan Community College.

Many candidates have aggressive ground games in the Bronx where census figures show 56% of the population is Hispanic, more than any other borough. Though he’s made no endorsement yet, Socrates Caba, head of the Louella Hatch Club in the west Bronx, a political organization, said the endorsement of the borough president carries weight.

“Diaz Jr. has done a lot in the Bronx for all, and particularly the Latino community. So I would believe the way that he would guide other folks, Latino folks, in how they would make their choices,” Caba said.

Beyond Latino and Hispanic lawmaker endorsements, other candidates have leaned on family connections. Stringer, who is white, has featured his Puerto Rican stepfather in television ads. Garcia, also white and not of Hispanic descent, routinely mentions her ex-husband and kids are of Puerto Rican descent.

Polanco said that the issues most important to Hispanics were public safety, education, and jobs. With crime increasing across the city, a candidate with a plan to fix it would appeal best to Hispanic voters.

Gerson Borrero, a political analyst for NY1, took the list of concerns a step further, adding “nuts and bolts” issues, such as housing affordability and getting around the city are key concerns.

“How do you make the city livable, or at least decent enough for me to survive and try to still make it here, to get a job to do this, to do that, and the reality of people wanting to get that minimum wage raise to $15?” Borerro said. “People are gonna vote for the person that can get sh-t done.”

The next televised debate—happening this Wednesday—is co-hosted by Univision 41 Nueva York, the largest Spanish-language television station in the city.

4 Times Couture Fashion Designers Took Their Talents to the Stage

Outside City Hall on a recent afternoon, Borough President Eric Adams stood in a pinstripe suit and …