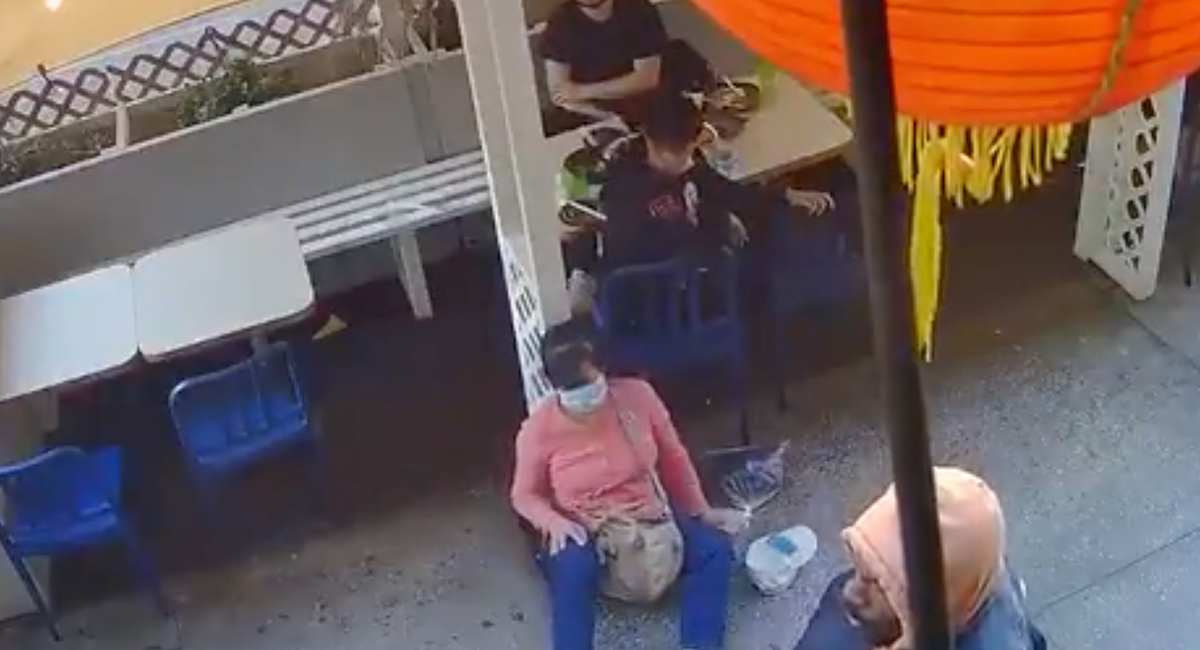 Police have arrested a man accused of punching a woman on a Chinatown sidewalk. The Monday evening attack was caught on video and shared by State Senator Yuh-Line Niou, who represents the neighborhood in her district.

This was just sent to me from my constituent. This just happened in my district in Chinatown. He has been arrested and our precinct is investigating. pic.twitter.com/sxNfCbrlza

According to the NYPD, officers responded to a 911 call outside 65 Bayard Street, between Mott and Elizabeth Streets, where they found a 55-year-old woman who had been punched in the face without provocation. The suspect was apprehended near Bayard and Bowery Street; a witness posted on his Instagram that he followed the suspect and alerted police officers to his location.

Alexander Wright, 48, was charged with assault as a hate crime, assault, and criminal possession of a controlled substance; authorities say they found K2 on him when they took him to Bellevue Hospital for an evaluation. WABC 7 reports that Wright has 17 prior arrests, including recent ones for allegedly throwing a brick at a business and scratching a man’s eye, both on the Upper East Side, and was wanted for throwing hot coffee on traffic agents in January.

I don’t disagree with you AT ALL. This is so hard to watch knowing we just keep failing here.

So glad she will physically be ok. The mental trauma associated has to be nerve racking

On Tuesday morning, Police Commissioner Dermot Shea discussed the incident on NY1, saying of Wright, “He’s randomly assaulting people. What are we doing in society when we are releasing these people right back onto the street? It’s craziness.”

Mayor Bill de Blasio was asked about the incident during his Tuesday press briefing. While he had not seen the video, he said, “I’m certainly deeply concerned, we’ve had a spate of horrible attacks against Asian Americans. They are unacceptable.”

The tweet from Niou attracted attention from right-wing figures like Mike Cernovich and former NYPD commissioner and one-time felon (before President Trump pardoned him) Bernard Kerik, who claimed the suspect would be immediately released due to bail reform. Elected officials responded, explaining how bail reform actually works.

This crime with all due respect bail eligible. As a former police commissioner you should know about what that crime could be charged. It is extremely disrespectful to call an assemblywoman a moron. Totally out of line and you should apologize.

The victim was treated at a hospital and is now at home. Her daughter told the Post, “She’s doing OK.”

There have been 86 hate crime incidents against Asians this year so far, compared to 19 during the same period in 2020.

Mister Dips Bring Its First-Rate Burgers, Fries, And Soft Serve To The Seaport

A 61-year-old Asian man who was brutally attacked in East Harlem is now in a medically induced coma,…

The Metropolitan Opera, amid a continued shutdown, enters its second year of offering free streams t…