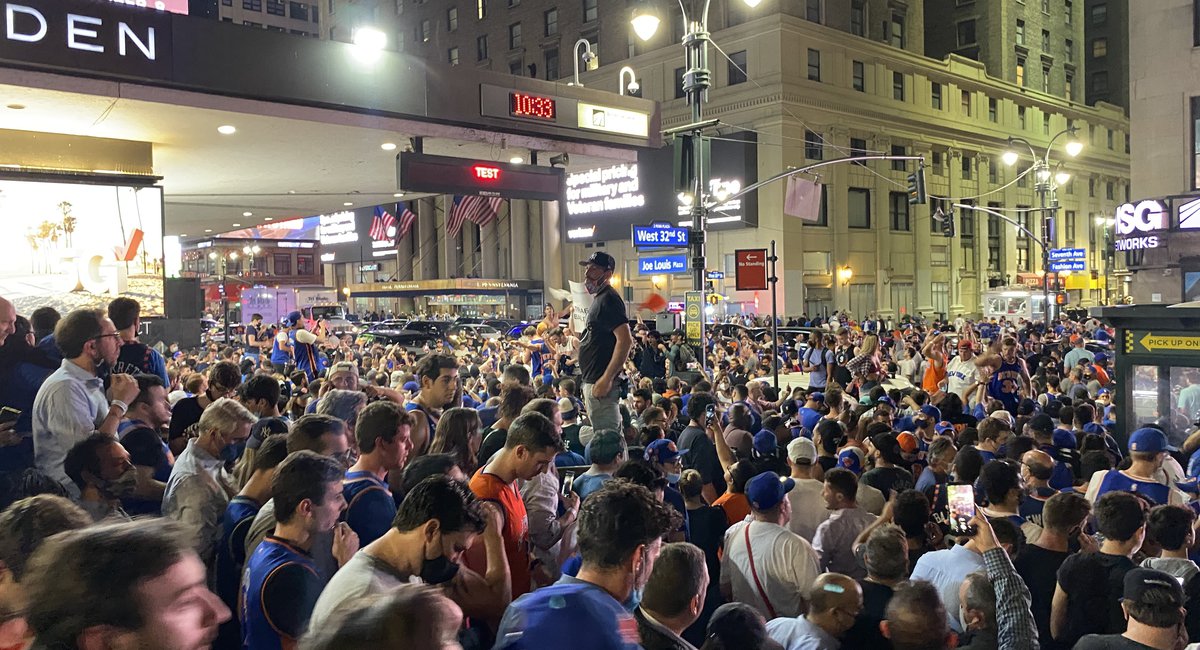 The New York Knicks notched their first playoff victory in more than eight years on Wednesday night, a bruising home-court triumph over the Atlanta Hawks that sent thousands of long-deprived fans parading onto Seventh Avenue.

The 101-92 game, which the Knicks trailed for most of the night, evened the first round series at 1-1. Derrick Rose led the way with 26 points off the bench, and Reggie Bullock kicked in some key three-pointers and much-needed defense on Hawks star Trae Young, who has relished his role as the NBA’s “newest villain” this week.

As the Knicks pulled ahead, an electrifying dunk by rookie — and Brooklyn native — Obi Toppin brought the roaring Madison Square Garden faithful to their feet. For the first time in recent memory, the world’s most famous arena shook under the weight of jubilant Knicks fans witnessing playoff success.

“It’s amazing,” Knicks leader Julius Randle, who’s struggled in both games, said in an on-court interview. “You guys pushed us through the whole game.”

The mid-1990s Knicks anthem (“Go NY Go”) made a welcome return, and a jumbotron message urging fans to be courteous was flagrantly ignored. In addition to some explicit chants about Young, who dropped 30 points, attendees also introduced the new “Trae is balding” chorus. In one particularly ugly moment, someone appeared to spit on the Hawks star. [UPDATE: The fan has since been indefinitely banned from the Garden.]

(That was far from the only lousy fan behavior on display this week as more people returned to arenas. On Wednesday night, a Philadelphia 76ers fan dumped popcorn on Russell Westbrook as he exited a game with an injury; earlier in the day, Brooklyn Nets point guard Kyrie Irving warned of “subtle racism” from Boston Celtics fans.)

There were 15,000 people — 90% of them vaccinated — on hand for Wednesday night’s sold-out playoff game at the Garden, seemingly all of whom spilled out onto Seventh Avenue in the aftermath to salute their heroes.

The raucous crowd moshed and swayed from scaffolding, eliciting supportive honks from passing cab drivers. They chanted hopefully about a future match-up against the Brooklyn Nets — a scenario that would require closing out the series against the Hawks, then (most likely) upsetting the formidable 76ers.

But for a brief moment in the sticky Manhattan night, all of the frustrations and routine disappointments that have for so long defined Knicks fandom seemed to melt away.

The Knicks will play Game 3 in Atlanta at 7 p.m. on Friday night.

Open Streets Are Here To Stay. Not Everyone's Thrilled About It

Read on for more theatre headlines you may have missed in today’s news. Glee Stars Will Reunit…