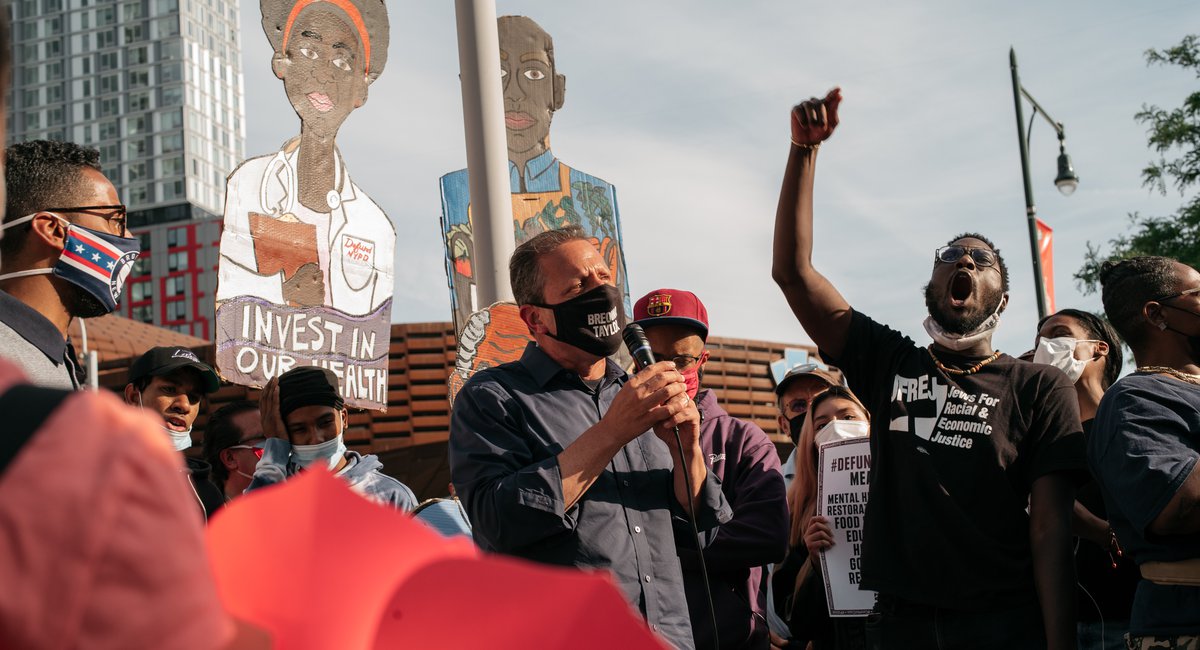 Thousands of demonstrators took to the streets across New York City on Tuesday night, marking the one-year anniversary of the killing of George Floyd by Minneapolis Police Department officer Derek Chauvin, who in April was convicted by a jury of murder and manslaughter. Marches, rallies, and vigils around the city paid tribute to Floyd and demanded an end to systemic racism in American law enforcement, including the NYPD.

One gathering of hundreds in Central Brooklyn, organized by a coalition of grassroots groups including Make the Road New York, Citizen Action, VOCAL-NY, and Equality for Flatbush, carried a specific, clear message: defund the police. For Maya Meredith, the night was a personal milestone: after a year spent isolating due to an existing health condition, she was participating in her first protest since Floyd’s death.

“Defund and abolish has become so much more mainstream than it was before, and so many more people are starting to understand how broken the system is,” Meredith, 28, said. “Having been to the marches in 2014, it’s amazing to see how people’s thinking about this has changed.”

Beginning at Atlantic Center near Barclays and moving through Clinton Hill and into Bed-Stuy, Tuesday’s march featured numerous signs and chants that expanded on the defund demand to include the specific reinvestment of city money spent on policing into public services and community programs. Inside of Barclays Center, the Nets and Celtics held a moment of silence to mark the anniversary.

Before the Nets’ game against the Celtics tipped, a moment of silence was held in Barclays Center to mark the one-year anniversary of George Floyd’s murder. The Celtics huddled together in a circle with their arms around each other during it. pic.twitter.com/RhXFzGvlzJ

“Education, housing, and food equity has been neglected. Young generations need to get the funding that they need, and if that means defunding the police, then that’s going to happen,” Matthew Beeston, 20, of Crown Heights told Gothamist. “When it comes to protection, it’s not police. The idea of putting money into what brings up people–not keeps them down–is catching on.”

With the city’s local Democratic primary less than a month away, numerous mayoral and City Council candidates have folded the strategy of cutting police spending and adding funds to community programs into their electoral platforms. Former Queens District Attorney candidate Tiffany Caban, who is now running for the City Council’s 22nd district, marched and chanted along with organizers Tuesday.

“It’s important to be here in solidarity with the Floyd family, with the family of every single person who’s been murdered by the police,” Caban said. “But also to say that we have not achieved justice. I think it’s important to remember that from the day that Goerge Floyd was murdered to the day his killer was convicted in a trial, we experienced an average of three police killings per day.”

Family members of people who have been killed by the police were in attendance at the Brooklyn march, according to the NY Times, “They included Eric Vassell, the father of Saheed Vassell, who was killed in Crown Heights in 2018, and Hawa Bah, the mother of Mohamed Bah, who was shot by officers in Harlem in 2012.”

“Defund is not just about the police, it’s about everything else. Defund is quite frankly about rejecting austerity,” Caban added. “Because when you don’t invest in a robust public health infrastructure and social safety net, then all you’re left to do is throw policing at every problem.”

Unlike last year’s protests, police remained at a distance behind the Brooklyn march as it moved East, eventually ending at Herbert Von King Park and transitioning to a program of speakers, including Public Advocate Jumaane Williams and Working Families Party National Director Maurice Mitchell. Both praised demonstrators for remaining active throughout the year, while acknowledging the movement’s work as far from finished.

“It wasn’t until last year that I specifically started learning about defund, and understanding the systematic way in which the police have always been created to stifle social movements,” Meredith remarked. “I think a lot of people are getting more understanding of that, that this is a battle that has to be fought constantly.”

How To Watch The Republican Mayoral Debate