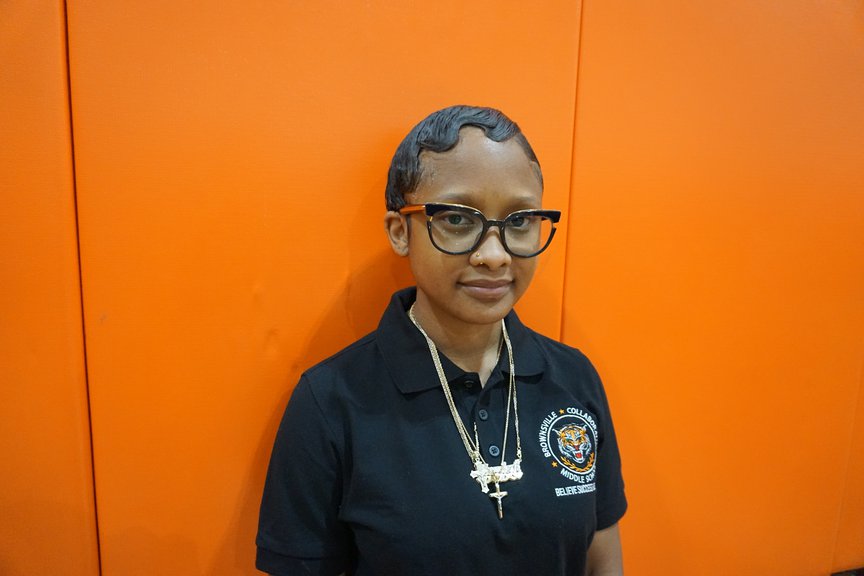 On an evening after school, students from the Brownsville Collaborative Middle School sat in orange chairs in a semicircle spread out across their wooden gym floor. They had just heard from the NYPD’s new Chief of Department Rodney Harrison about his vision for community policing and youth development. Now, it’s their turn to speak.

Walking around with a microphone in her hand, a lieutenant in a white shirt asked the students, who are almost all Black, what words come to mind when they think of the police. “Police brutality,” one girl offered. “They might use excessive force upon me,” a young boy said.

Next, the lieutenant asked what they think of firefighters. “They’re going to help me no matter what,” another middle schooler said. “Someone to help you when you actually need help,” adds a boy sitting next to him.

Addressing the longstanding distrust between police and young people in low-income, non-white neighborhoods, like Brownsville, is what this event is all about for Harrison, who became the NYPD’s top uniformed commander — and one of its highest ranking Black officials — in March. This event is part of a larger city listening tour and accompanying enrichment program the Chief of Department is spearheading to foster ongoing relationships with the NYPD.

After attending dialogue sessions with police and community leaders, young people can connect with mentors, enlisted by the department, and sign up for NYPD-coordinated classes ranging from conversations on emotional intelligence and domestic violence to courses on wig making and coding. Students earn money for attending courses.

Harrison’s normal work entails overseeing the performance of the department’s 36,000 officers and its six major bureaus in preventing and solving crime. But the new chief sees this program as a softer strategy within the NYPD’s traditional public safety mission. Instead of solely relying on arrests and convictions, the program is designed to offer young people real development opportunities, broadening their horizons and giving them economic scaffolds to stay out of the streets.

“I’m going to make sure I help you get to wherever you like. You may say, ‘Listen, I have no interest in becoming a cop, but I want to do something else that they may be able to provide,’” Chief Harrison told the students during his speech. “We’re going to make sure you get that mentoring.”

The listening tour, which will make stops in neighborhoods suffering high rates of violent crime, comes as New York City struggles with a relative resurgence in gun violence. Harrison argues programs like this could tamp down on shootings in the long run by giving teenagers in tough neighborhoods a way to avoid gangs and the deadly street rivalries that sometimes accompany them.

But the department’s critics note that the initiative also follows last summer’s mass protests over the police murder of George Floyd in Minneapolis. In New York City, and across the country, Black Lives Matter activists called for defunding the NYPD and investing in social services similar to the ones the NYPD is now promising to expand.

“The protests that we saw last summer calling for the defunding of the NYPD really created a legitimacy crisis within the police department,” said Alex Vitale, a Brooklyn College sociologist who advocates for redistributing money from the NYPD to other city agencies. “These efforts to wrap itself in community meetings and outreach to young people and social services delivery is an effort to win people back over to police-centered strategies for creating public safety.”

The anger that erupted last summer carried through to the evening listening session in Brownsville. Many students brought up George Floyd and their frustrations with police practices they had seen on social media and in their own lives.

But they also spoke of street violence within their own neighborhoods, and their desire to be treated with dignity by the officers at their local precinct.

“The cops, they only see what they think. They don’t see us like this. They don’t see our knowledge, and what we can do and how smart we are,” said Kemiah Frazier, a high school student who attended the event as a Brownsville Collaborative Middle School alumna. This unfamiliarity, she continued, leads to hostility from officers when the time comes to address an issue on the street. “They correct us in a bad way because they think we’re going to harm them,” she said.

Melvin Gravenhise, a seventh grader, told Harrison the department should do a better job testing recruits to make sure they’re the right fit for neighborhoods like his. “Maybe put the cop or soon-to-be cop, put them in a position with people from different backgrounds and cultures and see how they react,” he said.

Harrison told the students he knows the NYPD has a lot of room for improvement.

“There are certain cultures in law enforcement that we have to destroy,” he said, describing the difficulties of getting buy-in for a new vision from his executives, commanders, and rank-and-file. “I wish I could do it overnight. But it’s something that I’m working on.”

Growing Up With Similar Fears

Harrison says he emphasizes the students’ concerns because he also grew up distrusting police. As a young man, he remembers being stopped in a car while out one day with friends in Harlem. An officer took him out of the car, pushed him down to the curb, and put his foot or knee on his back to make sure he could not move.

“That was a very, very disappointing interaction,” he says, pausing between words.

Listen to WNYC’s George Joseph speak with Chief Rodney Harrison about his distrust of the police when he was young and why he’s reaching out to young New Yorkers now:

Growing up in Rochdale Village, a co-op in Jamaica, Queens, Harrison never considered becoming a police officer. But at the urging of his father, who told him he needed to find his own financial support for another year in college, he enrolled in a police internship program that he intended to use just for the tuition benefits.

He was so embarrassed that he kept his involvement a secret from his friends. But while there, he says, he attended an event that changed his vision of what policing could be.

“It was an event like this where I was blown away. I was like, ‘Cops can actually do this for a living? They can actually work with the youth?’ There was a cops and kids basketball game afterwards and it was really something special just to see how police officers were giving back,” he recalled.

Harrison believes “getting back to the basics” by expanding events like this could foster greater trust in his force. At the same time, he’s also hoping that mentoring and enrichment programs will help young people avoid criminal activity and damaging contact with the criminal justice system in the first place.

Throughout the de Blasio era, progressive activists excoriated the NYPD for tackling alleged gang violence by rounding up large numbers of poor, Black and Latino men, who were prosecuted for vague affiliations with neighborhood crews.

Harrison insists that gang violence is still a major problem, and blames the recent uptick in shootings on gang rivalries across the city. The listening events, he says, are a form of counter-recruitment, which he hopes diverts young people from crime, violence, and gangs.

“In order for their game to be successful, their recruitment has got to be strong. The bigger the game, the better that they are,” he said. “Hopefully, this conversation today will persuade them not to gravitate into that problematic gang.”

Bryan Skerret is a youth mentor working with “Options,” one of the NYPD programs students can join. The 18-year-old Brownsville native helps lead group sit-downs where teenagers can share and process the difficulties in their lives. He believes small, therapeutic sessions like these can help release the pent-up frustrations that can drive young people to carry guns for protection, or to feel a sense of power while going through loss or abuse.

“Let’s say you have a gun in your possession, it’s illegal, you’re upset that something just happened,” he says. “You don’t have nobody to speak about it with. So now you’re a guy, you’re balling that up, and you go outside with that gun. Somebody looks at you the wrong way. You’re arguing. You take it out. Boom. Because you are so angry, you didn’t let it out, you didn’t speak about it, your whole life changed.”

Vitale, the NYPD critic, contends other city agencies could ensure better delivery of such critical services because many groups may not choose to access a program coordinated by the police department. “You’re excluding those populations who have a fear or distrust of the police department, undocumented folks, young people who’ve had bad experiences with the police, et cetera,” he said.

Jeffrey Butts, director of the Research & Evaluation Center at the John Jay College of Criminal Justice, welcomed the NYPD’s interest in expanding social services. “We have many, many things we involve young people in, each of which has a small effect, but all together they produce future citizens. And that’s exactly what you want,” he said.

Baking youth development into the DNA of every precinct, Butts added, could also improve the NYPD itself in the long run.

“If every department said, ‘We would love for you to join our department and in addition to the routine patrol and everything else you know about, we want you to be available to work with our youth groups and help them with their mix tapes or play sports with them on the weekends.’ Maybe some officers will decide not to pursue law enforcement when they hear that and I think, terrific, like, let’s not have them in the club.”

Chief Harrison’s next scheduled listening sessions are in the South Bronx on May 27th and Flatbush on June 10th.

Throughout the pandemic, Mayor Bill de Blasio continually talked about how the first thing the city …

Read on for more theatre news you may have missed in today’s headlines. Keala Settle Live From…