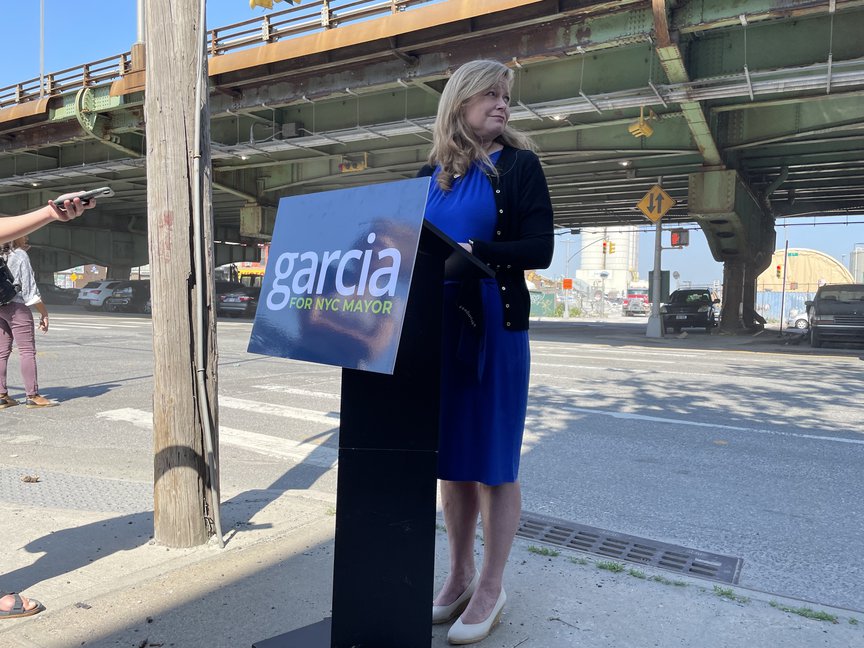 Ask Kathryn Garcia about the city’s “CP process” and a knowing grin will spread across the former sanitation commissioner’s face. She’s been known to drop this term during Zoom forums, presumably to show off her depth of government knowledge but also because she’s genuinely into it.

For most New Yorkers who do not know, CP stands for Certificate to Proceed, a component of the city’s complex capital budget process. Essentially, it’s the critical sign-off that’s required before any city agency can put a shovel in the ground for projects like housing, schools, sewers, or roadways.

Over the weekend in Union Square, Garcia briefly paused her campaigning to explain why she felt it was important for the mayor of America’s biggest city to know such bureaucratic intricacies.

A steady throng of greenmarket shoppers buzzed around Garcia, who wore a green dress and her trademark white tennis shoes. On the faces of the passersby, there were mostly vague gazes, which sometimes sharpened into recognition upon seeing the pamphlets with the header: “Endorsed by the New York Times.”

With less than a month to go before the June 22nd primary, the 51-year-old newcomer has surprised nearly everyone in the city’s political class by showing how far competency and a mastery of the nitty-gritty details of government can go in a contest often won by sweeping visions. Her bread-and-butter qualification is having delivered tangible services to New Yorkers. Prior to heading a more than 10,000-person agency overwhelmingly dominated by men, Garcia ran the operations of the Department of Environmental Protection under Mike Bloomberg. More recently, she worked as the city’s “food czar” in charge of distributing meals to needy residents amid the pandemic.

But reflecting the wide-open nature of the race as well as her candidacy, political strategists have over the last few weeks gone from describing her chances as zilch to slim to who knows.

In the latest shocker, a poll released late Tuesday showed Garcia leading the field for the first time, with 21 percent of 570 likely voters — that’s one percentage point ahead of both Eric Adams, the Brooklyn borough president, and five ahead of Andrew Yang, the former presidential candidate. Both men have consistently led previous polls, and are generally regarded as the frontrunners.

Pollsters have questioned the reliability of the limited polling of the mayoral race, which comes amid a new style of voting unfamiliar to many New Yorkers. But given how much politics is about perception, the poll is likely to raise her profile and credibility, as well as provide a much-needed fundraising boost.

Some say that Garcia’s surge is a result of the pandemic as well as eight years of Bill de Blasio, who has frequently been criticized as a poor manager. That taken together, the crisis and current mayor have forged a sense of pragmatism in voters, leaving them craving technocrats over untested visionaries.

“New Yorkers want someone who knows how to get things done,” said Mitchell Moss, a professor of urban policy and planning at NYU. “There’s a genuine need for someone who can oversee the reopening of the city.”

Garcia is a moderate candidate on many issues; she does not want to defund the police, and her plan for addressing segregation in schools includes removing some admission screens but not all.

In recent memory, there have been two people who have run for New York City mayor from the unglamorous perch of sanitation commissioner: Jerome Kretchmer, who ran in 1973 and once said he wouldn’t mind riding a garbage truck all the way to City Hall, and Paul Screvane, who ran in 1965.

Aside from lacking the benefit of precedence, Garcia has other more obvious challenges; she has no traditional base of support, no big union or business support, and not a lot of cash to get her message out to over 8 million New Yorkers. Her main labor supporter is the 6,700 member-union of sanitation workers.

John Mollenkopf, a professor of political science at the City University of New York Graduate Center who studies election trends, says that traditionally, the key to winning Democratic primaries in New York has been to fuse a coalition of Black and liberal white voters. At this point, most experts don’t believe Garcia has much reach beyond the latter.

Money is another obstacle. Her $3.5 million in fundraising, while respectable, pales in comparison to rivals. Adams and Scott Stringer have each raised more than $9 million. Yang has raised over $7 million.

As a candidate, Garcia sometimes lacks the emotionally charged speech-making skills of a candidate like Adams or the joyful energy of Yang.

Last week, she held a press conference on her transit plan, which would turn 25% of parking spots into pedestrian and cyclist lanes. Her detailed proposals on climate change have been praised as setting her apart from the field. On Monday, she was endorsed by the New York League of Conservation Voters, a statewide environmental advocacy group.

But standing at a podium below the BQE in Gowanus, Garcia emanated less charisma than when speaking to voters in the street, as she stiffly read off prepared remarks barely audible above the din of traffic.

Her aide commended her for being a good sport, but it was hard not to wonder whether a seasoned campaigner might have handled the conditions differently.

“First-time candidates generally do not win races,” said Hank Sheinkopf, a veteran political consultant. “Being a candidate is a learned activity. It takes time.”

Later, in response to the suggestion that she might prefer running government to being a politician, Garcia insisted that was not the case.

Garcia recently began sharing more details of her life growing up in Brooklyn, noting she was adopted and grew up in a biracial family of five, which included two Black siblings.

This weather has me feeling nostalgic for family road trips. Well maybe not that nostalgic… the VW van was always so dang hot and I’m remembering when my sister chucked my book (Gone with the Wind) out the window, making it literally “gone w/ the wind.” She is oh so very clever pic.twitter.com/9i17SkLprx

During this month’s first Democratic mayoral debate, she spoke about her commitment to racial justice by pointing out that her children are half Puerto Rican. Garcia is the surname of her ex-husband.

“This is personal to me,” she said.

One of the biggest unknowns of the race is the introduction of ranked-choice voting, in which primary voters are allowed to choose up to five candidates in order of preference.

If no candidate wins a majority of votes in the first round, the candidate in last place is eliminated and his or her votes will be redistributed to whatever candidates those voters ranked second.

The process is then repeated until there are only two candidates remaining.

Although it sounds complicated, experts have honed in on one important takeaway: being second-best matters. Candidates who do not have the most first choice votes can still be propelled to victory based on second choice votes.

In San Francisco, where ranked-choice voting has been in place since 2004, there were two instances in which candidates who placed third in the first round catapulted to victory after subsequent rounds.

The caveat is that these were small City Council-type races, in a city with less than a million residents.

New York City’s mayoral primary is expected to draw at least 700,000 Democratic voters, or less than a quarter of those registered. The Democratic ballot will have a total of 13 candidates for mayor. Whether voters fully utilize all or some of their options under ranked-choice voting is another uncertainty clouding the race.

“New York City is going to be a very unique case,” said Nick Murray, a policy analyst at the Maine Policy Institute who studies RCV.

Asked if a candidate like Garcia who might occupy third place during the first round could win in a large ranked-choice election, Murray replied, “Mathematically, it’s possible.”

Garcia’s odds are likely to be influenced by the upcoming June 2nd debate, which will be in person and comes at a critical moment following her most favorable poll. She was viewed as holding her own in the first debate, held on Zoom, but she failed to have a breakout performance that many said she needed after the Times endorsement.

According to Kathryn Wylde, the president of the Partnership for New York City who represents the city’s business community, Garcia will need to be “more assertive, but not aggressive, as they tell us women to say.”

Wylde, who does not endorse candidates, has openly admired Garcia, and she is among those who argue that gender could be a decisive factor in this year’s primary.

Read More: A Woman Mayor In NYC Is More Viable Than Ever, Even If There Is Not A “Women’s Vote”

One problem she faces is that pro-women voters will have two choices besides herself: Maya Wiley, the civil rights attorney and fellow de Blasio alum, and Dianne Morales, the former nonprofit executive (who is currently facing internal issues with her campaign).

At the same time, ranked-choice voting means she may very well notch second choice votes from her female rivals’ supporters.

During her visit to Union Square, an older bespectacled man walked up to Garcia and pronounced, “We need a woman to straighten out the city.”

A campaign volunteer loudly repeated the message for the crowds. “Did you hear that?” he cried.

Afterward, the man, Steve Goldstein, explained that he felt that men simply had “too many problems,” referring to the sexual harassment allegations that have surfaced against Governor Andrew Cuomo and Scott Stringer, another candidate in the race. (Both have denied any wrongdoing.)

But there was another reason why he was voting for her.

“She’ll get something done,” he said. “Let’s give her a chance.”

Bandits Lands In The West Village Like Some Crazy '70s Dream

Read on for some recent theatre headlines you may have missed in today’s news. Woolly Mammoth …