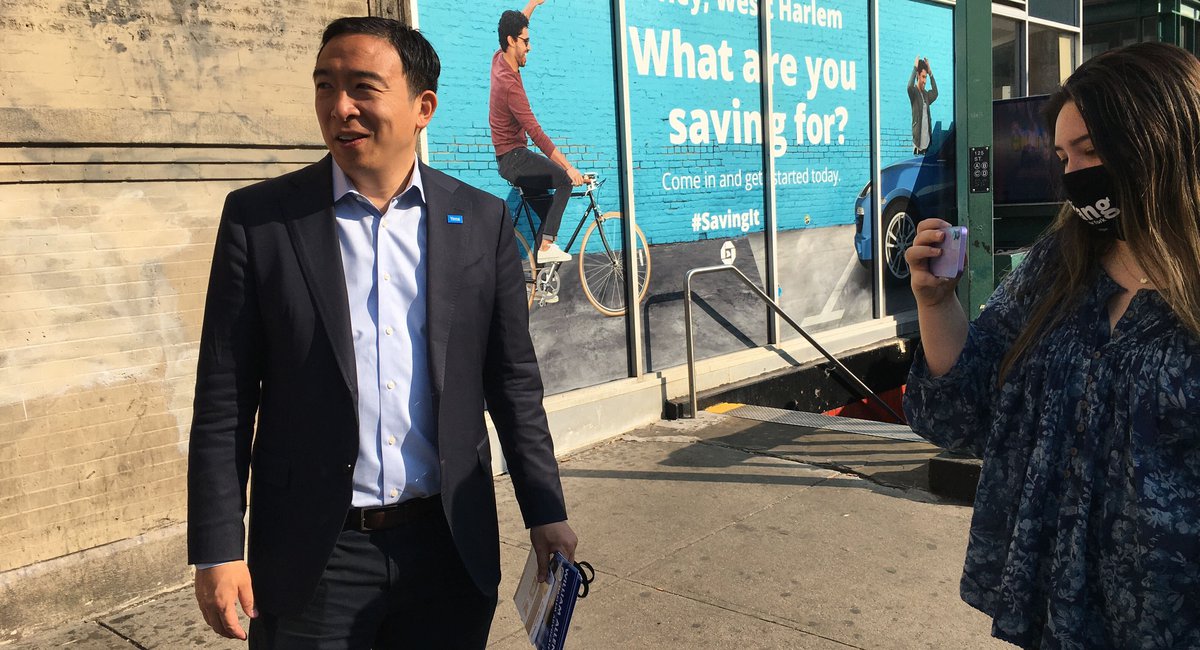 When Andrew Yang jumped into the Democratic race for New York City mayor he became an immediate frontrunner, buoyed by name recognition from his presidential bid and his more than one million followers on social media. Now, with less than a month before the primary, New Yorkers — and not just journalists — are asking tough questions, checking if this celebrity candidate has what it takes to lead the city.

On the corner of St. Nicholas Avenue and 125th Street in Harlem last Thursday, Yang greeted voters, dressed in his dark blue suit with light blue open-collar shirt. In the warmer weather, he has ditched the signature scarf, and that’s not all that’s changing.

The former presidential candidate who built a following based on his plan to give all adult Americans one thousand dollars a month of universal basic income has proposed something dramatically different for the city. But those nitty-gritty policy details usually don’t come up in passing exchanges on the stump. Voters generally ask questions that push Yang to get more granular as they decide how to rank their vote.

“Go clean up the 28th. They have at least a hundred cars parked there,” said Cheryl Malter, a yoga instructor who lives nearby, raising the perennial issue of parking placard abuse, a problem Mayor Bill de Blasio and his predecessors failed to fix. She said there was a glut of parked cars outside the local police precinct.

“The parking placard abuse is egregious and I’ve already pledged to reduce the number of placards and to clean it up,” Yang said, promising to create e-placards that can be scanned and easily detected when they are being abused, assuming officers enforce this.

Malter sticks around to get her picture with Yang, because she said she’s never been photographed with a presidential candidate before, but she’s not swayed to vote for him. The job of mayor, one that she doesn’t understand why anyone would want, should go to someone who has devoted their life to the city.

“It’s just intuitively, as a New Yorker, I want a New Yorker to run it,” she said, whispering, “and I don’t know if he’s a New Yorker.” (Yang was born in New York and moved to New York City 25 years ago.)

It’s a criticism that’s come up before, over his definition of a bodega and how he and his family went upstate during the pandemic last summer. But as Yang strutted across 125th Street, past the Apollo Theatre and the street vendors setting up for the day, voters were drawn to his celebrity status.

“Mr. Yang. Hello, how are you?” shouted an animated Carl Brown, who struck up the conversation as he saw Yang and his team approach. “I don’t know who to vote for, you or my homeboy Adams,” he added.

Yang gave a pitch for ranked-choice voting, which allows voters to choose up to five candidates in order of preference, adding he’d prefer to be his number one, but he’ll take his number two. Brown said rising crime was the top issue for him at the ballot box this year.

“I’m 59 years old,” Brown told Yang, “back in the day they be selling their drugs, but it wasn’t that much, like shooting. This young generation right now, they out of control.”

Yang listened, posed for a photo, pledged to address the issue, “Nothing is going to work if we don’t get people feeling like they’re able to walk outside,” he told Brown. And that was all it took for Brown to say he was persuaded, and would vote for Yang. “Thank you, man, that means a lot to me,” Yang told him. “And by the way, I would never have guessed you are 59.”

Yang’s plan to address crime and reform policing was supposed to be the centerpiece of the day. But at a stop later that morning in Brooklyn, joined by City Council candidate Edwin Raymond, a former police officer, his announcement was interrupted by a heckler holding a Maya Wiley sign. Miles Earl, shouted throughout Yang’s press conference, focused on his voting record: Yang has never voted in a local election and missed a couple presidential elections, too.

The incident left Yang apparently flustered and his policy announcement, about creating a warning system to track repeat low-level offenders, was tough to parse. When a reporter asked about police disciplinary records, an issue that has been covered extensively since last summer, he seemed confused.

It was not the best day on the stump but Yang put on a brave face, saying it’s expected that New Yorkers will speak their minds, and he wouldn’t have it any other way.

“Running for mayor has been a blast because you do hear so much and learn so much from people,” he said.

“Is there room for Andrew to grow? Absolutely. Is there room for him to be a better, more effective executive person? Hundred percent,” Assemblymember Ron Kim told Gothamist / WNYC on Sunday. Kim, who endorsed Yang back in January, said what some may see as Yang’s inexperience could also be interpreted as flexibility, a willingness to try new approaches to help the city recover from the pandemic.

A few days later, Yang picked up a major endorsement from State Senator John Liu, the first Asian American to win citywide office when he became comptroller in 2010. He also ran for mayor in 2013.

Asked whether Yang knew enough about City Hall to do the job, Liu downplayed the concerns.

NYC Is Planning A ‘Full Reopening’ For Public Schools This Fall. Here’s What That Means For Nearly One Million Students

Read on for some more theatre news you may have missed in today’s headlines. Lincoln Center Ac…