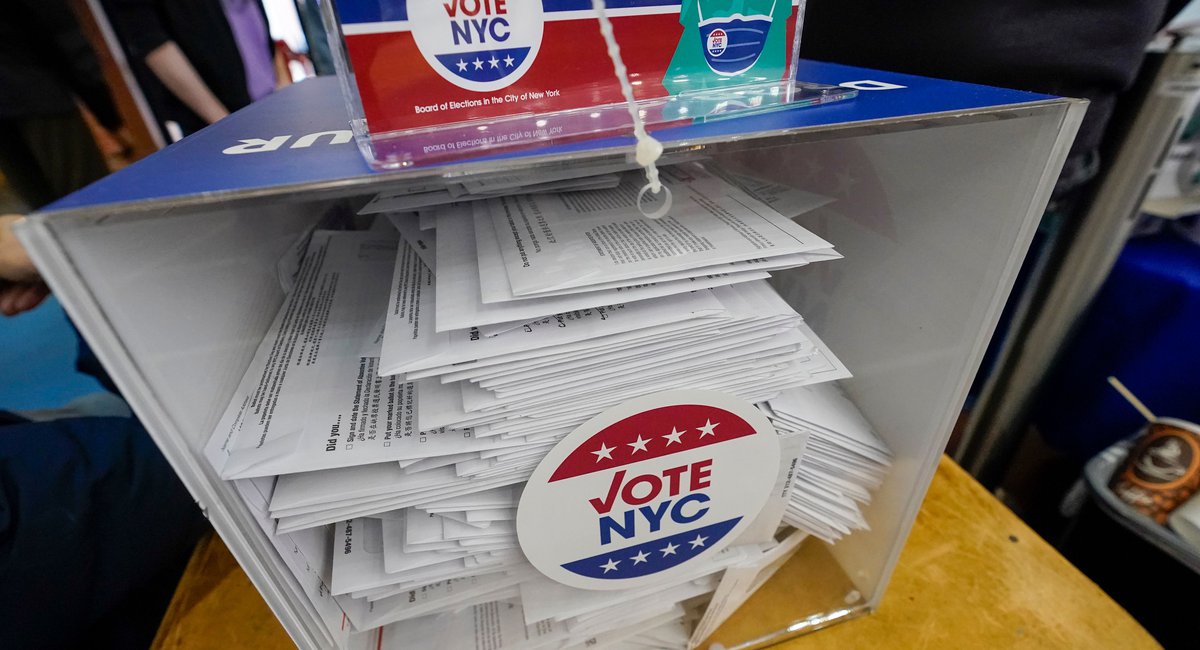 When Democratic mayoral candidate Andrew Yang hit the stump last week talking about support for democracy reforms, including allowing non-citizen permanent residents and 16- and 17-year-olds to vote in municipal elections, he also used the moment to take a swipe at the New York City Board of Elections.

He said the agency was “under-resourced” and needed better funding not only to ensure people were not stuck in long lines to vote but also to deliver results quickly after the polls closed.

“I can speak for a lot of New Yorkers when I say, we really want you to be able to count those votes quickly,” Yang said with a chuckle at an event in Lower Manhattan last week. “No one wants to have an Iowa situation or something,” he added, referring to a three-week delay in certifying the Democratic presidential caucus results there last year.

His eagerness underscored a major issue facing city election officials ahead of the closely watched June 22nd primary: how to produce fair and accurate results quickly while proving they can withstand pressure from campaigns, and earn the confidence of New Yorkers that the election results are legally sound and accurate.

As it stands, with new state laws and ranked-choice voting to contend with, the city BOE said on Friday election results won’t be available before the week of July 12th, almost three weeks after Primary Day.

Testifying at a City Council budget hearing, city BOE Deputy Executive Director Dawn Sandow said the board would release the unofficial election night returns on Primary Night, as it always does, but because of state requirements, there would be two additional weeks, first to allow for absentee ballots to arrive and then for voters to correct minor errors, before the board could run additional tallies of the votes.

“Once all the data is received, the software will make the rounds very quickly,” Sandow told the Council, referring to the RCV Universal Tabulator that the city BOE expects to use to count subsequent rounds of votes.
The unofficial election night returns will be based on the election-machine results from early voting and Primary Day. After that, the software tabulator will tally votes. State election officials completed testing the software earlier this month; the state BOE will vote on certifying its use on Tuesday.

READ MORE: How The State Agreed To Complete The RCV Software Testing

The main driver for the results timeline is the recently amended state election law. The city BOE must accept absentee ballots, postmarked no later than Primary Day, up to a week after the election. In this case, that means June 29th. If an absentee ballot is returned with what’s called a “curable defect” like a missing signature on the oath envelope, then election workers are required to notify the voter by phone, email, and letter and allow them to fix the problem.

The legislation creating the cure process was passed last year after more than 80,000 thousand voters had their primary absentee ballots rejected for errors like a missing signature that under the new law would be fixable. The voter then has seven business days to respond to the BOE. That means cures could come in up through July 9th (which includes an extra day in the cycle to account for the federal Independence Day celebration on July 5th).

At their weekly meeting this Tuesday, the city BOE commissioners are expected to decide whether they should release any preliminary data beyond the unofficial election night returns, which media outlets, campaigns and others could use along with the RCV software to see a preliminary snapshot of the results at that point in time.

No one from the city BOE responded to a request for comment about what options they were considering.

State BOE Democratic Co-Chair Doug Kellner said he was urging the city BOE to release the cast vote record (which shows how people ranked all their choices) as soon as the Friday after the election. He said the city was expected to consider releasing that data a week after the election.

“What’s giving them pause is that they feel that everyone is always criticizing them and that preliminary information will not be fully understood or properly understood as ‘preliminary and unofficial’, and that that will lead to greater criticism in the end,” Kellner told Gothamist / WNYC. “I think just the opposite is the case,” he said, arguing that more transparency would help the process.

In a worst-case scenario, a candidate could try to declare victory while enough votes to change the results were still being counted. In the best-case scenario, releasing additional preliminary information might dissuade a campaign from objecting to any votes if they see they can’t win.

Voting rights advocates say the most important thing is that the city counts all the eligible votes fairly and accurately.

“Ensuring that every vote is counted and counted accurately is much more important than counting votes fast,” said Perry Grossman, senior staff attorney in the Voting Rights Project at the New York Civil Liberties Union. “The City Board of Elections’ timeline includes the new notice and cure process that safeguards constitutional rights by affording voters an opportunity to save ballots might otherwise be discarded for trivial reasons.”

Susan Lerner, head of Common Cause New York and a strong proponent of ranked-choice voting, said the real cause for concern when it comes to delayed primary results should not be directed at election officials but instead at candidates and attorneys who object to absentee ballots in neighborhoods where they believe the results may be less favorable to them, a common practice which could delay a final result even more.

“If the candidates want a faster result, then they shouldn’t file frivolous objections to absentee ballots,” Lerner said.

Gothamist / WNYC reached out to all eight of the leading mayoral candidates to ask if they would pressure the city to release preliminary results more quickly and if they planned to object to any absentee ballots.

Here’s what the candidates said:

Shaun Donovan: “We must allow the BOE to do their job efficiently and accurately to ensure that every vote is counted,” campaign spokesperson Yurida Pena emailed Gothamist / WNYC, adding that the Donovan campaign would not ask the city BOE to release preliminary cast vote records. She did not say explicitly whether the campaign would challenge absentee ballots. She did say, “Ranked-choice voting is a powerful democratic tool to ensure that elections are fair and that voters have greater say in choosing their representative. And it is only fair to count every vote which includes absentee ballots.”

Dianne Morales: “As this is the first time NYC is calculating RCV results for a citywide election we want to make sure the Board of Elections tallies the results accurately and without interference. Our campaign won’t be part of delaying democracy, so we don’t plan on challenging absentee ballots or demanding the premature release of any numbers that could confuse New Yorkers,” said Lauren Liles, Morales campaign spokesperson.

Andrew Yang: “When it comes to the question of election administration, my position is crystal clear: I will always be on the side of promoting the integrity of the elections and making voting as easy as possible for New Yorkers. Full stop. Like so many other City agencies, the Board of Elections has been run by entrenched insiders for years and is broken because of it,” Yang said in a statement. His campaign would not comment on whether they would challenge absentee ballots. They also pointed to this tweet.

I love ranked choice voting and will respect the outcome on June 22nd. All candidates should make the same commitment for the good of the city and democracy. https://t.co/fTCZe2kQdz

Playbill's Weekly Streaming Guide: What to Watch May 24-28

Listen to 'Rise and Shine' From Camp Morning Wood: A Very Naked Musical

Read on for more theatre news you may have missed in today’s headlines. The Good Fight Returns…

When the COVID-19 pandemic hit New York City, like most members of the theatre industry, Greg Dasson…

A challenge for those easily tempted by greed, lust, jealousy, and more is coming to NYC’s Meatpacki…