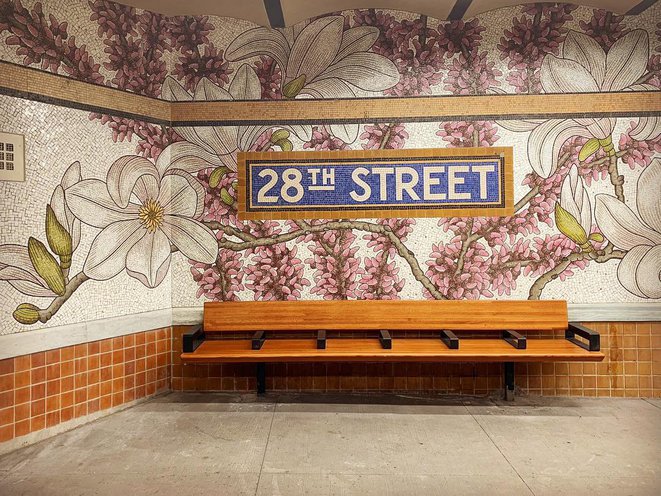 Former presidential candidate Andrew Yang has played the role of the goodnatured, slightly clueless frontrunner ever since he entered the NYC mayoral race. Despite gaffes and goofs galore, he has now embraced a new “post-embarrassment” phase. And he seemed to kick things off by going on the comedian Ziwe’s self-titled Showtime show on Sunday evening to uncomfortably answer a few questions about his favorite billionaires, rap songs, and racial stereotypes.

But there was one little thing that really stuck out for New Yorkers: when asked what his favorite subway station is, Yang said it was his local stop…Times Square. “It’s big, it’s cavernous, there are entertainers there, sure, like, what’s not to like?” he said by way of explanation.

Some were incredulous: “This is like saying your favorite Italian restaurant is Olive Garden,” tweeted Jessica Valenti. Some called Yang’s pick “disqualifying,” such as Miranda Yaver, PhD. Others said those reactions were extreme and elitist.

“You can have legit issues with Andrew Yang as mayor and also not lean into gross tropes about authenticity of belonging,” tweeted Jeff Yang in response to someone who declared that Andrew Yang was “one thousand percent Not a New Yorker” because of his love of Times Square.

Read More: The Midtownaissance Is Coming And No One Believes Me

Notions of authenticity amidst this mayoral race aside, the thing that most interests me about this topic is how New Yorkers define what qualifies as a good or bad subway station. Because there are huge differences in the maintenance, amenities, and vibe of every stop. The subway, more than any other part of the city, is one thing that the most number of New Yorkers have in common, and we all have passionate, incredibly specific ideas about what makes one station stand out from another.

Is it about the ease with which you can traverse the station, and whether it’s ADA-accessible? Is it about the amount of options for taking different lines? Is it about the cleanliness or lack thereof? Is it the art on the walls, the stained glass mosaics, and the shine of the tiles? Is it because there’s something unique about the station that only regulars would know? Is it about whether it has entertainment or food available, or perhaps fresh fruit and concessions? Or is it all about convenience—do you inevitably develop Stockholm syndrome for whatever station you use the most?

Maybe it ultimately come down to nostalgia and sentimentality—maybe it’s just the fact that our memories commingle with the changing landscape of the city, and from that our urban identities are formed. Traversing the city then becomes a mini-tour through your own personal history. Maybe the York Street station was where you kissed your first love; maybe the Jackson Heights–Roosevelt Avenue/74th Street station is where you broke down crying after breaking up with them; maybe Dyckman Street station is where you ran into that person again after five years and saw them drop a bagel on the ground, pick it up, and eat it—don’t deny it, I just saw you do it!—so you counted your blessings you already broke up.

To try to get to the heart of all this, I posed the question of favorite subway stations to my colleagues, some of whom decided to also let me know what their least favorite station is, because New Yorkers are nothing if not discerning.

“The Franklin Street subway stop (serving us since 1918) is the most beautiful and subtly whimsical subway station in NYC,” says Jen Carlson. “From the terrazzo floors to the art displays embedded in the walls to the rose-tinted hues… it deserves your R-E-S-P-E-C-T.” In fact, following Aretha Franklin’s death, the MTA put up some official tributes to the legend in this station.

Meanwhile, the 28th Street Station (Lexington Avenue line) is another beaut — this one “underwent some renovations in 2018 and came out of it a straight up stunner!” This is largely thanks to Nancy Blum’s “Roaming Underfoot,” a set of subway mosaics meant to “capture some of the magic” of the nearby Madison Square Park, an urban sanctuary that features flowers like Red Buds, Magnolias, Hellebores, Witch Hazel, Daffodils, Hydrangea, and Camellia, which were “chosen as representation of plant species that withstand changing climate conditions of the city.

Carlson also says she loves “the multi-tiered chaos (and churro vendors) of Broadway Junction. The design feels a bit like what would happen if a child was told to create an Escher-esque subway station — like they just kept stacking more pieces on top of it?”

James Ramsay had an unexpected pick for his favorite station: “68 St / Lexington Ave, that’s deep as hell, that’s probably my favorite station,” he said. That station happens to have one of the steepest escalators in the city. “For some reason I like the ordeal of all those escalators. I also have sentimental feelings about the Upper East Side because I was born there and then my family immediately bailed, so there’s life-that-coulda-been energy to that stop.”

As for his least favorite stations, he points out “the Bedford L and Union Square L stations because everyone is very attractive, which I find distracting and unnerving. I can accept one hottie per station.”

For Jen Chung, the combination of views, art and ease of transfers are what add up to a truly great subway station. She fully agreed with Yang’s choice of Times Square, both because she lives off the 1/2/3 and because of how many transfers are available there. For functionality, she says it can’t be beat. “For form, I like Astor Place uptown entrance, then any subway with great art, like this one at 167th Street in the Bronx with the amazing Rico Gaston murals.”

As for worst station, she had two picks: Penn Station (for the express and local trains being on separate platforms), and the hellscape that is the transfer between the F and the 1/2/3 at 14th Street, better known to regular users as the “tunnel of death.”

THE LOST STATION OF 19TH STREET

For Jake Dobkin, the ability to explore the most mysterious corners of the city are the most interesting: his favorite is the “lost station at 19th Street on the 6, because you know I only hang with ghost stations.” Of course, the most legendary ghost station is the old City Hall stop.

For stations currently in use, he favors the Smith–Ninth Streets for the view. And he also loves the underground platform at the Bergen Street station that they used in the 1990 film Jacob’s Ladder.

Caroline Lewis had two picks — Fulton Street and Union Square. The former “because it’s shiny and new without being too obnoxious, it’s functional, and most importantly, it provides the essential nexus between the A/C and 4/5 that allows me to get from Bed-Stuy to my parents on the Upper East Side.”

Meanwhile, you can’t be the entertainment at Union Square, making it an standout — “I appreciate the chaos/top notch buskers at Union Square,” she said. “It’s annoying to navigate, but good buskers and people watching.”

Sydney Pereira also chose Union Square as her favorite. “Like Caroline said, all the buskers, music, artists make me feel… alive! And very much in and a part of New York City,” she explained. “Plus, it’s practical in that a lot of trains stop there. It’s overwhelming, confusing sometimes, overstimulating mentally, but is just the New Yorkiest of stations.” She also is a fan of any station which has trains that can take her to the beach.

For Sophia Chang, the number one thing is functionality and usability. “Dekalb Avenue, because it offers all pedestrians an alternative to crossing Flatbush on foot, and it’s sensibly laid out. Zero charm though,” she noted. She also appreciates all of the aboveground stations on the Q line in Brooklyn, and thinks the best buskers are working at the Metropolitan stop on the G line.

Nsikan Akpan picked his old stomping grounds: the 96th Street station on the Lexington Avenue line. “I used to live by there,” he said. “The whole thing feels very gritty (despite its location), and I like the design (namely the arches). The entrances open up to a pretty eclectic mix—playgrounds, a gyro shop, a Starbucks, a candy store/newspaper stand, an eyebrow place. Overall, it feels pretty New York-y. I think they filmed Léon: The Professional near there.” He is correct about that: Léon and Mathilda’s apartment building in the film was located on the corner of E 97th Street & Park Avenue.

Finally, Liz Kim was unequivocal about her top pick: “Hudson Yards!!!” She pointed to the video below of ballerinas performing Justin Peck’s “THE TIMES ARE RACING” there in 2017. “It always had the novelty of being so bright and spanking new,” she said. “But after I saw that video, I dream of running up the stairs and doing fan kicks across the station.”

MAYBE ALL SUBWAY STATIONS ARE THE BEST?

Check out a few more tweets from people discussing their favorite and least favorite stations below, then chime in with your picks in the comments.

Subway station discourse: One of my faves is the 190th st station bc I love the Bennett Ave entrance so cute and hobbit-like pic.twitter.com/mrI6GiD5GK

Like with movies, it’s easier to say a list of rather than a singular ‘best’ subway station. On that note: Jackson Heights-Roosevelt Av (for the stalls!) and the Museum of Natural History (for the tiles!) are top, top contenders.

Best NYC subway station is West 4th Street where both I (as a drunk teenager) and my son (as a three year old out past his bedtime) have passed out on the platform.

ok but my real list:
-vernon-jackson g: less than 3 people get off/on every time
-essex/delancey: too much up/downstairs
-carroll st: just let us transfer without going a mile, buds
-bowery j: vibes are just off
-times square: vibes off in the opposite way

The best subway station is East Broadway because you pop out at a park and library and because I have no associations with it aside from hanging out on a weekend having a breakfast sandwich. Not near an office or a traumatic work situation, so, ideal. Hope this helps pic.twitter.com/kOL4c2aV9n

If today is about Good Subway Station Discourse, please familiarize yourself with the East 180th Street subway station, which is truly a gem pic.twitter.com/TneOVSga87

NYC Is Planning A ‘Full Reopening’ For Public Schools This Fall. Here’s What That Means For Nearly One Million Students

1894 Birthday of Robert Russell Bennett, orchestrator of Broadway classics including the original Su…