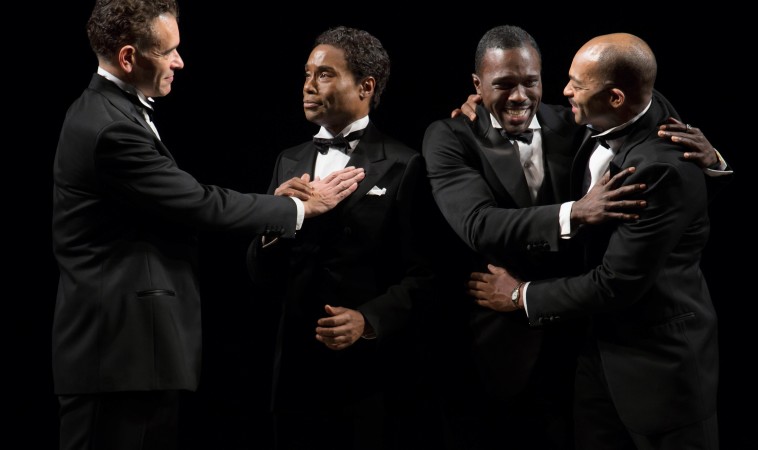 Following a tour through New Jersey and Pennsylvania, Shuffle Along made its groundbreaking Broadway premiere May 23, 1921. Making a home in a multipurpose performance space, the musical played a record 504 performances at the 63rd Street Musical Hall. Shuffle Along helped to usher in the Harlem Renaissance, showcasing the excellence in Black culture through Black art. Additionally, the production marked the first time the orchestra of an audience was integrated on Broadway.

Featuring music by Eubie Blake, lyrics by Noble Sissle, and a book by Aubrey Lyles and Flournoy Miller, the show tells the story of two corrupt men running for the mayor of Jimtown, though the plot was a loose device to showcase the singing and dancing from the cast. Though it featured Black performers in blackface, a racist but common tradition that provided an avenue for Blacks to perform onstage in the 19th and early 20th century, the musical marked the first time Broadway featured a production entirely written, directed, produced, and starring Black artists—notably providing a launching pad for Josephine Baker, Florence Mills, Paul Robeson, and more.

Look Back at the Original Broadway production of Shuffle Along

Shuffle Along returned to Broadway in 1933, 1952, and most recently, in 2016 with a George C. Wolfe-helmed revisal. Featuring a retooled book by Wolfe, the adaptation presented material from the original 1921 musical while detailing the events that catalyzed the songwriting team. Shuffle Along, Or The Making of the Musical Sensation of 1921 and All That Followed played 38 previews and 100 performances before closing July 24, 2016, earning 10 Tony Award nominations including Best Musical.

A Look at Audra McDonald, Billy Porter, and More in Shuffle Along on Broadway