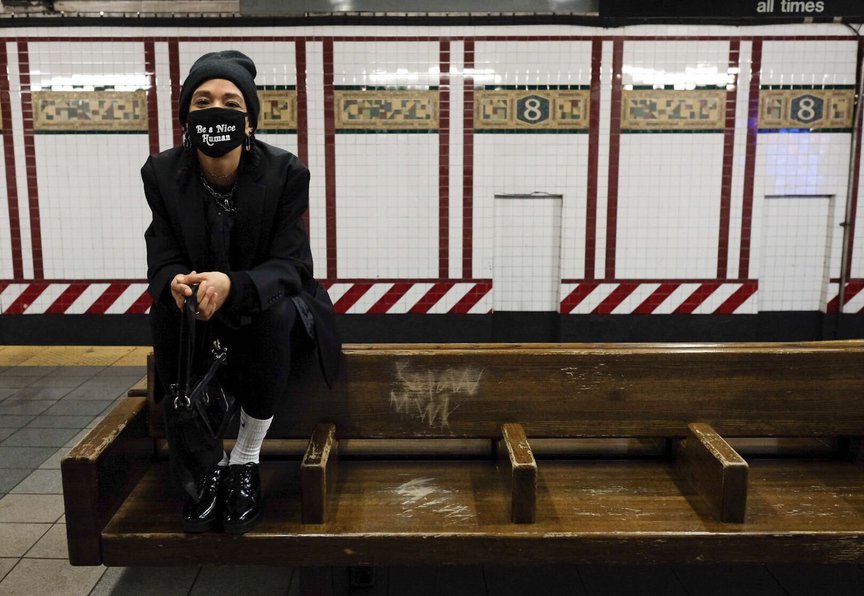 Monday morning marked the first time in over a year that the MTA allowed riders to swipe into the subway past 2 a.m. There was no fanfare, or ribbon cutting, just hot platforms and relatively infrequent train service greeted customers.

But that was enough.

“It feels good to be able to ride the subway again,” Bushwick resident Vanessa Redmond, 36, said as she waited for an L train at 14th Street around 3 a.m. on a nearly empty platform. “I almost took a cab tonight, but I took my chances, I didn’t know actually  if it’d be running tonight or tomorrow night, and I’m glad I did.”

The night wasn’t without hiccups.

Shortly after 2 a.m. at the subway entrance on 43rd Street and 7th Avenue in Times Square, the turnstiles automatically locked. Both the NYPD officers stationed at the entrance and the toll booth attendant told customers, erroneously, that the subways were still closed to passengers.

The MTA dispatched maintenance teams to fix the locked turnstiles, after a Tweet from Gothamist.

OK, a major WTF, turnstiles are locked, NYPD say no access, toll booth agent has no idea. MTA said Monday 2 am 24 hour service is back. What’s the deal @MTA pic.twitter.com/dn1KoUUG3Z

Hi Steve, we were made aware that our vendor executed a system reboot that caused a temporary shut down of the turnstiles. The issue was fixed quickly, and we hope the station agent was able to let you in through the gates in the meantime. ^ML

David Siffert, 37, found a different entrance at Times Square to enter the subway. He lives in the East Village and had just arrived by bus from Washington D.C.

“I was really not looking forward to walking a couple miles home,” he said, standing on the platform. “So when I checked my phone and saw it was the first day of 24 hour service, I was quite happy about that.”

While trains have been running 24 hours throughout the pandemic, the MTA initially barred passengers from riding from 1 a.m. to 5 a.m. so cleaners could disinfect train cars and subway stations. The agency revised the closure hours to 2 a.m. to 4 a.m. in February.

The MTA continued disinfecting long after the CDC determined COVID is not primarily spread through infected surfaces.

The MTA has budgeted more than $300 million for cleaning this year, and said it will continue to clean trains and stations.

“We’re at a critical moment in NYC’s recovery and at the MTA we’ve got a singular focus, and that is bringing riders back to mass transit,” MTA Chairman Pat Foye said Sunday.

Foye cited a recent MTA customer survey which found 72% of riders found the subways were cleaner than before the pandemic.

The same survey found 87% of riders were also worried about their safety on the trains.

Gothamist spoke with several women early Monday morning who said they were not afraid to ride the trains alone.

“I like that I have a whole car to myself and there’s people out and about, and there were cops out on the platform, it felt safe,” Brooklyn Michalowicz, 25, who was on the train early Monday morning heading home to the West Village after visiting with friends on the Upper West Side. “It’s nice having a way to get home that’s secure and if I just keep my eyes down and my head up, I’m good.”

While the MTA said it would be enforcing its recently enacted rules against people sleeping in subway stations and in cars, Gothamist witnessed dozens of people Monday morning doing just that.

Subway ridership is now hovering around 2 million riders a day, still a far cry from the more than 5 million daily riders before the pandemic. But, as more New Yorkers get vaccinated and businesses reopen,  the MTA hopes the return of 24-hour subway service, and cleaner subways will bring back more riders to drive those numbers up.

Tony winner Hugh Jackman and Oscar winner Laura Dern will star in a movie adaptation of The Son, the…