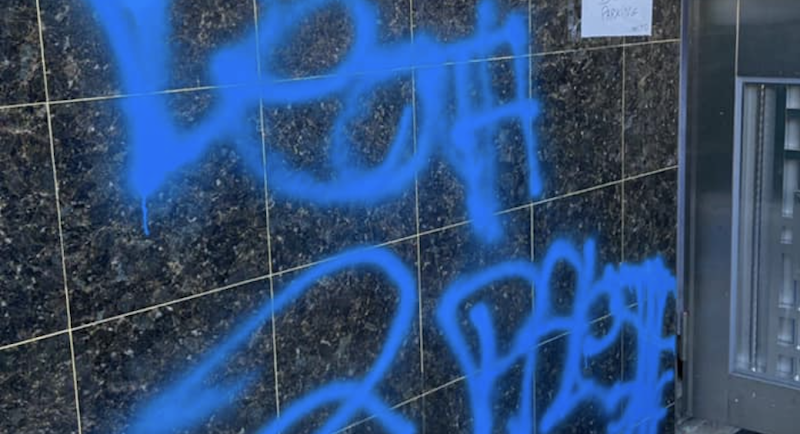 Parishioners at St. Athanasius Catholic Church on Bay Parkway discovered Friday that an enormous crucifix was torn down from the church grounds and an American flag on the rectory was burned, police said.

“We are deeply saddened to inform you that the Cross on our Church property was vandalized last night,” the church posted on its Facebook page. “This exhibition of violence and religious hatred is very disturbing. This is definitely an offensive act not only to our Parish but to the Catholic Church! We ask our political leaders to act on the issue of religious hate crime ASAP! This is unacceptable!”

No arrests have been made as of Saturday.

Shameful. Msgr Cassato called it the saddest day in his 20 years at the parish. Just this week we passed a bill to increase criminal penalties for defacing houses of worship. This will not be tolerated. We’re working with the @NYPD62Pct to identify those responsible. @KalmanYeger https://t.co/cKoeIqtyx7

On Thursday morning, members of the Tayba Islamic Center on Coney Island Avenue in Midwood discovered anti-Palestinian graffiti on their building as they gathered to celebrate Eid al-Fitr and the end of Ramadan.

“Death to Palestine” was sprayed in blue paint on the mosque’s wall, NYPD said. No arrests have been made.

The mosque is largely Pakistani, not Palestinian, worshippers pointed out to WABC-7.

“I’m surprised when I saw this on the wall,” Imam Mohammad Younas said in an interview with WABC-7. “And, hopefully, the NYPD get the person, whoever did this.”

The graffiti drew condemnation from the New York chapter of Council on American-Islamic Relations, an advocacy group for Muslim civil rights. In a statement, Ahmed Mohamed, CAIR-NY’s legal director, said authorities from all levels of government should investigate the vandalism.

“The Muslim community is facing attacks around the world, and the lack of effective responses to atrocities committed abroad seem to have emboldened those here to act on their hatred for Muslims and Palestinians. “Given the events in Palestine and the Eid holiday, law enforcement must investigate this vandalism as a hate crime and swiftly apprehend the suspect. Muslims deserve to worship in peace whether in Al-Aqsa mosque in Jerusalem, throughout Palestine or in Tayba Islamic Center, Brooklyn.”

This is the second disgusting act of hate on a local house of worship this week; just a few days ago, a local mosque was desecrated with graffiti. Synagogues, churches, mosques being attacked tears at the heart of our community. pic.twitter.com/dTw07y4AFb

“I am appalled to learn of the hateful graffiti scrawled on the wall of Tayba Islamic Center in Brooklyn yesterday as Muslims here in New York and across the world celebrated Eid al-Fitr,” Cuomo said. “The Muslim community has long been part of the patchwork of our New York family, and we stand united with our Muslim brothers and sisters in the face of hate. I directed the New York State Police Hate Crimes Task Force to offer their assistance in the investigation of this racist vandalism and I look forward to seeing the people responsible for this crime brought to justice.”

[Update] Cuomo also condemned the vandalism at St. Athanasius Church in a statement Saturday: “I am disgusted to learn that St. Athanasius Church, a historically Italian American place of worship in Brooklyn, has been vandalized. These acts of hate should offend and outrage every New Yorker, and I want the Bensonhurst community to know we will do everything we can to bring the cowardly vandals responsible for this to justice. Hate has no place in our state, and as New Yorkers we celebrate our diversity.”