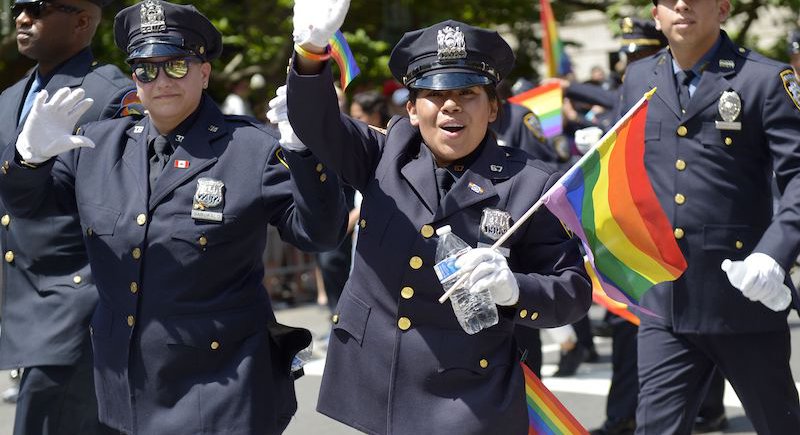 The nonprofit group behind the country’s largest LGBTQ celebration has banned groups of uniformed law enforcement personnel, including NYPD’s Gay Officers Action League, from marching in its signature parades through 2025, and the group will hire private security in place of using the police for crowd control measures.

“Effective immediately, NYC Pride will ban corrections and law enforcement exhibitors at NYC Pride events until 2025,” the organization said in a statement Saturday. “At that time their participation will be reviewed by the Community Relations and Diversity, Accessibility, and Inclusion committees, as well as the Executive Board. In the meantime, NYC Pride will transition to providing increased community-based security and first responders, while simultaneously taking steps to reduce NYPD presence at events.” Any police presence will be kept a block away from the Pride activities, organizers said. Individual officers who show up in uniform will be allowed to march, said NYC Pride co-chair André Thomas.

The Pride parade, which drew an estimated four million participants and spectators in 2019, was moved online last summer because of the pandemic and is to be held virtually again this year on June 27th, with some smaller in-person events planned.

Some advocates have pressed for these changes for years, but their calls took on greater urgency during the national reckoning over police brutality — especially for the marginalized groups that NYC Pride champions — after George Floyd’s murder by Minneapolis police, the organization said. The Pride movement itself was partly born out of the response to NYPD raiding the Stonewall Inn in the West Village to arrest gay patrons on June 27th, 1969.

In 2019, in the midst of commemorations marking the 50th anniversary of the Stonewall riots, then-NYPD commissioner James O’Neill issued an apology: “The actions taken by the NYPD were wrong, plain and simple,” and added, “the actions and the laws were discriminatory and oppressive, and for that, I apologize.”

“NYC Pride seeks to create safer spaces for the LGBTQIA+ and BIPOC communities at a time when violence against marginalized groups, specifically BIPOC and trans communities, has continued to escalate,” the organization said. “The sense of safety that law enforcement is meant to provide can instead be threatening, and at times dangerous, to those in our community who are most often targeted with excessive force and/or without reason. NYC Pride is unwilling to contribute in any way to creating an atmosphere of fear or harm for members of the community.”

A spokesperson for the NYPD called the new policy “disheartening.”

“Our annual work to ensure a safe, enjoyable Pride season has been increasingly embraced by its participants. The idea of officers being excluded is disheartening and runs counter to our shared values of inclusion and tolerance. That said, we’ll still be there to ensure traffic safety and good order during this huge, complex event,” said Detective Sophia Mason in a statement.

The Gay Officers Action League (GOAL) said NYC Pride’s decision was an insult to the work the group has done over decades to improve NYPD’s policies.

“For nearly 30 years, GOAL has provided LGBTQIA+ training for every new NYPD recruit at the academy, educating future officers on the unique challenges facing our community,” the group said in a statement posted on their website Friday, and added, “Our efforts have served as a model for police departments pursuing their own LGBTQIA+ programs. There are many partners for change throughout law enforcement. For them to succeed, they need to be supported by leading LGBTQIA+ groups, not excommunicated by them.”

“(NYC Pride) is well aware that the city would not allow a large scale event to occur without police presence. So their response to activist pressure is to take the low road by preventing their fellow community members from celebrating their identities and honoring the shared legacy of the Stonewall Riots,” GOAL President Brian Downey said in the statement.

GOAL filed a federal discrimination lawsuit in 1996 against NYPD in part because the police department did not allow their group usage of the police band in the Pride parade.

More Than Half Of New York's Adults Have Been Fully Vaccinated, Cuomo Says

Supporters Of Palestine Rally In Brooklyn As Israel-Hamas Conflict Rages