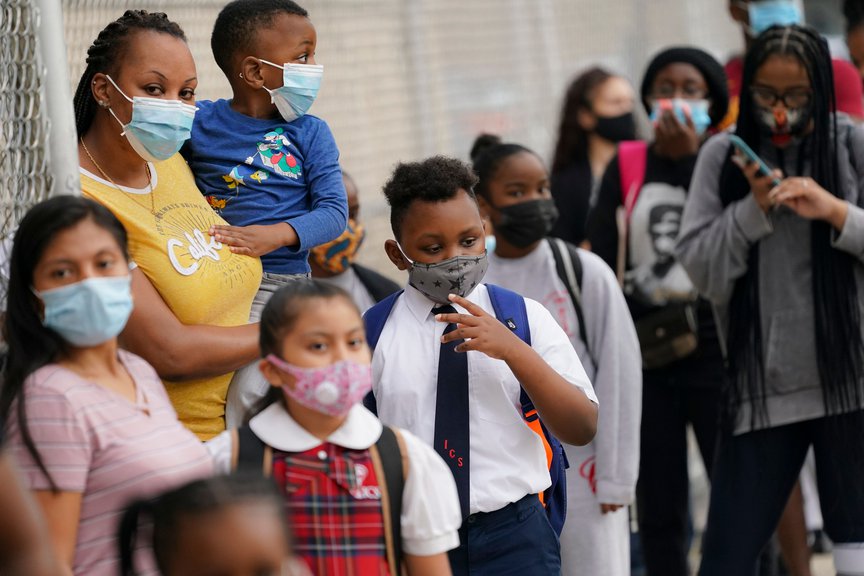 Governor Cuomo announced Monday that New York’s public universities would require students to be vaccinated against COVID-19 before they return to school this autumn. The move arrived hours before the U.S. Food and Drug Administration authorized the Pfizer-BioNTech vaccine for 12-to-15-year-olds. Younger kids will likely need to wait until September.

With shots for younger children on the horizon, parents and educators have been asking if vaccines against COVID-19 will be required at all schools—including ones for New York’s K-12 students—as they are for other diseases. And what about a staff mandate, given that COVID cases are way more common in them than students at New York City’s public schools?

“It’s a lot of political and scientific tightroping,” said Barun Mathema, Assistant Professor of Epidemiology at the Mailman School of Public Health at Columbia University.

Whether or not schools require doses could be pivotal in the effort to fully reopen New York City’s massive education system after the summer. The majority of the city’s public school families, especially ones of color, have chosen to stay remote through the end of this school year. Many have expressed skepticism about whether they will feel safe enough coming back in person next fall. Meanwhile, officials are calling for a full reopening this September, and may not want to put any additional hurdles in their way.

Vaccine mandates come with tricky legal hurdles. At a press briefing Tuesday at the Javits Center, Cuomo reiterated that he could not require any individual in New York to get a COVID-19 vaccine until one of the jabs receives full approval. That could “take months,” the governor said.

He added that a mandate would be a “legitimate topic of discussion” if a federal rubberstamp arrives by September. All the shots so far—from Pfizer, Moderna and Johnson & Johnson—currently hold an emergency use authorization (EUA).

“The legality of mandates is less clear under an EUA because the vaccine has not undergone the full FDA approval process with sufficient efficacy and safety data,” said Professor Allison Hoffman, an expert of health care law at the University of Pennsylvania Carey Law School. “There is language in the EUA statute that individuals have to be informed of the right to accept or refuse the product, and the consequences of doing so. This language implies a right to refuse.”

A policy analysis published in April by the Kaiser Family Foundation adds that “Others have questioned whether the reference to “consequences” of refusing a vaccine subject to an EUA includes not only potential health consequences but also other adverse outcomes such as loss of employment.” In Los Angeles, teachers sued to prevent a mandate for COVID-19 vaccines before full approval. Cuomo said he expects vaccines to receive this official license for those older than 18 by fall, though it will likely take longer for children. Pfizer announced on May 7th that it had filed its FDA application for a full license.

But once a vaccine receives approval, states can definitely mandate it for schools, Hoffman added, as they have done across the nation with varying types of exceptions.

After proposing a mandate for state colleges, Cuomo expressed a new urgency to entice a greater portion of people who have been hesitant to get the shot. He acknowledged that the government had played a role in planting the seeds of doubt.

“Young people are not getting vaccinated. Why? They were never the focus. They weren’t even eligible early on,” he said Monday. “This whole COVID was introduced as young people really don’t have to worry about it. And then we reinforced that when we said the eligibility was by age.”

The boards of SUNY and CUNY will vote to approve the requirement at their next meeting, according to the governor, who also called on private institutions of higher learning to adopt the policy. New York University, Columbia University and Fordham University have said they plan to mandate the shots for in-person students in the fall. In March, Rutgers became the first public university to announce a vaccine prerequisite.

How Employees Could Fall Under A Mandate

The state, not the city, also determines vaccine policies for elementary, middle and high school students. For students, the list of mandatory shots currently features about a dozen diseases, including whooping cough, polio, measles, mumps and rubella. These preconditions extend to both public and private schools; New York dropped religious exemptions for vaccines during the measles outbreak in 2019.

Mayor Bill de Blasio said the city is eager to begin vaccinating kids as soon as it’s able, and he expects many more students and adults will be vaccinated by September, but he believes schools will be safe without a mandate.

“We are seeing extraordinary success in our schools, and this is before we’ve been able to vaccinate our kids,” he said. “We look forward to welcoming back every student. There will be lots of health and safety measures in place.”

At a press conference Tuesday, de Blasio said he would not require students to be vaccinated against COVID for the next school year, even though it isn’t his call. Cuomo has not stated whether New York will require the COVID-19 vaccines for K-12 students going to school in person.

Likewise, a spokesperson from SUNY said the new vaccine requirement would not apply to its faculty and staff. (CUNY did not respond to a request for comment.) The state also doesn’t require staff at public schools to be vaccinated, a policy that came under scrutiny during the measles outbreak a few years ago. United Federation of Teachers president Michael Mulgrew has repeatedly said teachers should not have to disclose whether they’ve been vaccinated under federal health privacy rules.

That claim does not appear to be accurate. The state does retain the authority to mandate COVID-19 shots for academic staff.

Public schools can require vaccinations of teachers as a condition of employment.

“Public schools can require vaccinations of teachers as a condition of employment, with disability and religious exemptions as required by the U.S. Equal Employment Opportunity Commission (EEOC),” said Hoffman from Penn Law. “While the union might claim that such conditions are contrary to teacher contracts, asking a teacher to provide health data is not a violation of HIPAA, the federal privacy law.”

The union notes that the state has not mandated COVID-19 vaccines for any public employees at this point. The Kaiser Family Foundation analysis points out that states can set regulations that prohibit employers from requiring vaccines. Collective bargaining agreements may also call for employers to negotiate with unions before establishing a mandate.

A spokesperson for the city’s Department of Education said it is encouraging all school staff and students to get inoculated and that more than half of the school system’s staff—a total of 76,000 workers—have received at least one dose of the COVID-19 vaccine. Last week, the Success Academy charter school network said it would require jabs for all employees by the time it reopens for in-person learning on August 2nd.

Columbia University’s Mathema said, when it comes to requiring vaccines in schools, typically states convene groups of stakeholders and experts who serve as an advisory panel and make a recommendation to the governor. He said they’ll have to weigh the level of community transmission, vaccination, the risk to children and the realistic likelihood that families will choose to get inoculated.

Andrea McArdle's Agent Dropped Her After She Joined Starlight Express

This article is part of our One Issue Explainer series, where we break down mayoral candidates’ stan…