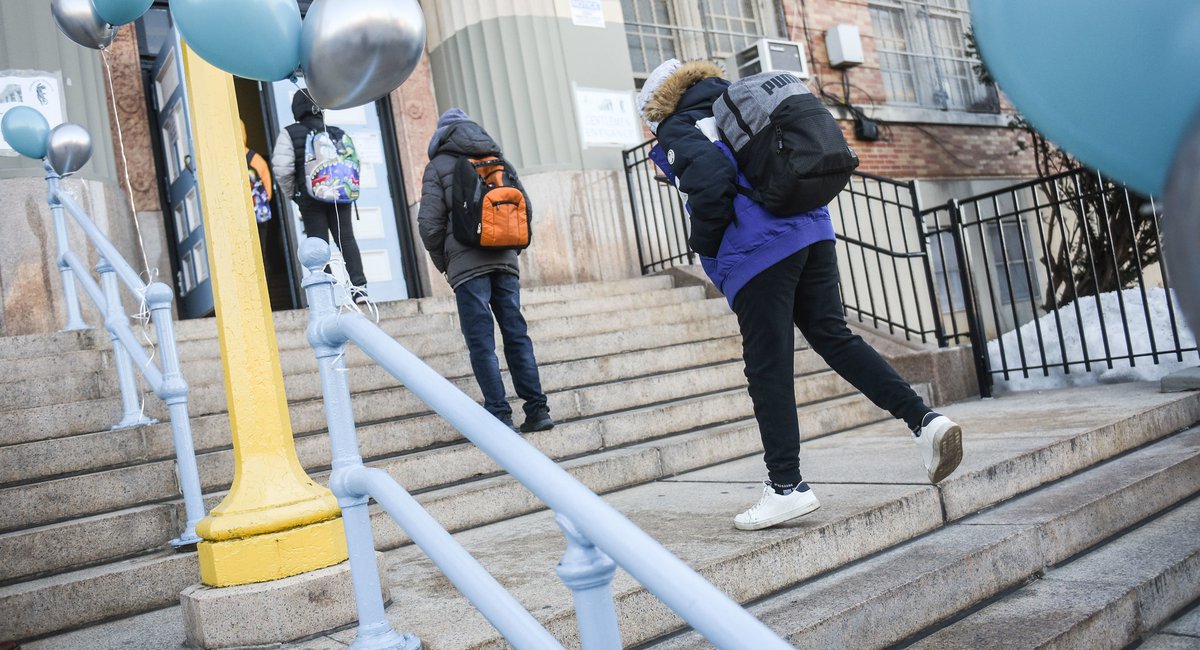 Admissions letters for New York City’s public middle schools are out today, with early data underscoring the impact of the pandemic on the school system. This year, 66,516 students applied to the city’s middle schools, compared to approximately 71,000 last year, reflecting a broader decline in enrollment system-wide.

But the pandemic has also prompted another significant shift: After the city temporarily scrapped selective admissions for middle schools, students from low-income families received a higher proportion of offers to schools that have accepted disproportionately few in the past. The number of students learning English accepted at some of the most sought-after schools also increased. According to the education department, 89 percent of students got into one of their three top choices.

At Mark Twain Intermediate School for the Gifted and Talented in Brooklyn, offers to students from low-income families (those who qualify for free and reduced price lunch under federal guidelines) increased from 35% last year to 46% this year.

The school previously used tests and auditions to select students, but, like all other middle schools this year, switched to a lottery.

“This isn’t surprising that when you reduce barriers by eliminating screens you create more access,” said Matt Gonzales, director of the Integration and Innovation Initiative at NYU Metro Center. “This is where we needed to go, it’s sad it required a pandemic to have a humane admissions policy in the city.”

“I want to see these changes made permanent,” he said.

Ultimately, the next mayor will have to decide whether to maintain selective admissions at the middle and high school levels.

The education department did not offer a breakdown of admissions at the middle schools by race as it does for its most selective high schools, but schools that have served more affluent student bodies have also been disproportionately white. Overall, nearly three quarters of the city’s public school students come from low-income families.

In December, Mayor de Blasio announced the city would pause all selective admissions for middle schools this year, requiring them to stop using test scores, grades, attendance or other metrics to determine admission. Students ranked up to 12 choices, and schools that had more applicants than slots used a lottery.

De Blasio said it was a necessary shift because the pandemic had made those measures either unreliable or totally unavailable: state tests were canceled last spring and schools were given broad flexibility around grading and attendance.

But the mayor also framed the decision as a step toward equity.

“I think these changes will improve justice and fairness, but they’ll also make the process simpler and fairer, particularly given what we’re dealing with this year and all the results of the coronavirus that have changed the way we have to do things,” he said when announcing the overhaul in December.

Integration advocates have been fighting against policies that use tests, grades or attendance to determine admissions for years. Last November, the student-led activist group Teens Take Charge filed a federal lawsuit arguing that admissions screens disproportionately disadvantaged Black, Latino, and under-represented Asian students. They say the screens serve as a barrier for students of color, students from poorer communities, and students with disabilities.

District 15, which covers a swath of Brooklyn encompassing Cobble Hill, Red Hook, Sunset Park, and Park Slope, eliminated selective admissions screens and replaced them with a weighted lottery several years ago. Under the plan, schools gave priority to students who are homeless, English Language Learners, or from low-income households.

Getting rid of screens changed the demographics at some schools. Now in its third year, District 15 generally showed more progress, though students from low-income communities appear more likely to apply to schools in affluent, whiter areas like Park Slope than students from wealthier areas who apply to schools in poorer neighborhoods like Sunset Park, where many Chinese and Latino immigrants live.

District 13 in Brooklyn, which includes Fort Greene, Bedford-Stuyvesant, Clinton Hill, and Prospect Heights, also launched a diversity initiative this year, similar to the District 15 plan. Demographics of some schools changed there as well, though the shifts were modest.

In the News: Lisa Edelstein, Kathryn Hahn, and Tracee Chimo Pallero Are The Sisters Rosensweig, MTC Welcomes New Board Members

As Broadway Prepares for Reopening, Artists Talk Returning 'Stronger and Better Than We Were Before'