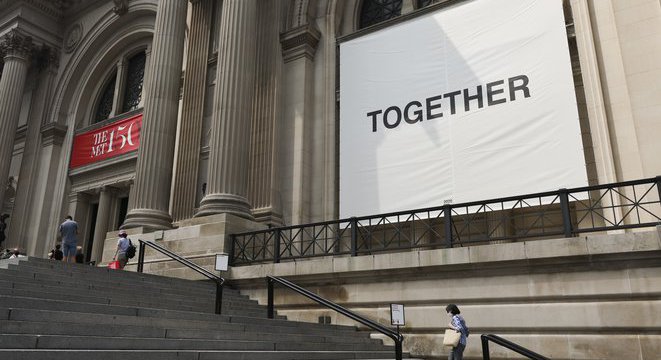 The Metropolitan Museum of Art is opening its doors to city voters for the first time in its 151-year history, joining the ranks of schools, hospitals, and community centers that make up an expanded list of early voting sites for this year’s primary election.

The museum was among 104 sites formally approved by the commissioners of the New York City Board of Elections on Tuesday, an increase of 16 more early voting sites from last November’s presidential election when many voters reported waiting in hours-long lines to cast their ballots.

“We’re excited to be a polling site, to have a role in our democracy. And we are equally, if not more excited to use this opportunity to invite visitors to come and visit the Met,” said Ken Weine, vice president for external affairs at the Met Museum. (If you want to explore the museum after voting, New York State residents can always pay whatever they like.)

It is the first time the sprawling two million square foot cultural jewel will open its doors to city voters. It’s also among the 52 institutions that Gothamist / WNYC reported previously rejected the city BOE’s request to serve as an early voting and Election Day poll site, despite receiving nearly $600 million in tax benefits.

The Met Museum was the only major cultural organization to join the list of early voting sites this year. Lincoln Center and the Brooklyn Museum were added as early voting locations last year. The Borough of Manhattan Community College, which had also turned down previous requests from the BOE, also agreed to be a site this year. The Museum of the Moving Image in Queens has served as an early voting site since 2019, the first year of early voting.

Weine stressed the logistical challenges associated with operating a poll site were significant. He said the Met Museum had agreed to do it before the pandemic but then the building closed for five months. When the November election rolled around, he said, the institution was struggling to stay open and, for the safety of its staff, opted to wait until this spring. He also credited Assemblymember Rebecca Seawright and City Councilmember Keith Powers with advocating on behalf of voters.

“It’s not a small commitment,” said Weine, explaining it would take 18 days on the part of the Museum to set up and break down the poll site, even though early voting itself only runs for nine days, from June 12th through June 20th. Primary Day is on June 22nd.

The actual poll site will be located in the education center of the building. Voters assigned to this site will access the building from the south side at the E. 81st Street entrance through a secure, accessible entrance.

Voters are assigned to specific early voting sites which can change each election, and are not necessarily where voters go on Primary or Election Day.

Two of the highest profile locations from last November—Madison Square Garden and the Barclays Center—are no longer early voting sites. The Barclays Center did not respond to a request for comment. A spokesman for the Garden cited potential playoff games which prevented the arena from committing to the early voting schedule.

While turnout in municipal elections, and particularly primaries, tends to be much lower than turnout in presidential elections, the BOE has taken steps to clear obstacles, including spreading out the number of voters assigned to each early voting site and adding an additional 10 hours of early voting.

Last year, an analysis by the New York City Campaign Finance Board on behalf of Gothamist / WNYC found that the BOE disproportionately assigned voters to early voting sites, with the most voters assigned to Robert Wagner Middle School on the Upper East Side. More than 118,000 were assigned there while other Manhattan sites had as few as 8,000 voters.

This year, the number of voters assigned to Robert Wagner was reduced by 90,000, according to an updated analysis from the NYC CFB. Allie Swatek, a director of policy and research for the NYC CFB, found that many of the voters assigned to Wagner middle school last year have been redistributed to four other early voting sites, including the Met Museum.

“With 10 additional hours and the new early voting poll sites, there should be shorter lines for sure,” said Swatek. “The BOE deserves credit for doing the work to distribute voters among these sites more efficiently.”

While some sites may still see some overcrowding, city election officials are taking steps to ensure that voters can at least check the wait times before venturing out. The city BOE plans to launch a new page on their site with wait-time information for each early voting site.

As Broadway Prepares for Reopening, Artists Talk Returning 'Stronger and Better Than We Were Before'

Read on for some recent theatre headlines you may have missed in today’s news. Tony Nominee Ce…