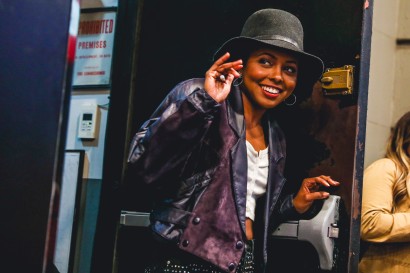 Stars from three of Broadway’s hottest tickets united on Good Morning America May 11 to reveal that their shows—Hamilton, Wicked, and The Lion King—will welcome back audiences for the first time since the coronavirus shutdown September 14. But as these titles and more flood inboxes and social media feeds with reopening announcements, calls for a more equitable and safe theatrical landscape persist. Broadway will be back, but in addition to health measures in the wake of a pandemic, how will Broadway reckon with the spotlight shined on racist, abusive, and intimidating practices as theatres remained dark?

“We’ve taken a lot of steps not only to make sure the theatre is going to be safe for all audience members, but to make sure that our cast and crew have been trained in anti-racism training, also making sure that we as a brand are pushing forward social justice,” said Krystal Joy Brown, representing the company of Hamilton. (Brown joined the cast as Eliza three months before the shutdown). The Lion King‘s L. Steven Taylor (a longtime Mufasa) cited the work of such cohorts as Broadway Advocacy Coalition, Black Theatre United, and Black Theatre Coalition, which have mobilized in the wake of the Black Lives Mater movement to dismantle white supremacy, to ensure the industry is “not only returning, but returning stronger and better than we were before.” Alexandra Billings, the first openly trans performer to play Madame Morrible in Wicked, highlighted the significance of trans youth finding representation on stage in a time when state legislation across the country threatens their health and well-being.

But in a year of wakenings and reckonings, artists have made their voices heard even if in the absence of a stage.

Some performers have vowed to withhold their work and artistry until producers share more specifics. At the recent Broadway United for Racial Justice rally, Tony nominee Adrienne Warren, who up until the shutdown has been starring in the title role of Tina: The Tina Turner Musical, said she would not sign another contract until the lines of communication widen. “Every single person of color that comes in that room comes in with a weight you cannot begin to understand,” she said during the May 1 event. “What I am asking you, Broadway, is that you choose to help alleviate some of that weight. That you make the choice, because you can, and because right now this country is not doing it. Set an example, please.”

READ: Karen Olivo Will Not Return to Moulin Rouge! Musical Upon Broadway Reopening: ‘People Are More Important Than Your Pocketbook’

André Jordan, an ensemble member of the Princess Diana musical Diana (which played nine pre-pandemic previews and intends to resume in December), has taken to Twitter, imploring fellow actors to engage in conversations with producers and company managers about equity and safety moving forward. The musical is in a unique position in that the company has performed on their stage during the pandemic, for a filmed presentation to stream on Netflix later this year.

As the company prepared to reunite for the Netflix production, Jordan says, producers arranged, at the request of cast members, for unconscious bias training, a space for open dialogue about past micro and macro aggressions, and an anonymous hotline. With these implementations, Jordan saw tangible changes. Before cameras were rolling, staging that placed primarily Black performers in positions of servitude was adjusted. Through the hotline company members expressed concern about costume designer William Ivey Long’s involvement in the wake of sexual harassment and misconduct allegations; though Jordan says these concerns have not been publicly addressed by the production, he does note that Long was not present for filming.

Moving forward, Jordan hopes to see that the inclusion of an unconscious bias compliance officer becomes normalized for all productions. “Broadway—musical theatre and plays—we need therapy within ourselves, and we need that outside help to come into our business to be a part of our team and a part of our resurgence,” he says.

As of now, even as dates are announced and tickets go on sale, few productions have confirmed casting for their returns. Jordan says he has not yet entered new contract negotiations with Diana, but does anticipate, based on the production’s reception thus far, that steps like these will be among the stipulations discussed. “If you find yourself saying, ‘I don’t want to rattle, or I don’t know how they’ll react,’ know that this is the exact type of behavior we’re trying to eliminate,” Jordan says, addressing others in shows readying for their returns. “We will work together to give you all the resources and tools that will make the process of coming clean in your house as easy as possible.”

The promise of rising curtains and clean houses arrives on the heels of demands for accountability, which arose in the aftermath of a wave of allegations of abuse and intimidation perpetrated by producer Scott Rudin. An April 22 “March on Broadway” called for Rudin’s removal from the Broadway League (Rudin has since said he will step down) and transparency from Actors’ Equity, the union representing actors and stage managers. In the weeks following the march, organizers have held meetings with Equity leaders about steps being made to respond to these demands.

In the week leading up to the group’s next dialogue with the union (set for May 14), March on Broadway is hosting a three-day series of Instagram Live conversations. The first featured co-organizer Courtney Daniels, actor-activist Davon Williams (equipped with thorough visual aids), and Tony winner Laura Benanti. The three outlined the Black Theatre Matters Bill, a 12-article resolution organized by Williams and crafted with hundreds of others aimed at making the union and industry at large more equitable.

Additional Instagram conversations from March on Broadway throughout the week will touch on some of the movement’s additional demands, such as greater inclusion and visibility for trans, nonbinary, and gender-nonconforming artists (who will be centered in the May 12 stream) as well as those who are deaf or disabled (May 13). Members of those marginalized and underrepresented communities—including Shakina Nayfack and L Morgan Lee May 12 and Ryan J. Haddad and Joshua Castille May 13—will take part, as will Tony winner Stephanie J. Block and Broadway favorite Sierra Boggess on those respective dates.

The group’s inclusion of Benanti, Block, and Boggess—all white, cis female performers with sizable followings—is meant to showcase allies’ responsibility to amplify BIPOC and other marginalized voices without centering themselves or their own discomfort. “These are the conversations that I want people to tune into and truly tap into—especially our allies,” Daniels said in the May 11 stream. “These are the conversations we want to have and want you to start beginning within your circle.”

The stage adaptation of Catch Me If You Can opened on Broadway at the Neil Simon Theatre April 10, 2…

Feud Emmy nominee Jackie Hoffman, who played Yente in the Yiddish-language adaptation of Fiddler on …