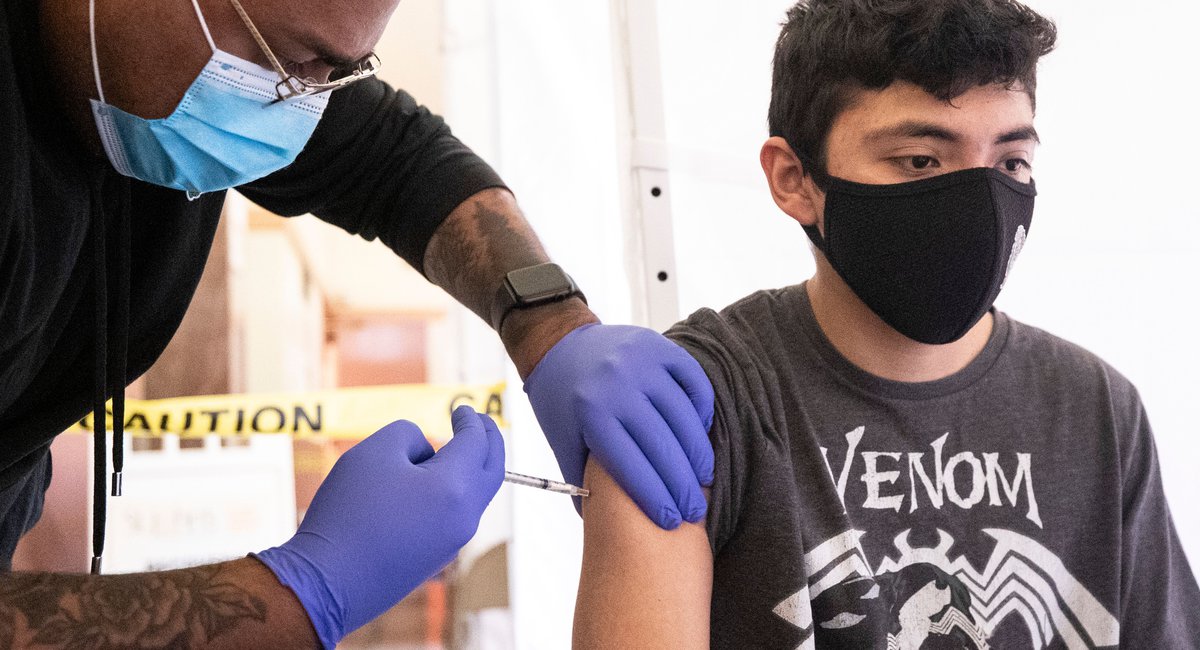 The U.S. Food and Drug Administration authorized the Pfizer-BioNTech COVID-19 vaccine for use in adolescents aged 12-to-15 on Monday. The decision expands the pool of potential recipients by nearly 17 million Americans, according to data from Kaiser Family Foundation. New York alone is home to more than 900,000 kids in this age group.

“Today’s action allows for a younger population to be protected from COVID-19, bringing us closer to returning to a sense of normalcy and to ending the pandemic,” Acting FDA Commissioner Janet Woodcock said in a statement. “Parents and guardians can rest assured that the agency undertook a rigorous and thorough review of all available data, as we have with all of our COVID-19 vaccine emergency use authorizations.”

An advisory committee for the U.S. Centers for Disease Control and Prevention will meet Wednesday to rubberstamp the authorization, after which the vaccine will be available for these teenagers. The move could be crucial to keeping transmission low in New York City and other places that remain undervaccinated but are reopening. In anticipation of the policy change, Mayor Bill de Blasio had promised that young teenagers would be able to be inoculated as soon as a decision is made, whether through city-run vaccination sites, pharmacies or their pediatricians.

The shift in age eligibility also raises questions about whether schools, summer camps and educational activities will require shots against the coronavirus. Governor Andrew Cuomo said Monday that he would require COVID-19 vaccinations for all in-person students attending city and state universities this autumn.

“Young people are not getting vaccinated. Why? They were never the focus. They weren’t even eligible early on,” the governor said. Moderna and Johnson & Johnson are also demoing their shots in adolescents, given their drugs are only allowed for people older than 18. Pfizer’s new authorization lowers their limit from 16. All three companies have ongoing trials in kids younger than 12. Pediatric authorization is viewed as a final step to the shots receiving a full license.

To learn what all of his might mean for New York City parents and their kids, Gothamist/WNYC spoke with Professor Donna Hallas, the director of the Pediatric Nurse Practitioner Program at NYU’s Rory Meyers College of Nursing. The interview was lightly edited for clarity.

The Pfizer vaccine has been in use since December, and millions of people in our region across the country have gotten it at this point. Before today, anybody 16 years and older could take it. But since the start of the pandemic, a majority of younger kids have not gotten seriously ill from COVID? If that’s the case, why vaccinate them?

I think the vaccination of teens 12-to-15 will be a game-changer. We’ve been told that these kids are probably the spreaders, so they have contracted it but don’t have symptoms but spread it to others. But some children have gotten very seriously ill. They’ve gotten the MIS-C syndrome, and they have the long-term cardiac effects of that. Hopefully, their hearts will recover. They’re young, but we don’t know.

This is why the vaccine is so important. It will prevent children from getting seriously ill, hospitalized or even dying from the disease. Plus, it’s going to allow these kids to go back to school, play sports, do their instruments, be with their friends and also to continuously reduce the spread of COVID-19.

This morning, Mayor de Blasio was very optimistic about the city’s ability to vaccinate kids once they’re eligible. City Health Commissioner Dave Chokshi said the plans would include pediatricians and that the Education Department will be helping to get the word out to both parents and students. There aren’t too many details yet about that, but do you think that is the right track to take?

Pediatricians and pediatric nurse practitioners get the kids when they’re babies. We get to know their parents. These children usually come in once a year for a physical, so they trust their providers. That’s an important piece here–for the kids to come in, know the surroundings, know the provider and be able to ask questions. Pharmacies will also play a role because they can vaccinate kids at that age as well.

New York Governor Andrew Cuomo said Monday that both CUNY and SUNY students would be required to get a COVID vaccine before going back to campus in the fall. Do you think that we could see something similar for middle and high school students now that they’re eligible?

It’s probably a little easier right now for college students just because they’re older; they’re 18. Health officials have already started vaccinations for them. Whether the school system for 12-to-15-year-olds will be able to say they have to return with it will depend on the school boards. Right now, every school system has to have a vaccination strategy in place, so kids have to go to school with an “X-number” of vaccines. Whether they can do that for September might also depend upon whether or not the FDA gives final approval, not just emergency use authorization. That might take a little bit longer for the current vaccine that anyone 16 and over is getting.

What are the challenges of vaccinating younger teens that we haven’t run into vaccinating older teens or adults?

Basically, it’s the parents making the decisions for their children, especially in this age group. Anyone under 18 has to have parental consent. So the challenge is, did the parent get the vaccine and does the parent want their children to get the vaccine? That’s why I think going to pediatricians’ offices, PNP offices and talking with the people they trust will help parents make the good decision to vaccinate their adolescents.

A New Kind of City Life in Hunter's Point South

The Off-Broadway favorite Stomp will resume performances July 20 at the Orpheum Theatre, making it o…

For many New Yorkers, putting a mask on before leaving the house has become second nature by now. Bu…