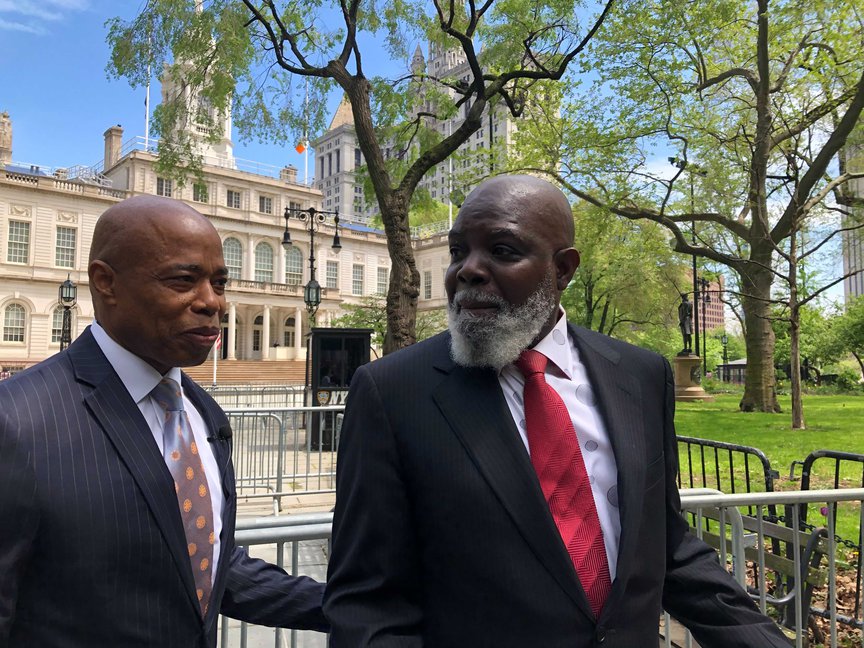 Outside City Hall on a recent afternoon, Borough President Eric Adams stood in a pinstripe suit and tie beside Abner Louima, who’d been badly beaten and sexually assaulted by NYPD officers in 1997. Louima spent two months in the hospital after the attack. His beating set off a wave of protests against police brutality.

“This incident happened over 20 years ago. The average young person now, some were not born,” Adams said. “Police reform is not a 2021 issue. This has been a fight that we’ve been having for a long time.”

In recent weeks, Adams has tried to craft a message that draws in younger voters, recalling his activism against police brutality over many years. But for younger New Yorkers, some of whom were galvanized by the murder of George Floyd last summer and who are pushing for more radical change, that message has mostly fallen flat.

“Young Black progressive are like ‘defund the police, abolish the police,’” said Christina Greer, associate professor of political science at Fordham University. “Older Black homeowners are like ‘where are the police? I don’t want these people on my yard. What is happening? I own a house.’”

Greer said with the clock ticking on the mayor’s race (early voting begins on June 12th) Adams may be better off broadening his base of older voters rather than trying to attract a younger crowd and risk sounding hypocritical.

Among those voters likely to turn out for Adams this June is Alaire Chappell, a 61-year-old resident of the Van Dyke Houses in Brownsville, Brooklyn. After a vigil last month for a mother and her two daughters who were gunned down by the woman’s boyfriend, Chappell said she felt neighborhoods like Brownsville were set up “to explode,” citing high rates of unemployment and a lack of job prospects.

“So you are left to participate in criminal behavior. These young people often want what everybody else wants,” she said. When asked which mayoral candidate might be best suited to tackle those issues, she smiled. “You know I kind of like my borough president. I think he has demonstrated that his heart is for the people. He brings the real person to the floor.”

Adams has been hustling to broaden his base beyond central Brooklyn, recently scooping up the support of his counterparts Bronx Borough President Ruben Diaz Jr. and Queens Borough President Donovan Richards. For the first time, Adams surged ahead of Yang in citywide polls this week. Adams has amassed the biggest war chest of any candidate in the race, with $7.8 million hand as of the most recent filing.

His rise through the ranks of New York City political life has been anything but traditional, as Gothamist chronicled last year. As a 15-year-old growing up in South Jamaica Queens, he was beaten so badly by police inside a precinct house that he urinated blood for a week after, he later told the New York Times in 1999. He joined the police department after being recruited by civil rights leaders, rising through the ranks in his 20 years on the force, and co-founding 100 Blacks in Law Enforcement Who Care, an organization that often openly criticized the NYPD and advocated for Black officers. Later, State Senator Adams was an outspoken critic of stop-and-frisk policy, even testifying against Police Commissioner Ray Kelly.

Over the years in his role as Brooklyn borough president, he has grabbed the spotlight for off-color stunts whether he was shouting “show me the money” on the senate floor when demanding a raise for lawmakers, revolting the press corps with a bucket of drowned rats, telling transplants to “go back to Ohio,” or insisting he’d carry a gun in a house of worship following the shooting at a Pittsburgh synagogue, a statement he’s since walked back.

On the campaign trail, Adams has made tackling the uptick in gun violence his cornerstone issue, rallying at the scene of recent shootings. He supports increasing funding for the NYPD’s Gun Violence Suppression Division, more spot checks at train and bus stations to stem the flow of illegal guns, creating a citywide special prosecutor specifically for gun crimes, and reviving the controversial anti-crime unit that was dismantled last year. Adams does not want to decrease the NYPD budget, one of the central demands of younger activists, but rather redirect $500 million towards gun-violence prevention efforts.

Many of those proposals make younger reformers bristle.

“He has old ways of thinking about what he considers reform,” said Antonio Reynoso, a city council member currently running to succeed Adams as borough president. “The issue is the right issue, the solution is more of the same.

Adams has ceded many younger supporters to candidates like Dianne Morales and Andrew Yang, who have beefy social-media followings, and ways of talking about issues that resonate with younger voters.

“I think a lot of friends of mine are very passionate about racial justice and transformative change,” said Jada Shannon, a 19-year-old media studies major at Hunter College, who said she was most excited about Morales for her positions on police reform, school desegregation and free college tuition. She was considering other more left-leaning candidates in the race such as Maya Wiley, Shaun Donovan, and Paperboy Prince.

She said she felt Adams was “very dismissive of young people’s voices.”

Other baby boomers in the race, peers of 60-year-old Adams, have made strides to recruit younger blood into their campaigns. Scott Stringer, 61, before he hemorrhaged progressive support in the fallout of an allegation of sexual harassment, had recruited a cadre of young left-leaning legislators. Ray McGuire, 64, who is most directly vying for would-be Adams supporters, has recruited athletes, filmmakers, and rappers with younger followings.

In his time in Borough Hall, Adams has used the office to connect with young people across the borough. 18-year-old Jeff Santus, a senior at Midwood High School, first got to know Adams when he was trying to fundraise money for his basketball team as a freshman.

“I was reaching out to community leaders. Nobody responded to me except Eric,” Santus said. “He doesn’t just listen to listen he listens to understand and try to comprehend.”

Santus turned to Adams when he was looking for information on how to become an Emergency Medical Technician. He direct messaged Adams on Instagram who sent him links and a number shortly after. Now he’s working full time as an EMT. “I’m 100 percent for him, many of my youth friends are sold on him. Me and my work partners are sold on him,” Santus said.

Still the generational rift keeps bucking its head on the campaign trail. Two weeks ago Adams told Business Insider he believed the Black Lives Matter movement of last summer was propelled mainly by, “young, white, affluent people who are coming in and setting the conversation,” a comment that sparked immediate backlash from local organizers of color.

And while Adams doesn’t boast much of a social media following, that hasn’t stopped him from going viral. Last month, a video he made as a State Senator in 2011 was recirculated on social media. In it, he encouraged parents to search their children’s rooms for guns, bullets, and drug paraphernalia, and showed him probing the insides of a teddy bear. It was reminiscent of another campaign in 2010 that didn’t age well, where he’d encouraged young men to pull up their pants, with a slogan “Stop the Sag.”

It did not take long for another mayoral hopeful, Paperboy Love Prince, a 28-year-old rapper and artist, to remix the video for a song “Eric Adams Please Get Out of My Room.” The video was viewed more than 20,000 times, getting much more attention than any recent Adams campaign videos.

“He was just doing what he thinks was best. You don’t know what’s going on, you’re so disconnected you’re just doing what you think is best,” Paperboy Prince said about Adams, adding he still had a lot of respect for him.

Voters under the age of 30 can be fickle. Last year, they turned out at higher rates than they had in a decade, motivated by anti-Trump activism and calls for police reform. But that’s no guarantee younger voters will feel motivated to vote in local elections this June. Adams has been trying to connect, specifically about his long history working on police reform.

But those appeals have largely fallen on deaf ears. When asked about Adams’s direct appeal to younger New Yorkers, CUNY student Jada Shannon said she was unmoved.

“For me and a lot of my peers, we’ve seen over the past decades that efforts to reform policing have not made us safer,” said. “He thinks this is the only route we have to make it better and that just isn’t true.”