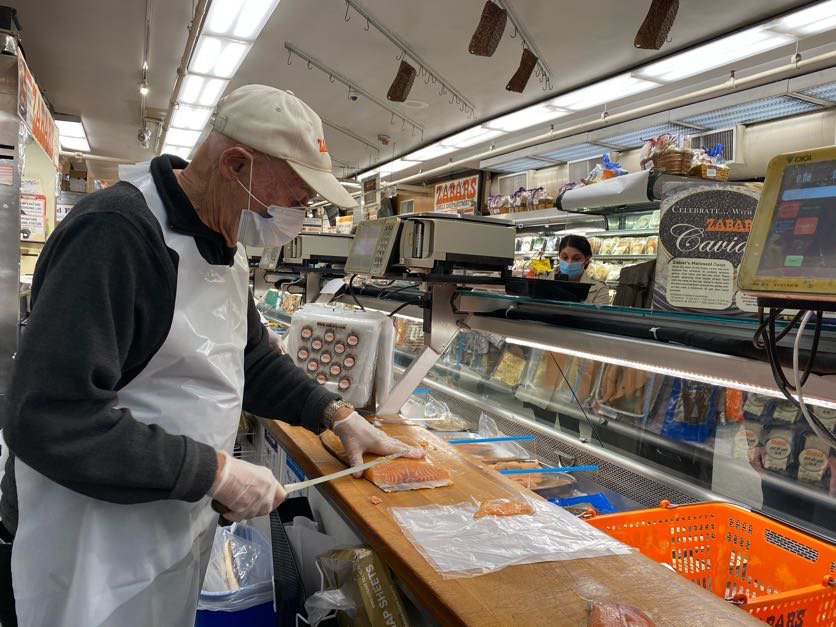 When the pandemic began, lox slicer Len Berk was furloughed from Zabar’s. At first, as Berk recounted in the Forward last year, he was fired because, with his supervisor saying, “I love you, but you’re over 90 years old and you’re in the group that is most susceptible to the virus and if you got it, if anything happened to you, I could never forgive myself.”

Berk returned to work last month, and on Monday, the 91-year-old was welcomed back by both Manhattan Borough President Gale Brewer and Lieutenant Governor Kathy Hochul, who cited his work ethic.

In an exchange outside the Upper West Side gourmet food emporium, Hochul said it was “big deal” that he had come back. Berk demurred, “I don’t know about a big deal, but it’s a lot of fun.”

“People see you behind the counter, they feel like we’re getting back to normal,” she pointed out. “That’s what it’s all about.”

“Getting back to normal, that’s a good thing to symbolize,” Berk agreed.

“You’re the embodiment of that,” Hochul said, with Brewer next to her. “Gale and I are dubbing you that—Mr. Getting Back to Normal.”

Inside the store, Brewer presented Berk with an appreciation for his “dedicated service” for the past 26 years on the Upper West Side, “known as the Lox Whisperer,” while the lieutenant governor gave him a letter citing his expert lox slicing skills.

Hochul also met with Brewer to talk about the Upper West Side recovery—and learned that Zabar’s is looking to hire more staff.

Wished him congrats on his return to work & his 26 years of putting a smile on the faces of countless New Yorkers in the UWS.

A reminder why supporting our small, locally owned businesses is so important. pic.twitter.com/QxrzptXz9K

Berk had been a certified public accountant until he retired in 1994. He told NPR in 2015 that a friend told him about an help wanted ad looking for a lox slicer. “So I applied for the job. I sent the owner an email listing 10 credentials: uh, I’ve been one of your best customers; I’m reliable; I’ve always been a fish person,” Berk recalled. An owner then replied, “What kind of a CPA wants to slice lox?”

He described a kind of zen while he’s working, “When I’m slicing, I’m slicing. Very often I get lost in the lox. Somebody will say, ‘Do you hear what I’m saying?’ And I would say, ‘Yes I do, but I’m very involved in slicing your salmon now.'”

In this 2014 interview with The Forward, Berk explained that slicing lox is, well, very sensual:

Berk confirmed to the NY Post that he was fully vaccinated as of February.