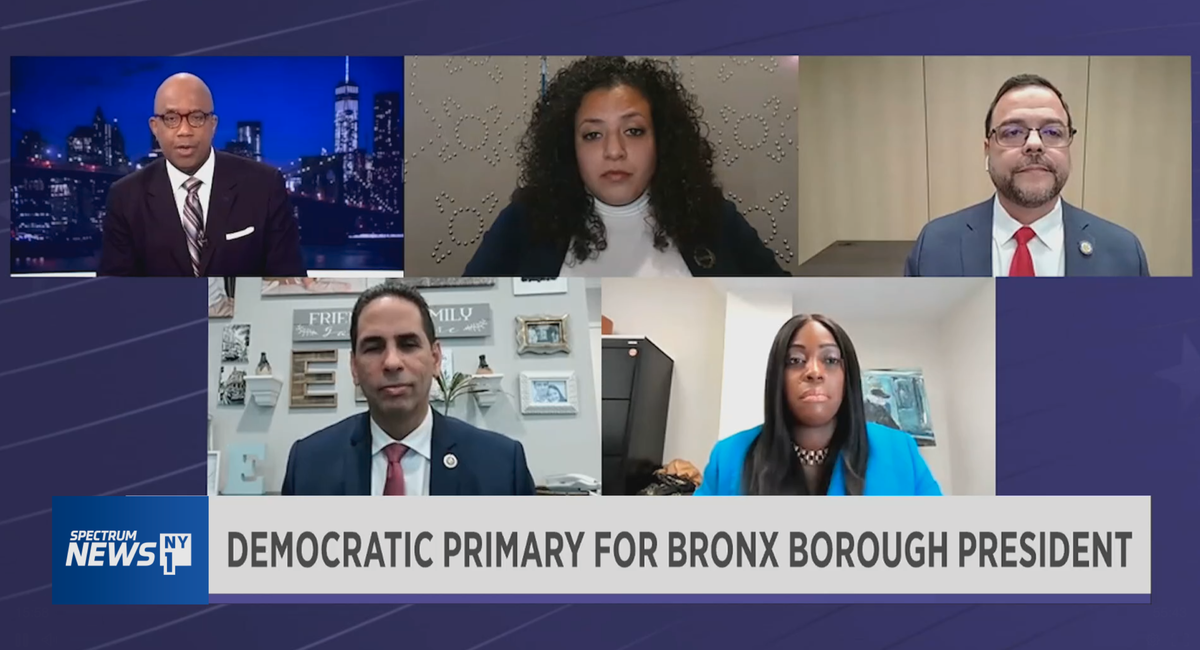 The leading Democratic candidates in the race for Bronx borough president offered divergent views over how they will lead the city’s most impoverished borough in the first televised debate ahead of the June 22nd primary.

The virtual debate by Spectrum News/NY1 featured four of the five candidates on the ballot for the position, often considered a figurehead role whose power often comes from having an unlimited bully pulpit that amplifies the borough’s issues. It’s not the first such gathering for the candidates, who have been regularly taking part in forums for months. Friday’s pre-taped debate was somewhat more contentious, with candidates able to directly question their rivals over qualifications and record.

READ MORE: What Does A Borough President Actually Do?

With the Bronx impacted by the pandemic, leading to an unemployment rate of 14%, moderator Errol Louis largely focused the debate on getting a handle on the pandemic and an economic recovery. He first asked candidates how they would respond to the pandemic in the borough while allowing them to assess their own performance in helping residents during the early days of the pandemic last year.

Nathalia Fernandez, a candidate and Assembly Member representing the 80th Assembly District, said it will take a large-scale education outreach campaign to encourage residents to get vaccinated. She said by bringing the vaccine to residents it will help get the Bronx “back into the normal life that we remember.”

Councilmember Vanessa Gibson, another candidate, agreed that vaccine education is vital to convince residents of its effectiveness. Gibson said if elected she would dispel any rumors about the vaccine.

“We know that historical content [sic] in many of our communities of color, we know the hesitancy, as well as the anxiety,” Gibson said. “We have to let health professionals work with us and walk with us on this journey because many of our residents are worried about side effects.”

Another candidate, Councilmember Fernando Cabrera, said his plan would involve targeting young people reluctant to get a shot. State Senator Luis Sepulveda, another candidate who remains a contender despite calls from rivals to resign following domestic violence charges, said his plan would bring the vaccine to residents who have not visited a healthcare provider. All candidates pointed to their initial efforts in getting scarce personal protection equipment to Bronx residents in the first months of the pandemic.

Candidates were also asked how they would respond to bringing businesses back on track following the pandemic. They all agreed an infusion of money is needed for small businesses through grant and loan programs. Cabrera said priority should be given to business owners with roots in the Bronx. He also wants affordable childcare and apprenticeship programs spearheaded by corporations looking to do business in the Bronx. “We deserve it. We gotta get our fair share,” Cabrera said.

Gibson said she would create a task force to determine what jobs are available in a number of sectors, namely construction and plumbing trades.

Candidates appeared remotely by video during the pre-taped debate and gave brief opening statements before answering questions posed by Louis. The candidates were also able to ask questions of their opponents, in a portion of the evening that grew contentious.

Gibson asked Cabrera what he would do to help jumpstart the revitalization of the Kingsbridge Armory, where a massive ice skating rink project for the vacant Armory has stalled for years after the developer has struggled to secure financing for the project. Cabrera, who approved the ice skating rink project in 2013 as the district’s councilmember, said he would push to reopen the bidding process to create a “destination place” at the Armory. Sepulveda was also asked why Cabrera had supported a cut of the NYPD’s budget, coming at a time when protesters pushed the city to defund the police. Cabrera, who has received an endorsement from the Sergeants Benevolent Association, said his vote was purely driven by the lack of funds coming from the state. Fernandez also questioned Cabrera on why he accepted campaign contributions from bad landlords even as he frames himself as a champion for tenants.

“I actually was the one who came up and passed the tenant bill of rights; been able to have the only district, unlike your district, where we have not experienced gentrification,” Cabrera said. “I know how to bring affordable housing units into my district.”

Despite Cabrera’s assertions that gentrification hasn’t happened, the district does have the highest number of eviction filings in the city. Experts have studied how rising numbers of evictions of lower-income tenants come as gentrification intensifies.

Cabrera asked Fernandez, asking about how many affordable housing units she has lobbied to come into her district. Fernandez said there have been few, with one massive development project coming to the northwest section of her district, bringing 200 units.

The line of questioning toward one specific candidate is often an indicator that they are a frontrunner in the race. Cabrera is the most conservative Democrat in the race compared to his fellow candidates. A three-term councilmember, Cabrera has so far raised $781,332. That’s nearly double the amount that Gibson has raised, at $406,771, the second-highest amount in the race. But Gibson has attracted a large number of union endorsements, mainly the influential 32BJ union, the United Federation of Teachers union, and the Jim Owles Democratic Club.

Read on for more theatre news you may have missed in today’s headlines. Industry Pros Teach Ne…