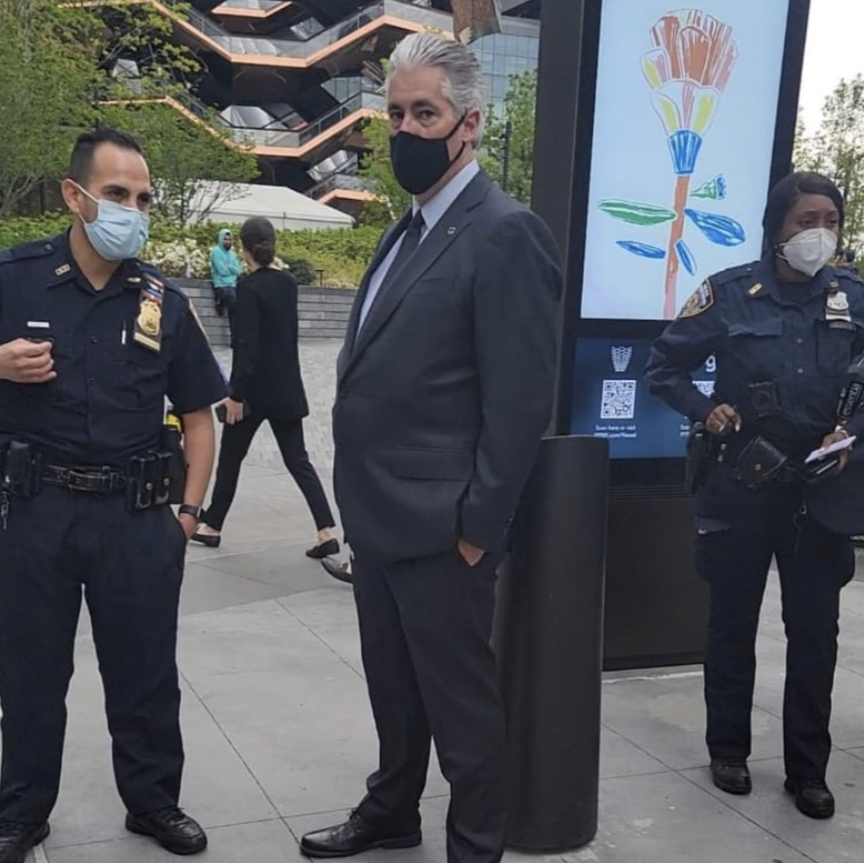 On two days this week, police officers issued a total of four summonses to cart operators on 33rd Street between 10th and 11th Avenue in Manhattan. In one video shared with Gothamist, an NYPD officer can be seen talking to a Hudson Yards security guard, before telling the angry vendors: “This has nothing to do with us. They don’t want you on their property.”

While the Related Companies’ mega-development spans an unprecedented 18 million square feet, it does not include the public sidewalk on 33rd Street. The width of that sidewalk is 13 feet, spacious enough to accommodate a food cart under city’s law, according to planning documents from the Manhattan Borough President’s Office.

In the view of Mohamad Awad, an Egyptian immigrant who has sold hot dogs and other street food on the sidewalk since 2014, the summonses are part of a pattern of harassment aimed at chasing the carts from Hudson Yards altogether.

The police and security attention started when Hudson Yards opened in 2019, he said, and has accelerated throughout the pandemic. Earlier this year, the vendors discovered that Related had installed a large planter on the corner, and had enlarged two tree pits — an apparent effort to landscape out the food carts from their longtime spot. In response, Awad built a four-foot long cart that fits between the two pits.

“I have a very simple message for the Hudson Yards management: Please stop playing God,” he said. “Just because you don’t like us doesn’t mean we don’t have rights to be here.”

At a press conference on Friday, street vendors and their supporters likened the glimmering office and retail complex, which received over $5 billion in taxpayer money, to a playground for the wealthy, disconnected from the needs of most New Yorkers. They held signs calling for “more churros, less cops” while comparing founder Stephen Ross to a shark feasting on small businesses.

“You built this property and these fancy glass towers. Good for you. But you have to accept New York City. You can’t change the rules,” said Mohamed Attia, the executive director of the Street Vendor Project. “No matter how weak the mayor is, no matter how corrupt the NYPD is, that’s not going to happen.”

In an email, NYPD spokesperson Sophia Mason defended the officers, saying the vendors had been given repeated warnings about the cart’s taking up “congested city space.” She did not respond to questions about why the NYPD was involved in vendor enforcement. Emails sent to the Mayor’s Office were also not returned.

Speaking alongside the vendors, Manhattan Borough President Gale Brewer said the tickets were wrong, and likely the result of a new group of Midtown officers unfamiliar with the rules around street vending. She vowed to set up a meeting with the local precinct and the cart owners, while calling on de Blasio to stick by his commitment to remove cops from vendor enforcement: “If you make a policy stick with it.”

A spokesperson for Related declined to answer questions about their involvement with the NYPD, and the purpose of the landscaping elements.

In an emailed statement, the spokesperson said: “Vendors must operate legally and safely and the city has clear regulations that they enforce to ensure everyone is following the law. Hudson Yards, the High Line and the surrounding area experience extraordinary visitation and as a result, public open space needs to be managed for pedestrian safety and FDNY access.”

As the temporary shutdown of Broadway continues, Playbill is reaching out to artists to see how they…