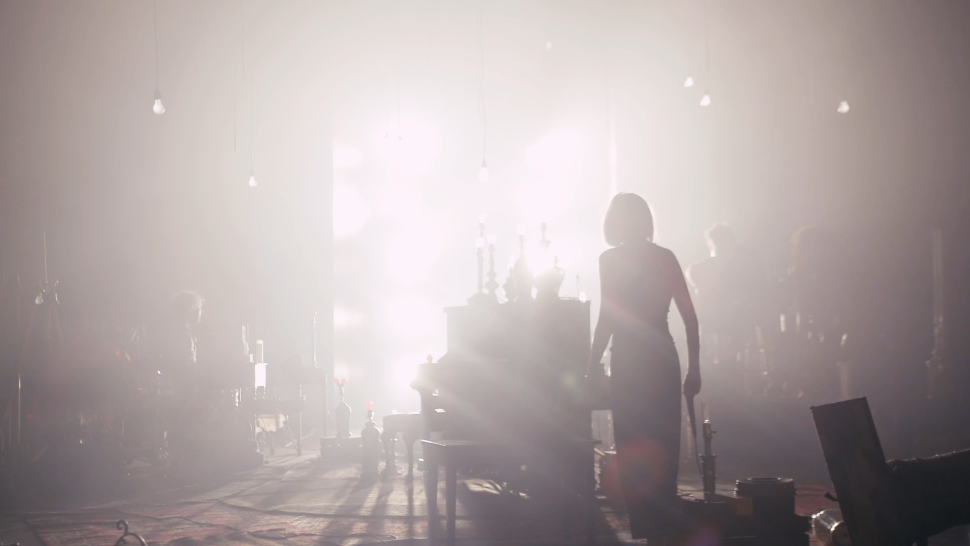 This spring, Heather Christian’s Animal Wisdom will unfold on screen rather than on stage. The writer-performer’s show originally debuted at The Bushwick Starr in 2017 but now gets a film adaptation. Watch the trailer above ahead of its release May 15 on Broadway on Demand as part of the National Theatre Network.

In Animal Wisdom, singer-songwriter-soothsayer Christian lays to rest the souls that haunt her, shape-shifting between rock star, folklorist, and high priestess, as she conjures a constellation of souls in an effort to confront her family’s mythologies.

The film is presented by Woolly Mammoth Theater Company and American Conservatory Theater. For more information and tickets, click here.

What was it like being able to film a theatrical piece both on stage and outside its natural environs?
Heather Christian: It was honestly pretty great. I say this in the program notes of the film, but it bears repeating: I am a form nerd. One of my greatest delights as a maker is taking something and turning it into something else. I like turning concerts into plays, plays into albums, an old classical piece into a new pop song. I’m constantly doing this with artworks by other artists (either intentionally or not), so why not do it with my own? Or at least, that is the attitude I had going into this, and that curiosity and nigh-cavalier attitude towards “adaptation” has sustained me in this process thus far. Also, we are calling this a film, but Animal Wisdom in this incarnation didn’t want to fully be a film nor fully a filmed theatrical performance. It wanted to dance between the two. It felt like we were making up a form as we went, and, in doing so, could make up (or break hard) the rules as we went along—which is a pretty good time indeed.

How does Animal Wisdom and its themes of grief apply to the realities of the past year?
I think everybody that’s familiar with it knows that Animal Wisdom is a piece about grief and how we deal with it. When I first made the show, it felt scary and, quite frankly, presumptuous to walk into a room and say “Listen, I know you’re grieving something and so am I, so lets deal with it.” After this past year, it doesn’t feel so presumptuous. It’s just a fact that we are all grieving, reflecting, re-structuring our psyches and reinventing our perspectives, so it feels like a continuation of a conversation that we are all having alone with ourselves in our homes. I’m hoping this can serve as an act of catharsis (albeit, likely, one of many) that I, for one, might need to ritualize the letting go of this current isolated and introspective period of loss and move on to reengaging with people without falling to pieces.

What did your collaboration process with Amber McGinnis and Emilyn Kowaleski look like?
Maria Manuela Goyanes, the artistic director at Woolly Mammoth, has lovingly been referring to us as a “tripod” or a “hydra,” and I think that just about sums it up. Both of these humans are such deeply thoughtful listeners and masterful artists that they were somehow able to absorb this piece into their bloodstreams and make artistic decisions from a highly intuitive and informed place. From a purely technical standpoint—this film is about a theatre piece that takes place in and around a theatre until it becomes too big and busts open at its seams. It’s a frame within a frame and, because of that, we needed a stage direction perspective (Emilyn) and a film direction perspective (Amber).

Non-technically, we worked side by side and intimately. Both gave me acting notes and screenplay notes, both grabbed my arm and walked around the block with me if I needed a breather. In all honesty, this was one of the most holistic and successful artist-writer-director relationships I’ve ever had, and it is proof that blurry-lined creative partnerships and power-shares can indeed work if all parties are rigorous and generous listeners who are not hung up on absolute control.

What can audiences expect from Animal Wisdom?
A virtual community reveling and reckoning, a handful of intimate stories about my family, a reconsecration of a theatre that has been dark for a year as well as a reconsecration of your living room, and a whole lot of deeply felt music that I’ve poured every ounce of my heart into.

Is there anything audiences should do at home to create an immersive experience? (i.e. food and drink pairings, buy candles, decorate with old framed photos, etc.)
Definitely watch after dark. If you don’t own a candle, I’d pick one up beforehand. (Is there anyone who doesn’t own a candle? Maybe.) And I know this takes away one of the cool things about watching a piece at home, but: watch it in one go. Don’t pause it to pee or pour a glass of wine. Get yourself good and ready to sit for two hours comfortably with everything you might desire in arms reach and be with us in real time.

Broadway's The Phantom of the Opera Sets October Reopening

More than a third of the state’s residents are now fully vaccinated against COVID-19, including more…

Read on for more theatre news you may have missed in today’s headlines. Billy Porter Delivers …