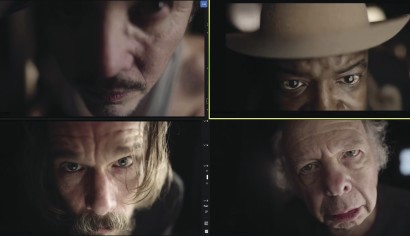 A streaming version of Samuel Beckett’s Waiting for Godot, the first offering from The New Group Off Stage, a new venture from Off-Broadway’s The New Group, premieres May 6 at 7 PM ET.

Directed by Scott Elliott, the classic will be available at TheNewGroup.org. The cast features Tony nominee Ethan Hawke (The Coast of Utopia) as Vladimir, Tony recipient John Leguizamo (Latin History for Morons) as Estragon, Wallace Shawn (Aunt Dan and Lemon) as Lucky, rapper Tarik Trotter as Pozzo, and Drake Bradshaw as Boy.

“This project is the epitome of what we mean by ’theatrical expressions in different media’: bringing together top tier artists across disciplines—film, television, stage, music—to collaborate in a hybrid, on-screen world, finding a way to make a play newly alive for themselves. It was a unique and singularly meaningful experience for all of us,” New Group Artistic Director Elliott said in an earlier statement.

In Waiting for Godot, two wanderers wait by a lonely tree to meet up with Mr. Godot, who they hope will change their lives for the better. Instead, another couple of eccentric travelers arrive, one man on the end of the other’s rope.

Waiting for Godot is produced by The New Group Off Stage in association with John Ridley’s Nō Studios and Frank Marshall and co-produced by MiLa Media.

Look Back at John Leguizamo’s Solo Shows on Broadway

Broadway's The Phantom of the Opera Sets October Reopening

The city said it is disbanding the Absent Teacher Reserve, a pool of teachers who have been cut from…

In a musical, all of the design elements need to fuse together to create a cohesive look and atmosph…

Check out an exclusive clip of Grace McLean and the cast of Row singing ‘Independent Spirit,’ which …