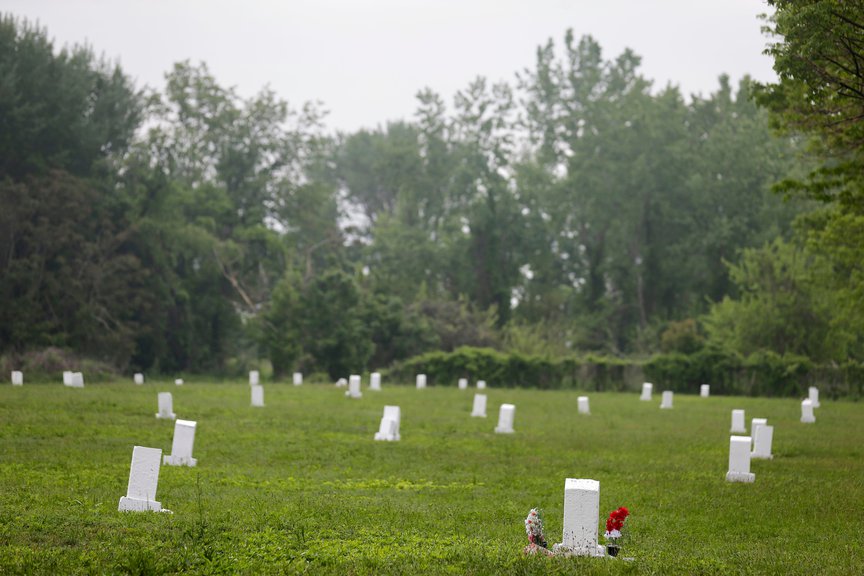 For more than 150 years, the city’s Department of Correction has managed Hart Island. The public cemetery is the final resting place for more than a million people, including unidentified New Yorkers, those whose families can’t afford private burials, and many who died during public health calamities such as the HIV/AIDS crisis.

The city had long employed people incarcerated on Rikers Island to bury the bodies. The job had high turnover in the best of times but more inmates began to refuse the task as COVID-19 overtook the city in March 2020. As an incentive, the city offered inmates a pay bump, raising their compensation to $6 an hour. Before that, inmates reportedly made less than $10 a day to bury bodies, which were arriving much faster than usual due to the pandemic. Soon after, the city shifted to outside contractors to manage the job. About 1,200 people are typically buried on Hart Island each year, but that number more than doubled to 2,666 in 2020, according to the city’s Office of Chief Medical Examiner.

The jurisdiction of Hart Island is now slated to be transferred to the Parks Department this July, meaning incarcerated New Yorkers will be permanently relieved of the duty. The move, resulting from a package of laws passed by the City Council in 2019, is part of a broader project to improve the landscape and operations of the cemetery and make it more accessible to the public.

But questions remain around the changes underway, including what the future visitation policies, transportation, burial process and grounds of Hart Island will look like. All of that will depend on which vendor is awarded a contract to manage operations moving forward, and the city is still in the process of reviewing proposals, according to the Human Resources Administration. The role the Parks Department will have is unclear—and the deadline is rapidly approaching.

“Hart Island has been treated as a topic of shame in this city, and it’s largely been kept out of the public consciousness of New Yorkers,” Council Member and health committee chair Mark Levine, who sponsored pieces of the legislation, said during an oversight hearing on Hart Island Wednesday. “It should be a dignified place open to the public, not just to people who have loved ones buried there. A place which uplifts and celebrates the history, offers reverence to the stories of those who are buried there, including victims of the most recent pandemic.”

Some initiatives are already making the cemetery less menacing. The island recently underwent shoreline restoration to stave off flooding and sea level rise–a long-planned project intended to prevent human remains from washing up on nearby shores, as they did following Hurricane Sandy in 2012. Mayor Bill de Blasio’s executive budget also includes more than $50 million in capital funding to demolish dangerous structures on the property.

“The buildings are scary to people who visit,” said Melinda Hunt, founder of the Hart Island Project, which created a virtual map of people buried there. “They’re a reminder of Hart Island being managed by the penal system for a very long time.”

Because people are buried on Hart Island in plain pine boxes without embalming, it is considered a natural burial site. Hunt has urged the city to preserve the natural burial process and suggested that, with the right upkeep, the cemetery could become an appealing option for environmentally conscious New Yorkers who want to be buried in a way that minimizes the carbon footprint and nourishes the local ecosystem. She said it should be used as a park, in addition to a cemetery, to increase engagement with the island among the general public.

“There are many City Islanders that do have relatives that are buried there,” one resident of the small beach community said. “To become a national park or any type of destination, other than respectful remembrance of the dead, personally, I would find appalling.”

Turning Hart Island into more of a tourist destination would also call for changes in transportation. Workers, visitors, and the deceased can currently only reach the island via a ferry from nearby City Island in the Bronx. Those who are visiting loved ones must make an appointment five days in advance.

“[DOC’s] involvement justifiably involved security concerns that required family members visiting the graves of their loved ones to be accompanied by DOC staff,” Councilman Peter Koo said during the hearing. “This negatively affected the visitation experience.”

Any future plans for the island will have to be informed by a burial capacity study being led by the Human Resources Administration. As part of the efforts to improve city burial services, City Council members also said Wednesday that they want to reduce barriers for people seeking financial assistance for funeral expenses. The city approved only 13% of the 3,549 applications for burial assistance in 2020. In many cases, requests were denied because of missing paperwork, according to Natasha Godby, deputy commissioner of emergency and intervention services at HRA.

She said eligibility requirements are set by the state and that “the bar for the program is quite high.” During the pandemic, the city increased the amount of burial assistance offered from $900 to $1,700, a change Godby said would be made permanent.

“I would like to see this be a place that is not only the option of those with no other place to turn, but the kind of place that some New Yorkers feel like would be a good final resting place,” Levine said of Hart Island. “We’re very, very far from that goal.”

Check out the Tony nominee Ariana DeBose above in the new R&H Goes Pop! music video to “Shall We…

The original Broadway production of Annie opened at the Alvin Theatre (now the Neil Simon) April 21,…