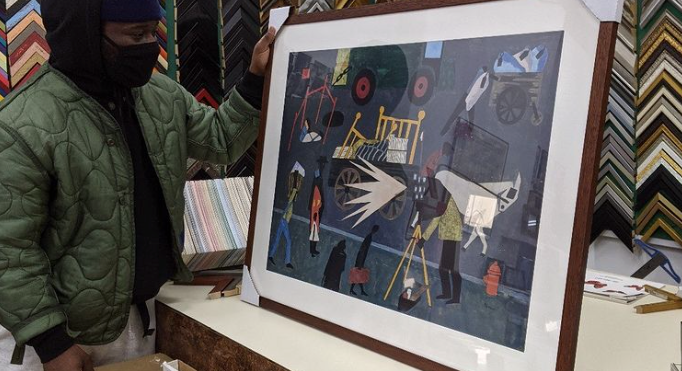 As the owner of a custom framing store, Lurita “LB” Brown knows which objects her customers feel strongly enough to put behind glass. She noticed a shift when people were stuck at home during the pandemic.

“They’re looking around and saying, ‘Oh, I remember that photograph, what did I do with it?’”she recalled. “They go to the car, ‘Oh, the glass was broken.’” Other clients found works of art they’d gotten from relatives and decided to have them reframed.

These works of art weren’t all just for nicer backgrounds on Zoom. Brown saw similar behavior after the September 11th attacks.

“It’s almost the same human. emotional connection to family, to neighborhood, to things that people want to embrace and bring it in their home,” she said.

This emotional connection during the pandemic is part of why Clinton Hill Simply Art & Framing is still around. After 30 years in business on Myrtle Avenue, Brown has learned how to pivot in changing times, embracing her strengths while also finding new customers. It’s no small feat, considering how the city lost more than 630,000 jobs last year and retail was among the hardest- hit industries. A survey of minority-owned small businesses in New York City, conducted by the non-profit Local Initiatives Support Corporation, found half were still unable to pay their full rent as recently as February.

A former Ebony Magazine advertising executive, Brown originally opened the store in 1991 as a gallery selling posters and prints by people of color, mostly to African American collectors. She featured emerging artists like Danny Simmons and Jimmy Greene, whose Children’s Cathedral mosaic is part of the Utica Avenue subway stop. She soon added custom framing. That put her in a good position when gentrification swept through the neighborhood, and brownstone owners came by with their own artworks.

“They understand preservation framing,” she said, adding that these customers also valued having a neighborhood business.

When the pandemic struck, Brown had to close her store for three months. But she said she didn’t panic.

“I knew that I had a certain clientele,” she explained. “I have a high repeat business. I have a high referral business, and I have now a younger purchaser of my services that’s moving in the neighborhood.”

The customers dropping by on a Saturday afternoon in early spring illustrated her point. Crystal White, 55, said her ex-husband first came to the shop about 20 years ago. She brought along a basketball-themed poster with broken glass from her son’s bedroom. It was originally framed at the store. She was driving to have it fixed in downtown Brooklyn, but stopped en route. “I’ll go to my friend on Myrtle Avenue” instead, she said.

White waited by the door of the little shop, for social distancing reasons, while Brown showed 24-year-old Raven Small different colored mats to enhance a reproduction of a painting by Georgia O’Keeffe.

Small moved to Flatbush recently from Los Angeles for work, and said she’s never had anything framed before because she previously lived with her parents.

“I’m really excited to have a space that I can call my own,” she said. She heard about Brown’s shop through another Brooklyn store owner she follows on Instagram.

“She came here and I saw her post about it,” adding that she loves that the frame shop is Black-owned. Small also picked out a Diego Rivera reproduction from Brown’s collection of prints in the front of the store.

Word-of- mouth has definitely helped Brown’s business, especially with younger customers on social media. But the neighborhood is also a big factor in her success.

Clinton Hill isn’t reliant on tourists or office towers. It’s got college students from the Pratt Institute and people who work in different industries at the Brooklyn Navy Yard. But they’re not so dominant that their absence during the pandemic caused a collapse in local businesses, said Chad Purkey, executive director of the Myrtle Avenue Brooklyn Partnership.

“I think we are in a little bit of a sweet spot,” he explained, adding that the businesses are roughly one third restaurants, one third personal services, and one third retail.

Purkey said about 10 businesses closed since the pandemic and 10 more opened, making it a typical year. He thinks that’s because more people were home and able to patronize the shops and restaurants, even if some left town or decamped temporarily to summer homes.

“Our neighborhood isn’t defined by one demographic category,” he said. “It’s not high- income, it’s not low-income. It’s not entry-level, working class. It’s not professionals. It’s a mix of all of that and I think that that’s really worked out well for us and for our businesses.”

But Purkey also said a lot of the businesses needed government funding to get by, or landlords willing to reduce their rent. Brown didn’t. She said she already had a good long-term lease and enough savings to pay her bills when she had to close for three months. Still, it’s been a hard year.

“It’s not fun at all,” she said. “Because I’m the everything to keep this going.”

Brown can only manage two orders at once per customer and limited her store hours. She has a backlog piled up in the shop’s basement where she works by herself. Prior to the pandemic she said she had one full-time employee and three part-timers, but she hasn’t brought anyone back because she’s afraid to work with others in such a small space as long as the virus is out there.

“I could probably hire them,” she said, but “I’m not very comfortable. The shop means we’ve got to have close proximity.”

Custom framing is labor-intensive; it requires sizing and cutting the mats and glass. The industry has been shrinking as frames are increasingly mass-produced by large businesses, like Michaels, and people shop online. Brigette Thomas, an industry research analyst at IBIS World, estimated there are now about 4,050 small custom framing shops nationally, compared to more than 5,000 five years ago.

But people also turned to home improvements during the pandemic. Kimberly Biesiada, editor of

Picture Framing Magazine — which included a story about Brown in its April issue — said many shops saw a boost despite a shortage in wood and other materials that caused delays.

“We have heard from many framing retailers across the U.S. who say they have been busier than ever since reopening last summer, with no sign of slowing down,” she said.

Brown said she’d hire a couple of workers if she gets a grant to buy computerized equipment so mat cutting is more efficient. She’s debating how to upgrade and could also use a manager to help lighten the load. But after 30 years, she said her story proves how a small local business can survive a terrible year, if it’s got the right mix of customers, reputation, and experience.

“I don’t think that I’m an oddity,” she said, noting other businesses made it through the pandemic without getting attention, “because the number base is so much greater for those who will fail than the focus on those who have survived it.”

Prosecutors Wrongfully Convicted Three Men Who Spent 24 Years Behind Bars. Will They Be Disbarred?

Playwright Katori Hall has been named this year’s recipient of the Pulitzer Prize for Drama, f…

45 Broadway productions opened in the 2011-12 season. Ten were directed by women. Three plays were w…