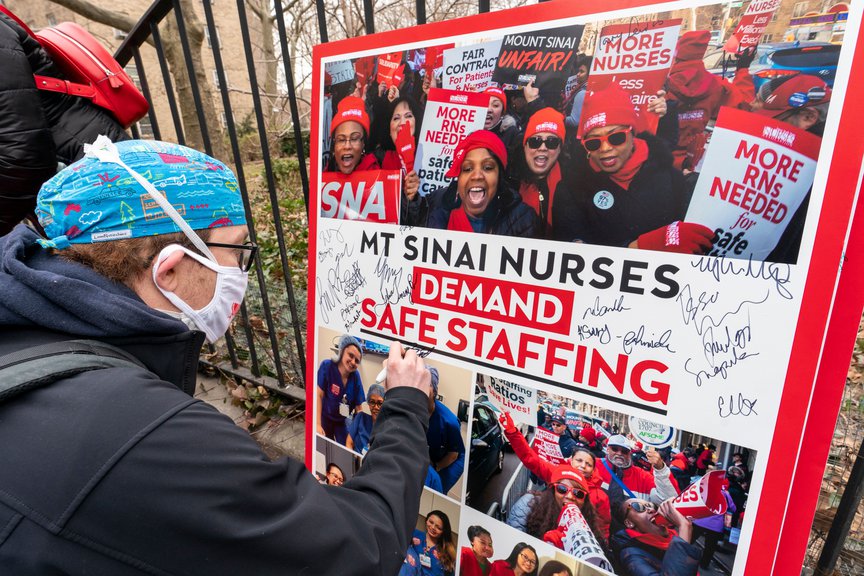 After years of languishing in the state legislature, measures to create minimum staffing requirements for hospitals and nursing homes passed both houses on Tuesday.

“We have been fighting in some way, shape or form on this staffing issue for decades,” Debbie Hayes, a nurse and area director for the labor union Communications Workers of America, said during a press conference on Tuesday. “People at the bedside will tell us people have died because there has not been the staff needed.”

Previous legislation pushed by the New York State Nurses Association sought to install minimum nurse-to-patient ratios for different clinical settings, such as one nurse for every three patients in an emergency room or one nurse for every five patients in a residential health care facility. But these past proposals faced strong opposition from industry groups representing hospitals and nursing homes.

To increase the chances of passing a new measure, lawmakers created separate bills for each of these care settings. The nursing home bill indicates that each facility has to hire enough staff to provide every patient with 3.5 hours of clinical care each day, on average. About a third of that care must come from nurses, while the rest is to be provided by aides.

The hospital bill shifts the focus away from creating a universal standard of care. Under its provisions, the state health commissioner must create staffing regulations for intensive care units and critical care settings—the medical arenas most impacted by COVID-19. Each hospital in the state must also form a committee to establish its staffing standards. New York health officials will then enforce the plans.

“While this legislation will be challenging for hospitals to implement, the hospital community is committed to its success,” the Greater New York Hospital Association said in a statement expressing support for the bill before Tuesday’s vote. The group thanked the bill sponsors for “helping to break a longstanding impasse on staffing legislation.”

Asked whether the committee model was a concession just to get something through, Democratic State Senator Gustavo Rivera, the primary sponsor of both bills in his chamber, said it is “an absolutely workable model” that accommodates the varying needs of hospitals throughout the state.

With the support of hospitals, New York could also implement this committee plan faster than past mandates seen elsewhere. Labor leaders speaking Tuesday at a press conference about the bills noted that California, the only state that currently has universal staffing ratios for hospitals, took years to develop and implement those standards. Legal challenges also held them up.

“[New York’s] bill provides the tools for frontline staff to effectively enforce their rights on the job, and that is key,” said Rebecca Miller, deputy legislative and political director for CWA District 1.

While unions representing health care workers also celebrated the passage of the nursing home bill, other stakeholders were less thrilled.

Nursing home groups told WNYC/Gothamist that complying with the regulations could cost facilities $260 million a year. The state budget includes $32 million to implement nursing home reforms in the coming fiscal year, with the expectation that the federal government will match that amount.

Clyne noted that the new state budget already includes a measure requiring nursing homes to spend at least 70% of revenue on direct patient care, which he said was more reasonable than minimum staffing requirements.

Much of the nursing home care in New York is paid for by Medicaid, and the state determines the rates that the program pays health care providers. Those rates often fall short of the cost of care. Nursing home groups argued against staffing requirements in the past, saying they already struggled to recruit and retain staff.

Patient care advocates said the bill is a step in the right direction but criticized it for requiring too few hours of direct care and placing too much emphasis on aides rather than nurses, who have more medical training.

The bill includes several mitigating circumstances under which nursing homes would not face penalties for violations—something Richard Mollot, executive director of the state’s Long Term Care Community Coalition, says will prevent them from being held accountable.

“We’re chewing gum, juggling and running a marathon at the same time,” Rivera said. “If anyone can do it, New York can.”

If Governor Andrew Cuomo signs the bills, they will take effect in January.