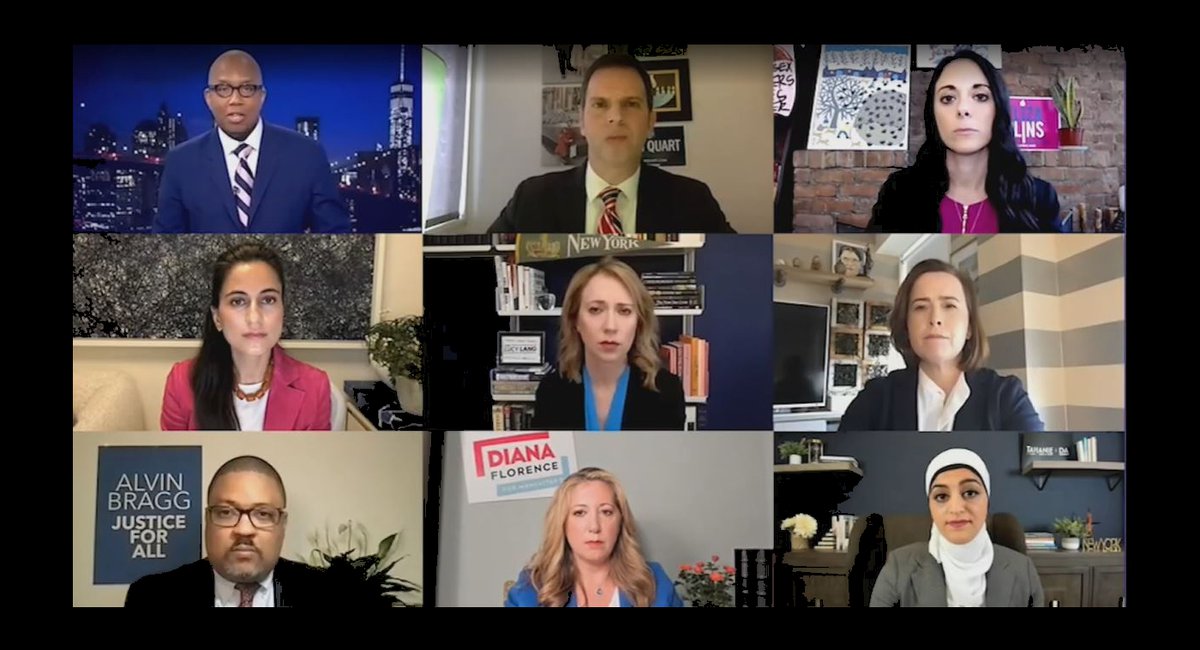 Eight candidates vying for the post of Manhattan District Attorney sparred in their first televised debate on Tuesday, offering voters the sharpest contrast to date between the candidates emphasizing decarceration and those who would bring a more centrist approach to one of the top law enforcement offices in the country.

As the city grapples with a disturbing spike in shootings and hate crimes, as well as pressure to take more strides towards criminal justice reform, Manhattan voters have a lot to consider before early voting begins on June 12th. Eight candidates will be on the ballot for the Democratic nomination in the following order: Diana Florence, Eliza Orlins, Elizabeth Crotty, Tali Farhadian Weinstein, Dan Quart, Tahanie Aboushi, Alvin Bragg and Lucy Lang.

The candidates, whose previous interactions have been largely limited to online Zoom forums with no opportunity to speak to one another, wasted no time going on the offensive at the debate, with former federal prosecutor Tali Farhadian Weinstein taking a swing at Alvin Bragg, another former federal prosecutor. Bragg, who’s received the backing of his old boss Preet Bharara, former U.S. Attorney for New York’s Southern District, said he’d only prosecuted one misdemeanor — a case where men were blocking people from going into a Planned Parenthood.

“I think it’s very weird to say that you should run this office because you’ve only ever prosecuted one misdemeanor,” Farhadian Weinstein said. She is running a more centrist campaign, emphasizing gun prosecutions and a clamp down on gender-based violence, and has the backing of Eric Holder, who led the Justice Department under President Barack Obama. “Strangling your wife is a misdemeanor. Breaking into a synagogue and vandalizing is a misdemeanor.”

That tension emerged again and again over the course of the evening, particularly around issues of hate crimes and gun violence. Liz Crotty, a criminal defense attorney who worked for former Manhattan District Attorney Robert Morgenthau, is the most conservative candidate running as a Democrat, and the only person not describing herself as a progressive. When asked how she thought cases of illegal gun possession should be answered, she answered flat out, “You should be afraid that if you are doing so, you will be going to jail.”

Public defender Eliza Orlins pushed back vociferously. She’s the most left-leaning candidate in the race, campaigning around decriminalizing sex work, declining to prosecute almost all misdemeanor cases, and defunding the DA’s office itself. In her retort, she evoked a 16-year-old client charged with gun possession, who the Manhattan DA wanted to send to jail. A judge allowed her client to participate in a diversion program instead, she said.

“She’s [been] gainfully employed for the last decade. She’s engaged. She has a baby on the way,” Orlins said. “That goes to show what we can do when we don’t just default to incarceration on cases, even those involving gun possession.”

Read more: What Will the Next Manhattan District Attorney Refuse to Prosecute?

Several candidates used their opportunity to cross-examine and needle Farhadian Weinstein about her big donors on Wall Street. Farhadian Weinstein, whose husband is the founder of the $3 billion dollar hedge fund Saba Capital Management, has accrued the largest pot of donations with at least 21 donors giving more than $30,000, according to records through January. She accused her rival candidates of “putting forward purity tests” and criticizing her for their own shortcomings.

“In the end, everyone’s taken the same approach,” she said. “I’ve been more successful.”

Tahanie Aboushi, a civil-rights attorney who has received the backing of progressive groups like the Working Families Party, pressed Farhadian Weinstein on whether she’d recuse herself if a case against her husband came up, or any of her other large donors; she said she’d only bow out if her husband was involved.

“I will prosecute anyone who breaks the law, including my donors,” she said.

“So is that a no? You will not recuse yourself,” Aboushi prodded.

Farhadian Weinstein cross-examined Aboushi as well, about her decision never to prosecute aggravated harassment in the second degree, a statute that can be used to prosecute hate crimes perpetrators where the person “strikes, shoves, kicks,” someone because of a person’s race, gender, origin, religious affiliation or sexual orientation. Aboushi has a lengthy and specific list of crimes she’d decline to prosecute if elected.

“But Tahanie, if somebody shoves an elder, you’re not gonna charge it, you’re just gonna talk about getting at the root causes next time?” Farhadian Weinstein asked. Aboushi shot back, saying, “We can look at restorative justice measures. That’s not something we just look away and do nothing about.”

A lightning round revealed just one candidate, State Assemblymember Dan Quart, had been previously charged with a crime. “Twenty some-odd years ago, marijuana possession,” Quart said, adding the case was eventually dismissed. Quart later tweeted he’d been at a Phish concert at Jones Beach in 1995, where an undercover officer handcuffed him. He said he’d tried to defend himself in court as a law student at the time but eventually spent $600 dollars to hire one, who secured the case’s dismissal.

“This was an enormous waste of time and money,” Quart tweeted, who has emphasized his record working towards bail and police reform in the state legislature. “At the end of the day, the punishment for so many folks is just being in the system.”

1) This was an enormous waste of time and money. At the end of the day, the punishment for so many folks is just being in the system. It’s not just about incarceration, it’s also about missing two days of work to be in court, it’s about finding the $600 for a lawyer. 5/

There’s been very limited polling in the race for Manhattan DA and, unlike most elected offices up for grabs this primary season, ranked-choice voting does not apply because this is a county-level seat governed by state election law. This means voters must select one favorite candidate.

Unlike city offices, there are no term-limits on the role of district attorney. The borough has had just two DAs in more than four decades: Robert Morgenthau, who held the post from 1975 to 2009, and Cyrus Vance, who worked under Morgenthau and received his endorsement; he has been at the helm of the office ever since.

Vance is not seeking re-election at the end of his term this year. Whomever primary voters select on June 22nd could hold the post for a generation, although at the Tuesday night’s debate most said they would seek two or three terms before bowing out.

Read on for more theatre news you may have missed in today’s headlines. Darren Criss Will Head…