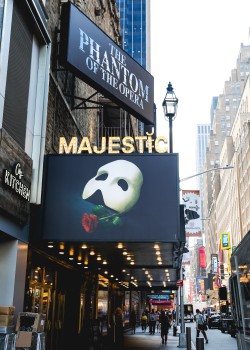 The chandelier will rise (and crash) once again at the Majestic Theatre, with The Phantom of the Opera slated to resume Broadway performances October 22. The Andrew Lloyd Webber musical, the longest-running production in Broadway history, had played over 13,300 regular shows before the COVID-19 shutdown. Tickets will go on sale May 7 at 9 AM ET.

The schedule announcement came hours after New York Governor Andrew Cuomo stated that he expects certain Broadway shows to reopen at full capacity as soon as September 14. No productions have yet confirmed intentions to return on that date.

While some new shows, like Diana (which had played less than 10 previews prior to the shudtown) and the upcoming revival of The Music Man, have announced December returns, The Phantom of the Opera is the first show that was already open on Broadway to share a reopening date—and, incidentally, currently situated as the first show to welcome back audiences.

During the shutdown, the musical remained in the headlines thanks to a Japanese production that saw its director leading the way over Zoom from halfway across the world. A limited series adaptation of the source material, the novel of the same title by Gaston Leroux novel, was also announced last June.The Phantom of the Opera fans (phans) were also able to experience virtual reunions, streaming presentations, and casting notices.

While CDC and state guideliens may change between now and October, the production anticipates that audiences will be allowed to return at full capacity, but will be required to wear masks (aptly enough, considering the title character’s signature look) and provide vaccination or negative test verification. Phantom also confirmed a return policy that will likely be much more common moving forward than prior to the pandemic: patrons can exchange or refund tickets up until two hours before curtain. As stipulated by the Broadway League shortly after Cuomo’s May 5 press conference, details of the reopenings will ultimately depend on the state government’s final approval of theatre operators’ health and safety protocols.

Directed by the late Hal Prince, The Phantom of the Opera has music by Lloyd Webber, lyrics by Charles Hart (with additional lyrics by Richard Stilgoe), and a book by Stilgoe and Lloyd Webber. The production also features musical staging and choreography by Gillian Lynne, scenic and costume design by Maria Björnson, lighting design by Andrew Bridge, and sound design by Martin Levan with David Caddick as music director. Cameron Mackintosh and Lloyd Webber’s The Really Useful Group serve as producers.

Across the pond, The Phantom of the Opera will reopen in July at Her Majesty’s Theatre with a 50 percent reduction in the orchestra. A spokesperson for the Broadway production says it remains committed to returning with a full pit.

Casting for the Broadway return will be confirmed later.