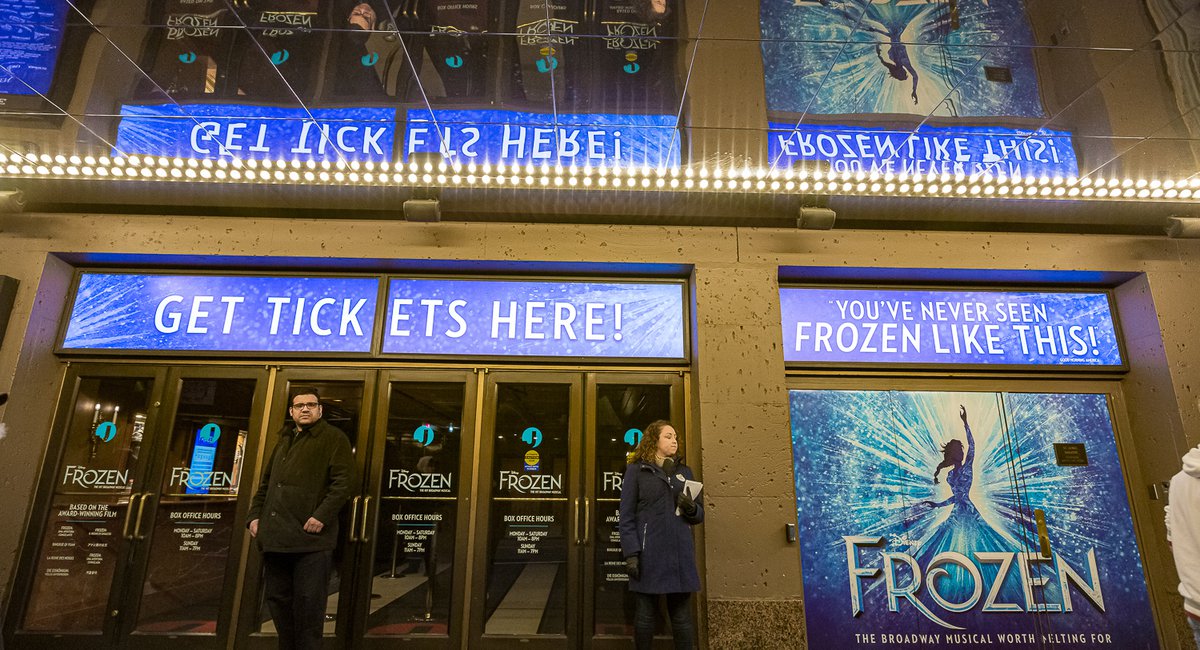 In addition to some big baseball stadium news, Governor Andrew Cuomo also announced on Wednesday that The Great White Way is finally coming back. Broadway has set the date of September 14th as their official reopening. Tickets, which can go on sale as soon as May 6th (that’s tomorrow, yup), will be made available at 100% theater capacity.

“On behalf of the nearly 100,000 people who make their living on Broadway—on stage, backstage, and throughout the city and state—we are immensely gratified by the support of Governor Cuomo today,” said Broadway League President Charlotte St. Martin. “Restarting Broadway is a complex endeavor, requiring long lead times for productions the need to reconnect with a sustaining audience from across the country and around the world… Broadway is the beating heart of NYC tourism and we can’t wait for the day soon when our hearts will beat before a live joyful audience.”

If you are having questions about how this is going to work—if there are going to be mask requirements, if you need to have proof of vaccination or a recent COVID negative test, etc—you’re going to have to wait a bit longer. The rest of the details about Broadway’s reopening will be subject to whatever health restrictions and rules are in place come September.

State budget director Robert Mujica said during today’s press conference that the reason shows are putting their tickets on sale now, despite a lack of details, is to see what the appetite is among the public for sitting in a typically cramped Broadway theater.

“Broadway can’t function with reduced capacity, they need to be at a much higher level of capacity,” he said. “Having the tickets go on sale now, they can start to gauge how many people are interested, what they’re interested in, and make adjustments as you get to September’s staged openings.”

He added that between now and September, there will be pilots for indoor programs, during which they will increase the amount of capacity in a theater.

So people starved for Broadway performances over the last year will have to make a careful calculus in weighing whether to get tickets this far in advance. Is it better to buy tickets while they’re available immediately and bank on things staying the same—or getting better in four months—but risk that the shows might be cancelled again, or should you wait to avoid the initial September rush and wait to see what rules theaters will have in place for theatergoers and performers, and also see what the city COVID situation is? In other words: If you’ve waited this long to finally see Hamilton, can you find it within yourself to wait a few months more to do so?

Cuomo noted that while he was not legally allowed to require that everyone get vaccinated, businesses could require it if they chose to do so. And he personally is in favor that, because surveys have shown that people are more comfortable going to a show knowing everyone around them is vaccinated.

“You cannot mandate a vaccine approved under an EUA [emergency use authorization],” Cuomo said. “On Broadway, I said September is a long way away, they will have to make a market decision because they need a high capacity.”

“A theater can say, this is who I allow in my theater,” he added. “I can’t legally mandate that people take the vaccine.”

READ MORE: A Year On, Broadway Is Hopeful — But Reopening Is Still Months Off

There were 31 shows in production, including eight new shows in previews, when Broadway shut down in March 2020. Some of those, including the Disney musical Frozen, a new Martin McDonagh play called Hangmen, and a revival of Edward Albee’s Who’s Afraid of Virginia Woolf, have announced that they will not reopen. Another casualty of the shutdown was Bob Dylan’s Girl From North Country, which opened on March 5, 2020 and shut down after a week.

The Tony-nominated musical Moulin Rouge! is expected to return, though without star Karen Olivo. Others that have announced new start dates—including Tracy Letts’ The Minutes (March 15th, 2022) and The Music Man starring Hugh Jackman and Sutton Foster (Feb 10th, 2022)—may choose to move those dates forward.

The Times notes that at least three of Broadway’s largest productions—Hamilton, The Lion King and Wicked—are planning to make a joint announcement next week saying that they will reopen in mid-September. Other shows expected to return early on in the fall include Chicago, David Byrne’s American Utopia, Disney’s Aladdin, and Come From Away. (The Tony Awards for the 2019-2020 have been indefinitely postponed since last year, as the show is waiting for Broadway to come back as well.)

The Times adds that the Broadway League and several labor unions have been “talking about the possibility of opening with fewer than the customary eight shows a week” initially.

Broadway has gone dark before, but never for this long a period of time. After September 11th, theaters were shut for 48 hours before reopening. In 2007, there was an 18-day stagehands strike against the Shubert, Jujamcyn, and Nederlander Theaters, and in 2003 there was a four-day Broadway musicians strike that impacted many musicals.

Early in March last year, the industry was initially reluctant to shutter both because of a desire to keep people employed with their productions, and also because if a Broadway production cancels voluntarily, it will not receive insurance coverage for loss of income. Once there was a government mandate to close, losses incurred after two closed shows were covered.

Prior to the pandemic, almost 250,000 people were seeing a Broadway show every week, and Broadway drew about $1.8 billion on tickets in 2019. It’s been estimated that the industry lost well over $100 million during the pandemic.

To help jump start the industry, the state budget includes the New York City Musical and Theatrical Production Tax Credit Program which provides up to $100 million in tax credits; productions which have their first performance scheduled through December 2022 are eligible for a 25 percent credit on eligible costs.

In her Broadway WELLness Playbill Experience, Kate Lumpkin explores the secrets of how Broadway arti…

Amid a surge in hate crimes and violence against Asian Americans, New York students, parents, and la…