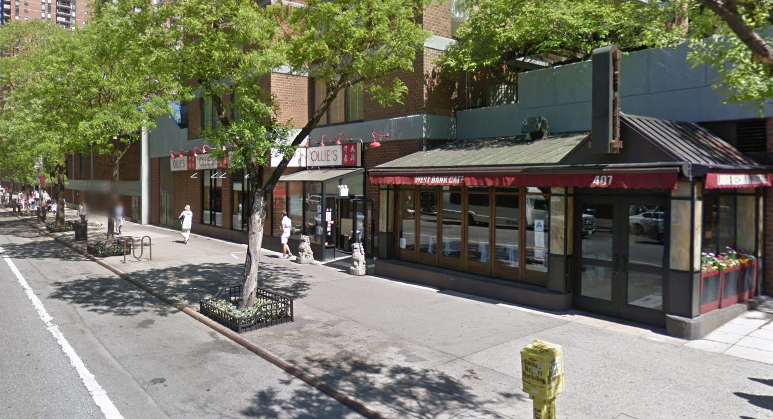 A 31-year-old Asian woman walking in Hell’s Kitchen in Manhattan was struck by a person wielding a hammer on Sunday night, and police say the NYPD’s Hate Crime Task Force is investigating the incident.

The incident occurred just after 8:30 p.m. on May 2nd. According to the NYPD, the 31-year-old woman and another woman, 29, were walking on the sidewalk near 411 West 42nd Street—close to Ninth Avenue—when a person approached them and told them to take off their masks. Then, police say, the person hit the 31-year-old in the head with a hammer before fleeing the scene.

The victim, who identified herself as Theresa to WABC 7, said the assailant “was talking to herself, like talking to a wall, I thought maybe she was drunk or something, so we just wanted to pass through her quickly and when I passed through her, she saw us and said ‘Take off your f—ing mask,’ which is shocking. Suddenly I felt my head get hit by something.”

Theresa dropped a bottle of wine that she had been carrying on the sidewalk when she was struck. She was taken to NYU Medical Center and received seven stitches to close the laceration on her head.

Steve Olsen, who owns the West Bank Cafe on the street, witnessed the attack and said his customers rushed to her aid: “There was blood all over the place.”

EXCLUSIVE: “Take off your f****ing mask!” Then she was hit with a hammer. 31YO woman’s mother didn’t want her here bc of the anti-Asian attacks. She walked her friend to the subway bc of the attacks. That’s when she became the latest victim. H/T @Syissle @LucyYang7 #stopasianhate pic.twitter.com/wrSEZh8BSo

Governor Andrew Cuomo ordered the state’s Hate Crimes Task Force to also assist the NYPD. “I am disgusted by this violent attack in Midtown Manhattan, the latest seemingly senseless and despicable hate crime against Asian Americans in this state,” he said in a statement. “We will do everything in our power to protect those who are vulnerable to these attacks and to hold cowardly perpetrators accountable to the full extent of the law.”

Attacks targeting Asians have increased since the start of the pandemic. According to the NYPD’s Hate Crimes Dashboard, 35 of the 57 hate crime incidents in March have targeted Asian victims. Late last month, a 61-year-old man collecting cans in East Harlem was brutally kicked in an alleged hate crime assault; the victim remains in a medically-induced coma.

Theresa told WABC 7 that she had been in Taiwan with her family during the pandemic, but returned last month. “My mom actually told me please be careful, there’s a lot of Asian crime happening in America,” she said.

The Drama Book Shop will reopen to the public June 10 at its previously announced home: 266 West 39t…

Rev. Al Sharpton told reporters Tuesday night that he will endorse a candidate for mayor two weeks b…