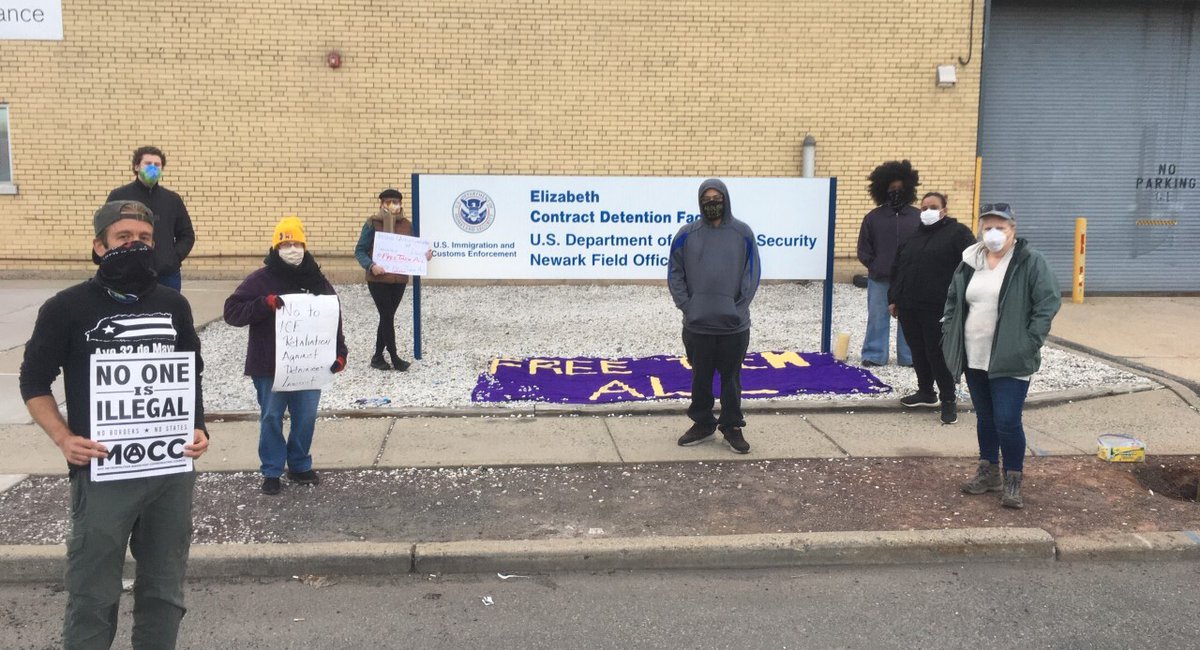 The owners of a windowless former warehouse that houses Immigration and Customs Enforcement detainees in New Jersey are alleging dangerous conditions at the facility and suing to terminate its lease, representing another potential victory for activists seeking the end of controversial immigration detention in the state.

The lawsuit filed Monday alleges that CoreCivic, the private prison operator that leases the facility and contracts with ICE to hold about 145 asylum seekers and other undocumented immigrants, breached its contract by failing to follow local and federal safety regulations to stop the spread of Covid. The Elizabeth Detention Center has had more Covid cases than other ICE facilities in the region, and both security and medical employees have died. One dozen detainees newly tested positive at the end of April, just as cases statewide were dropping.

The lawsuit comes days after Democratic officials in Essex County announced they would stop housing ICE detainees by August. Democratic leaders in Hudson County, which likewise holds ICE detainees at its county jail, also signaled they might cancel their new 10-year contract with ICE. Meanwhile, the sheriff in Bergen County said last week that jail is no longer admitting additional ICE detainees.

Anti-ICE activists were thrilled at the news, which we first broke on-air on WNYC on Monday. They have long held protests, prayer services, and 24-hour vigils at the facility. Scores of people have been arrested outside for engaging in civil unrest. When congressional representatives toured the facility in 2019, they framed it as a symbol of Trump Administration immigration abuses.

The suit was filed in Union County by Portview Properties, which is affiliated with Elberon Development Group. Elberon and its politically connected owner, Anne Evans Estabrook, and her son, Dave Gibbons, had been targeted by activists through their philanthropic endeavors. Both serve on boards at Kean University, and Estabrook is on the board of the New Jersey Performing Arts Center in Newark.

Last year, Elberon publicly announced that it was seeking to cut ties with CoreCivic. But CoreCivic, the largest private prison operator in the country, refused to end the arrangement and told investors it would stay until its lease expired, in 2027. Now, in the lawsuit, Elberon documents how CoreCivic mishandled Covid protocols, arguing that its failure to implement safety measures required by the Centers for Disease Control means that it breached its contract with ICE “and, therefore, its lease agreement.” It notes that 51 detainees have contracted Covid at the facility, according to ICE data.

The lawsuit reads: “Given the grave concerns expressed by those individuals who have experienced first-hand the dangerous conditions within the EDC, Plaintiff demanded assurances from Defendant that it is operating the EDC in accordance with its contractual obligation to adhere to and implement federal COVD-19 safety guidelines, regulations and requirements. In response, Defendant offered only a naked statement that it is in compliance with its obligations under the ICE Contract.”

Former and current detainees described a facility that was not meant for people to live in for months, let alone years. Birds that fly around the interior allegedly defecate on detainees’ beds, and people with medical problems are abused by staff. Women said they were not provided sanitary pads.

Edafe Okporo, a public health and gay rights activist who was detained at Elizabeth after fleeing Nigeria in 2016, said he wished the detention center could be turned into housing for asylum seekers. “The news of a potential possibility of closing the center came with a relief that no one would have to go through the horrible system as I did,” said Okporo, who now runs a shelter for asylum seekers in New York City. “It’s coming late, but slow progress is better than no progress.”

The male and female immigrants at Elizabeth are held in crowded dormitory-like settings, not in cells, with one bathroom for 40 people. They are often transported from local airports after they landed and declared asylum, saying their lives were threatened due to persecution in their home countries. As has been common federal practice since the 1990s, while they await immigration court hearings on their claims, they are locked up, sometimes for years.

During the Covid-19 pandemic, conditions at Elizabeth worsened, and detainees held hunger strikes to protest. Immigration attorneys filed a class-action lawsuit demanding that detainees at the facility be released. One plaintiff in that suit who was held at the facility claimed that detainees had to buy their own soap, and alleged that their mandated prison uniforms that they wear daily were only cleaned once every two weeks because the detainees who work in the laundry room contracted Covid. Another plaintiff was immediately deported.

ICE referred questions to CoreCivic. A spokesman there said the company doesn’t comment on lawsuits, but “the safety and well-being of these individuals and our staff is our top priority.” The publicly traded company has previously been accused of human-rights abuses inside its other facilities. Last year, WNYC’s The Takeaway and The Intercept reported that CoreCivic officers in Georgia bragged on social media about pepper-spraying detainees who had protested for medical attention and better food.

Elberon Development first signed the lease with CoreCivic in 1993, when the federal government locked up far fewer immigrants for far shorter periods of time.

The contract was controversial from the start. In 1995 detainees rioted and attempted to take over the facility, even holding officers hostage. Immigrants then made the same allegations about the facility that continue to this day, about inedible food, lack of fresh air, bugs and vermin, no opportunity to exercise, and crowded sleeping quarters.

Watch: How the Geffen Stayhouse Built a Suite of Successful Theatre Online