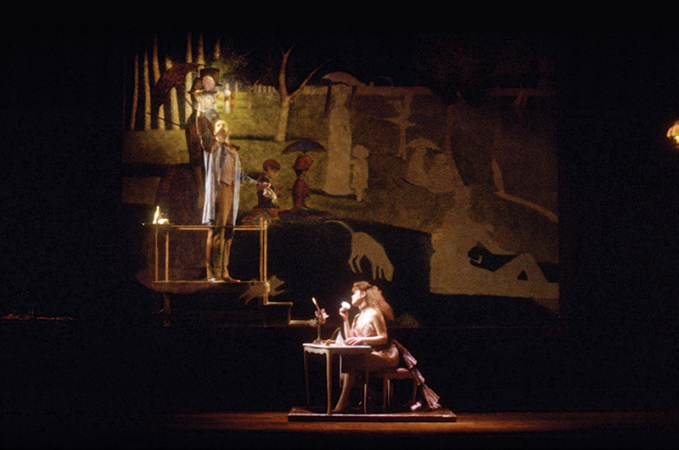 Stephen Sondheim and James Lapine’s Pulitzer Prize-winning musical Sunday in the Park with George opened at the Booth Theatre May 2, 1984. The production, starring Tony Award winners Mandy Patinkin and Bernadette Peters, played 35 previews and 604 performances before closing on October 13, 1985. The musical was nominated for 10 Tony Awards, including Best Actor and Actress nominations for Patinkin and Peters.

Sunday in the Park with George tells the story of painter Georges Seurat in the months leading up to the completion of his most famous painting, A Sunday Afternoon on the Island of La Grande Jatte. Consumed by his need to “finish the hat,” Seurat alienates the French bourgeoisie, spurns his fellow artists, and neglects his lover Dot, not realizing that his actions will reverberate over the next 100 years.

Sunday in the Park with George was most recently revived at the Hudson Theatre in 2017, starring Jake Gyllenhaal and Annaleigh Ashford in a limited engagement from February 11 through April 23.

Read on for some recent theatre headlines you may have missed in today’s news. Donja R. Love W…

In response to the recent attacks against the AAPI communities across the nation, Jonathan Lee creat…