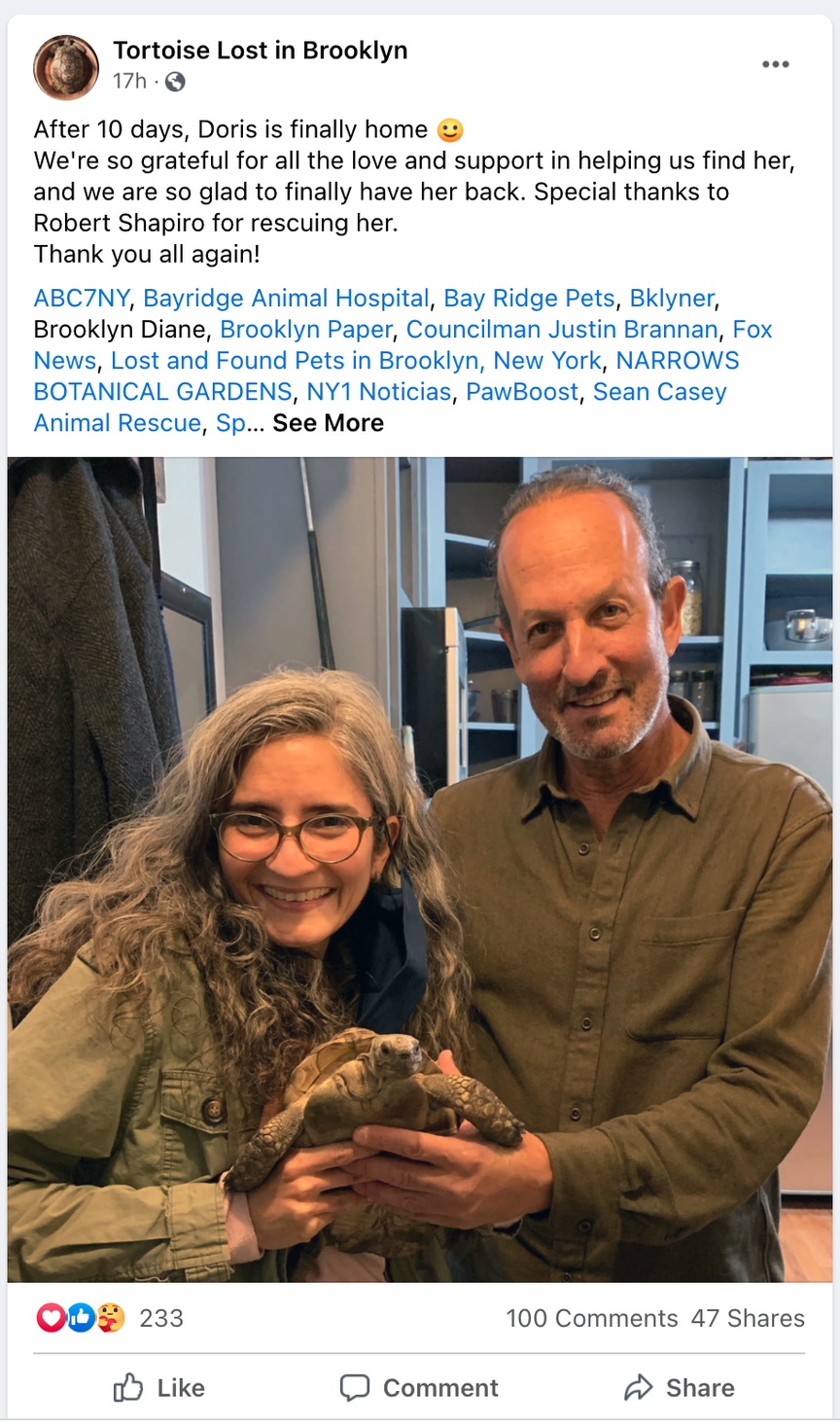 The separate misadventures of a pet tortoise and flock of lambs came to an end on Friday, with authorities corralling the animals and bringing them to sanctuary safe and sound.

The case of “Doris” the tortoise began ten days ago after the four-legged African Leopard Tortoise split from her Bay Ridge home after the gate had been left open. The owner, Laura Torres, organized neighborhood search groups and posted a reward for the return of the animal. A Facebook page dubbed “Tortoise Lost in Brooklyn” was also created. The hard-shell animal somehow lumbered her way to Staten Island (by swimming or crossing the Verrazano Bridge is anyone’s guess), surviving all those days on who knows what.

The Brooklyn Paper reported that Doris was found on Staten Island by a Staten Island resident who called the local zoo thinking it had escaped from there. Zoo workers were then able to reunite Doris with Torres.

“After 10 days, Doris is finally home,” the family wrote on their Facebook page. “We’re so grateful for all the love and support in helping us find her, and we are so glad to finally have her back.”

On the same day Doris was back home safe and sound, elsewhere in Brooklyn, eight young sheep were discovered in a backyard in Marine Park. The homeowner called the 63rd Precinct, which covers south Brooklyn near the Gateway National Recreation Area, who then brought in the NYPD’s Special Operations unit.

Only in New York! This afternoon a Brooklyn homeowner called 911 after discovering a flock of sheep in his rear yard. #NYPD ESU safely wrangled them up and with the assistance of the Mounted Unit the 8 uninjured sheep were transported @NYCACC in Brooklyn. pic.twitter.com/7wr5Ro7cx3

Pictures posted on the special ops Twitter page shows officers corralling the fluffy younglings in a narrow alleyway and putting them in a small trailer with an assist from Animal Care Centers and the NYPD Mounted Unit.

The ACC posted a tweet saying the lambs are “safe” and on their way to Skylands Sanctuary & Animal Rescue in Wantage, NJ, about an hour’s drive from New York City. Authorities still don’t know exactly where the sheep originated from.

There are definitely a certain flock of lambs that are celebrating #FeelGoodFriday! This morning a Brooklyn man awoke to 8 sheep grazing in his backyard. He immediately called @NYPD63Pct who with the help of ESU and the Mounted Police Unit brought them to ACC. pic.twitter.com/wCbQte9UMH

The tortoise and little lambs could not be reached for comment.

1929 Birthday of Broadway composer Cy Coleman, whose scores for shows like Sweet Charity, I Love My …