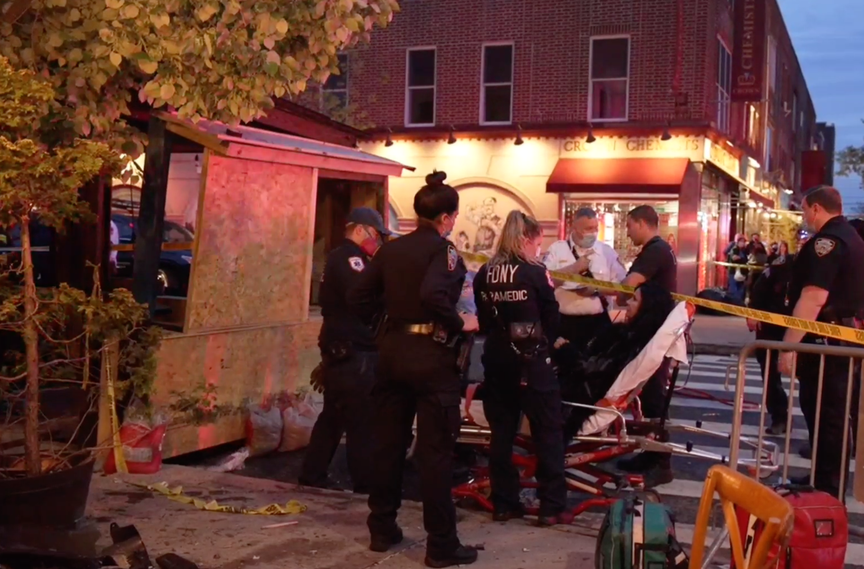 A Queens man riding his scooter was killed by an out-of-control driver who later crashed into several parked cars before colliding with an outdoor dining set up in Astoria, according to police.

The victim, Xing Long Lin, 37, died after a 60-year-old woman driving a 2013 Mercedes-Benz C-300 hit him from behind on Thursday just before 8 p.m., according to police. The driver, who was reportedly upset with a slow driver in front of her on 35th Street near Ditmars Boulevard, then plows into a 2017 Dodge Challenger and 2020 Subaru WRX before colliding into an outdoor dining set-up at Rosatoro Restaurant. The exterior of the restaurant found at the corner of Ditmars Boulevard and 35th Street was also damaged.

The Post reports that the delivery person was dragged under the driver’s car. One witness said the man had been trapped under the car, “We tried to get to him. His face was just full of blood. It was bad.”

Debris from the damaged outdoor dining set up injured a 32-year-old diner inside the Peruvian eatery. She was later hospitalized at NYC Health & Hospitals/Elmhurst with what police say was “trauma to both legs.”

Owners of the restaurant expressed sadness over the incident and for Lin, whom they described as a delivery person. The police have not confirmed that whether Lin is a delivery worker.

“Our team is shaken, but physically okay,” a statement from the restaurant read. “As much as we are heartbroken about our restaurant, structures can be repaired while people cannot.”

UPDATE: Cops released name of man who died in crash yesterday as 37yo Xing Lin

Cops say a woman got angry while driving behind a slow car in Astoria. She lost control of car when going around it & crashed into Lin who was on a scooter. She then hit into outdoor dining structure pic.twitter.com/iBrk8wuJzB

The police have not charged the driver yet.

The incident came a few days after the state lifted a curfew for restaurants and bars instituted because of the pandemic. It also came the same day as when the New York City Council voted to keep the Open Streets program, where certain streets are closed to vehicular traffic, permanent.

“On a day where we should be celebrating the success of the Open Streets program, instead we are mourning the loss of another New Yorker killed by traffic violence,” Danny Harris, executive director of Transportation Alternatives.

1887 Birthday of Vernon Castle who, with wife and dancing partner Irene Castle, redefines not just w…

In his new Playbill Experience event, Tails From The Stage, audiences will meet Bill and his cuddly …