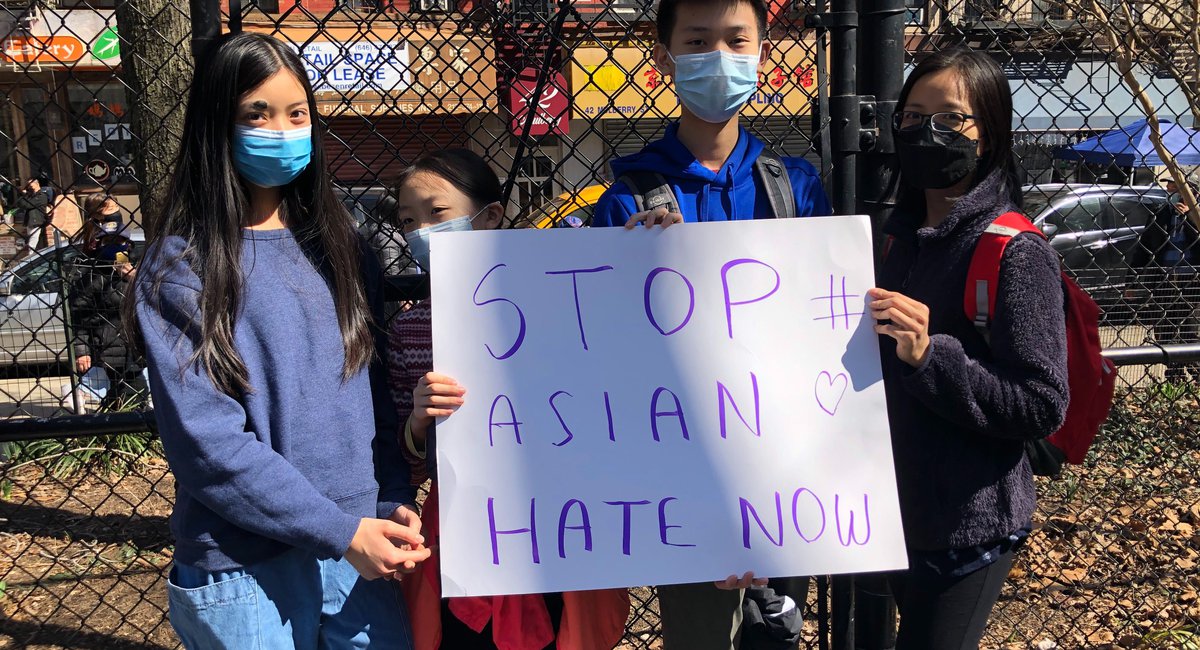 Amid a surge in hate crimes and violence against Asian Americans, New York students, parents, and lawmakers want schools to combat intolerance through education, with an infusion of Asian-American history and culture they say has been glaringly absent so far.

This week, thousands of parents sent a letter to Mayor Bill de Blasio and Schools Chancellor Meisha Porter calling on the education department to ensure lessons across the school system are more inclusive of Asian American experiences and contributions. They also want officials to make Asian American and Pacific Island Heritage Month part of the school calendar with activities to match, and provide students with tools to confront racism in their communities.

“Education is among the best antidotes to racism and must start in the earliest grades,” said the letter, signed by 2,500 parents.

Asian students represent 18% of the public school population, according to the Department of Education’s demographics for the 2019-2020 school year.

Additionally in the letter, dozens of students detailed the dearth of instruction they received in Asian American history, and outlined the searing racism they have experienced at school.

Katherine L., 15, described being ridiculed for the foods she ate for lunch as children raced around during recess making racist comments. “Kids would run around screaming, ‘Chinese, Japanese, I like cheese,’ while pulling back their eyes on the playground,” she wrote.

Parent Xia Li said she’s scanned classroom and hallway walls for images of Asian Americans, and looked for Asian American speakers at events and graduations. “I don’t see them,” she said. “It’s blatant invisibility. … The implicit and explicit message is that Asian Americans are not important. This is very harmful.”

“Everyone is aware of the onslaught of hate and violence against Asian Americans this year,” said State Senator John Liu, who sponsored the bill. “Racism and bigotry are rooted in ignorance and fear, and the ignorance of the Asian American experience, our accomplishments as well as our struggles, only lends force to that ignorance. In order to really eradicate the racism Asian Americans have felt in the long term, we need to do it through education.”

Liu, who graduated from Bronx High School of Science in the 1980s, said he remembers only one paragraph about Asian Americans in his history books. “That was the building of the transcontinental railroad, and that’s it. It’s clear not that much has changed,” he said. “This is not new, but it has become much more relevant and urgent with the attacks and killings of Asian Americans in the recent past.”

Activists have been demanding the city’s education department overhaul its curriculum to increase representation of people of color for years. Former Chancellor Richard Carranza took steps in that direction, by adding more authors of color to the city’s book lists and adopting a definition for a “cultural responsive and sustaining education” that was supposed to serve as a framework for more improvements. Current Chancellor Porter has said repeatedly that building a more inclusive education is a top priority.

“The DOE produces and provides high-quality, culturally responsive curricula and resources for schools, and this letter underscores the importance of that work,” said department spokesperson Sarah Cassanovas. “We remain committed to making sure our Asian American and Pacific Islander students see themselves and their peers in the books they read and the lessons they learn.”

Officials said specific curricula used by schools — including Passport to Social Studies, Civics for All, and Hidden Voices — highlight Asian American history and experiences. “In addition, we have developed resources for schools to support classroom discussions on anti-Asian bias, racism, and hate crimes,” they said. “We continue to strengthen the representation found in our curriculum.”

Some Asian American parents who were critical of former Chancellor Carranza for his stances on admissions for specialized schools and gifted and talented programs were also skeptical of the city’s efforts to diversify curricula, and that skepticism intensified when officials failed to provide Mandarin interpreters at a meeting to formalize the definition of culturally responsive education.

Meanwhile, the education department also gives schools a lot of latitude over which curricula they use, so it’s hard to identify whether the broad goals of making lessons more culturally responsive filter down to classrooms.

In 2016, Lunar New Year was added as a day off on the school calendar, and some classrooms use the 16-day holiday to amplify the many Asian cultures that celebrate it.

“In my opinion, it really depends on the teachers to push Asian American history, alongside all the other things we’re teaching,” said Annie Tan, a special education teacher in Brooklyn.

She said some teachers may feel timid or uncomfortable because they “are afraid that they will talk about the topic in an insensitive or uninformed way, so it’s really on teachers to unfortunately get the resources needed.”

Tan said she has had to proactively seek out more resources, both to augment city-provided materials and to fill gaps in her own education. “I personally only saw the Chinese Exclusion Act, the Vietnam War, and Japanese internment imprisonment camps in AP U.S. History classes. I don’t know much [of the history] and I’m Asian American.”

In 2019, the New York City Coalition for Educational Justice published a report on the absence of people of color in public schools’ curricula and books. “It’s really, really low,” said coalition director Natasha Capers. “It’s sad because 85% of NYC public school students identify as Black, Latino or Asian and most of the authors of the books that are on book lists and curriculum itself are written by white authors.” Her group found that more than 80 % of books used in pre-k through eighth grade were written by white authors.

Capers said the survey confirmed the lack of Asian American history or authors in city schools. “There’s very little in the curriculum about Asian immigration or about anti-Asian policies that have been enacted in the United States,” she said. “In terms of heroes and holidays, there’s very little about the contributions of Asian Americans in the United States.”

She said her group has sought to increase representation of all people of color. The group is calling on the mayor to invest $1 billion in stimulus money to develop more materials and train teachers. “Often it’s something that’s misconstrued about Black students or Latinx students. That’s not true,” she said. “What Asian parents are calling for is exactly in line with what Black and Latinx parents have been calling for years.”

Samantha Tan, 12, goes to a middle school in Queens. She said she was at a robotics competition early this year when she heard students from another team whisper ‘corona’ when she walked by. “I just really want Asian hate to stop, and I want to know about my heritage,” she said.

City Jail Captain, Accused of Standing By During Suicide, Was Disciplined For Failing To Intervene In Prior Incident

A parade of Broadway stars are set for the digital presentation of Amour April 2–4 , presented by Ar…

Scott Stringer, the city comptroller vying to become the next mayor, has unveiled his first $1 milli…