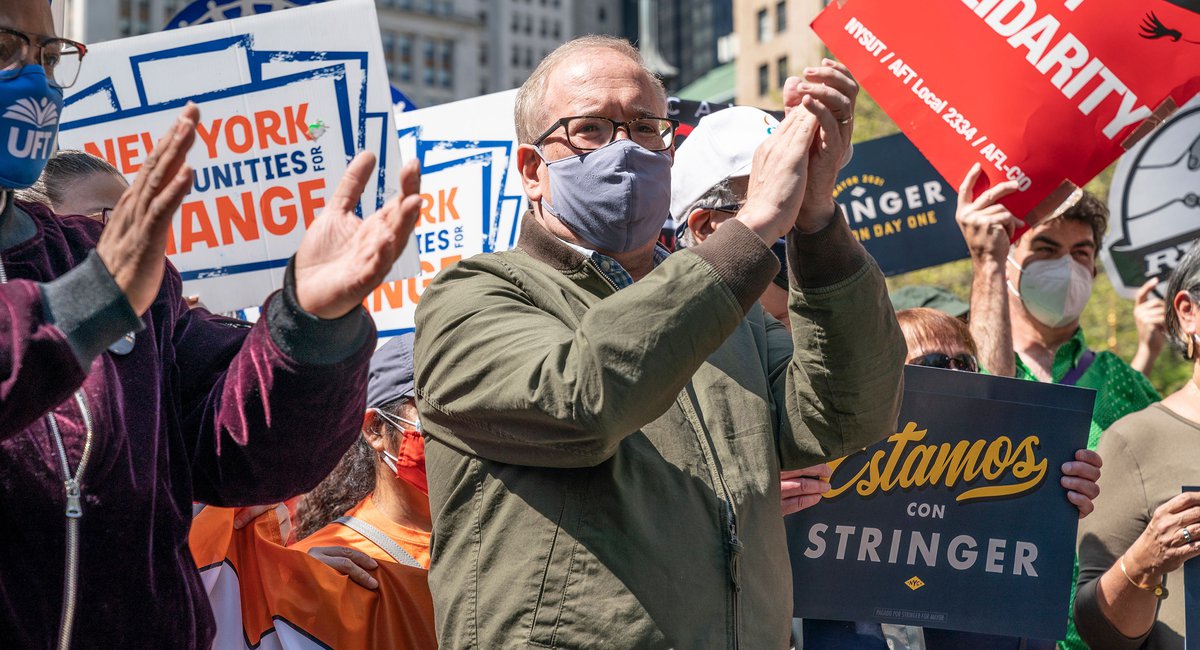 Scott Stringer, the city comptroller vying to become the next mayor, has unveiled his first $1 million television ad that is expected to run for a week on cable, broadcast, and digital platforms beginning on Wednesday.

The timing of the 30-second commercial suggests that Stringer is seeking to capture some momentum after winning several key endorsements from labor unions and progressive interest groups, including the Working Families Party and the United Federation of Teachers. In recent polls, Stringer has trailed two other Democratic candidates: the frontrunner Andrew Yang and Brooklyn borough president, Eric Adams.

Both rivals are reportedly planning to release their own commercials soon. Evan Thies, a spokesperson for Adams, said the campaign has already shot an ad. Yang has also been seen shooting a commercial. He recently released a video on Twitter asking supporters to chip in money for TV ads.

“That’s the only way to change the dynamic of this race,” he said.

Two other candidates who are considered further behind in the field, Ray McGuire and Shaun Donovan, have been running television ads since February. Donovan’s campaign and a super PAC funded largely by his father have spent $4.5 million on television time, the most money for any candidate so far in the mayoral race.

Maya Wiley, another leading contender, has not indicated when their campaign may release a TV ad.

With fewer people watching broadcast television with commercial interruption these days, experts are divided on the importance of political advertising. During the 2013 mayoral election, then-candidate Bill de Blasio released the now famous television ad featuring his son Dante with about a month to go until the primary. By then, his campaign was already viewed as surging.

There are now exactly eight weeks left until the primary on June 22nd. Polls and reporting indicate that a large number of New Yorkers are still largely undecided about the race.

Stringer’s ad focuses on his progressive resume, but with a cheeky tone that targets Yang, who has dominated the social media sphere with his two million Twitter followers and #YangGang base.

The commercial shows Stringer dressed in a suit and carrying a briefcase, appearing to be leaving his apartment on his way to work.

“He’s not a celebrity,” the narrator intones. “He doesn’t govern by tweet or TikTok.”

After checking off a list of causes over Stringer’s three decade career—housing, domestic violence, climate change—the ad wraps up with a nod to Stringer’s traditional persona, which some may view as stodgy and emblematic of the establishment.

“He still wears a suit because it suits him,” the narrator says, while Stringer shrugs at the camera.

In a press release, Stringer said the ad was about showing not only his qualifications but “about being able to share a smile as we start to emerge from the pandemic.”

Hank Sheinkopf, a longtime political consultant, praised the spot, saying it was “a good ad which is meant to make it easier for younger self-identified progressives to vote for a 60-year-old white man.”

But Gerson Borrero, a political commentator for NY1, gave the commercial a thumbs down.

Chris Coffey, one of Yang’s campaign managers, criticized the ad on Twitter.

“Just like his actual voice, his accomplishments are missing from this ad,” he said.

Just like his actual voice, his accomplishments are missing from this ad. Fair question to ask after 30 years in public service: what have you ever accomplished? https://t.co/ZfD3mqfMXE

The tweet from the Yang campaign, which has generally refrained from attacking rivals, was yet another sign that the race is intensifying.

CDC Loosens Mask Guidance For Vaccinated People. Here's What That Means For NY