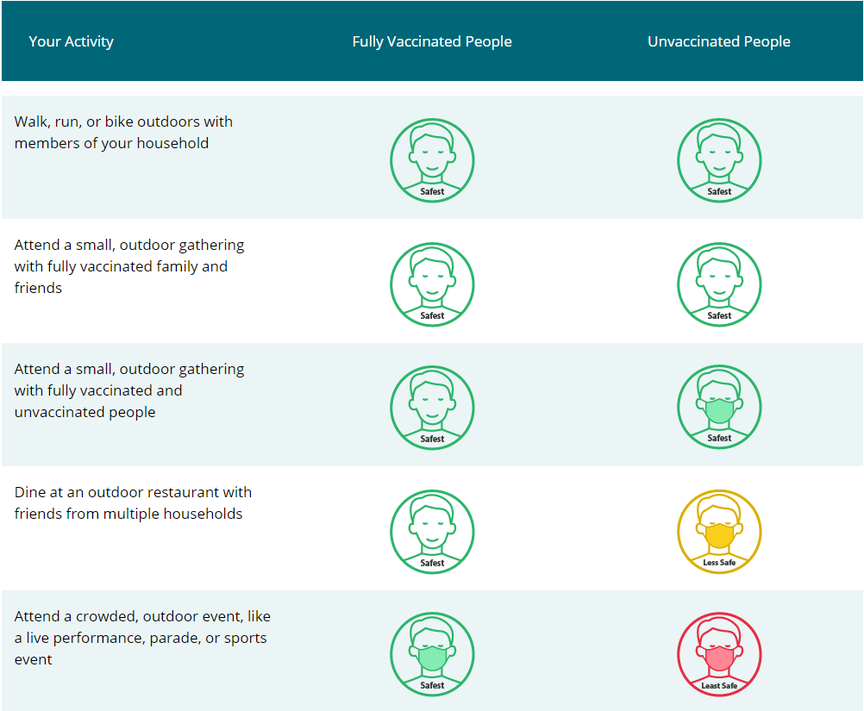 For many New Yorkers, putting a mask on before leaving the house has become second nature by now. But federal health officials announced Tuesday that for those who have been vaccinated, it’s no longer necessary to wear a mask outdoors if you’re attending a small gathering or casually hanging outside.

The new rules do not affect indoor masking, which is still recommended for everyone regardless of their vaccine status.

“Get vaccinated, and if you are, then it’s safe to be outdoors without a mask,” Dr. Rochelle Walensky, director of the Centers for Disease Control and Prevention, said Tuesday during a briefing for the White House COVID-19 Task Force.

She added that states should still take precautions for large outdoor meetups such as concerts and sporting events because “in those settings, when you have that density, we really do worry about protecting the unvaccinated people.”

New York state law currently requires anyone over 2 years old who can “medically tolerate” a face mask to wear one in public when they’re unable to social distance. The city meanwhile advises people to wear a mask “at all times when outside your home and around other people.”

Commenting on the new federal guidance in anticipation of Biden’s announcement Tuesday morning, Mayor Bill de Blasio and city health officials reinforced that it will still be prudent for people to mask outdoors in some situations. “People here learned through the pain we went through to be smart, to be cautious, and we want to keep that instinct alive,” said de Blasio. He noted that New York is one of the most densely populated cities in the world.

Dr. Dave Chokshi, the city health commissioner, added that people who are fully vaccinated should consider wearing a mask outdoors “when there are more people and less ability to maintain distance.”

Gothamist/WNYC reached out to the state Health Department for comment on whether policies will change to align with CDC recommendations and what enforcement of those policies will look like. Governor Andrew Cuomo’s office has the final say on the masking guidance and all COVID policy in the state, and shortly following the CDC announcement, Cuomo said the state would follow the CDC guidelines on masks.

Cuomo cautioned, however, that New Yorkers should not let their guards down against COVID-19, noting that 26 people died yesterday from the virus. “This is still a serious threat,” Cuomo said.

The shift in federal guidance comes as commentators and politicians have stirred up a debate about the ongoing necessity of outdoor masking. A growing body of evidence suggests the risk of transmission outdoors is low. Researchers tracing the source of COVID-19 cases in China found that only one outdoor outbreak involving two cases occurred out of 7,324 identified cases. Ireland health officials recently told The Irish Times that 1 in 1,000 of its COVID cases happened outdoors. While these studies do not rule out outdoor transmission, it shows these events are rare.

Dr. Monica Gandhi, an infectious disease expert who has researched how masks prevent the spread of COVID-19, supports the move to relax outdoor mask mandates. But she said it seems both unnecessary and unwise to distinguish between people who are vaccinated and unvaccinated.

“How can you tell if someone’s vaccinated or unvaccinated?” Gandhi asked. “And unvaccinated people who are against the vaccine are not exactly the people who want to mask. So that’s just going to be very hard to enforce.”

She suggested it would be better to follow guidance released by the World Health Organization in December. It said that people should wear masks in public settings indoors and only do the same outdoors only when they are unable to social distance by at least one meter (3.28 feet).

Linsey Marr, an expert on aerosol transmission of the virus, offered a similar take to The New York Times, laying out a “two-out-of-three rule” when it comes to masking, distancing and being outdoors.

With greater nuance in masking mandates, it may be necessary to remind people to bring their masks with them when they leave the house, just in case, and to wear them when they’re outdoors in a crowd, said Denis Nash, a professor of epidemiology and biostatistics at the CUNY School of Public Health.

“Now is an important time to come up with policies that are very, very clear and do not leave anything open to interpretation,” said Nash. “The basis for any policy needs to be clearly articulated in ways that everyone can understand.”

Asked whether she was concerned that a more complicated mask policy could lead some people to stop wearing masks or taking other necessary precautions, Gandhi insisted it wouldn’t reduce compliance.

“That that kind of slippery slope argument, that Americans don’t understand tiered messaging or that we can’t manage this, I think gives the American public very little credit and is not consistent with how many other countries, including those who are going by WHO guidelines, have messaged to their public,” Gandhi said. “Of all the things to give people credit for, you know when you’re outside.”

This story has been updated to reflect that New York State has now adopted the new CDC mask guidance.

Ahead of several weekend vigils in New York City honoring the lives of eight people, including six A…