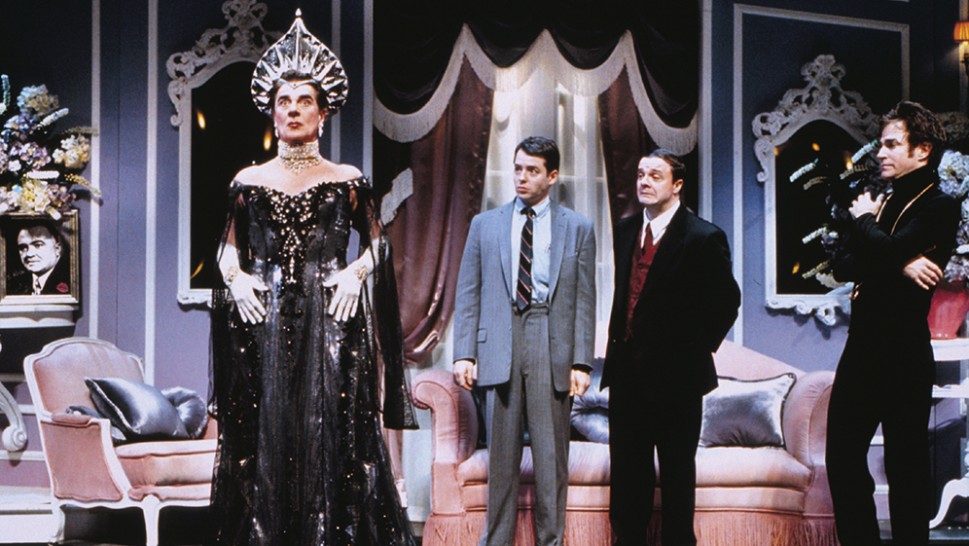 Annie just had its 41st anniversary—it opened April 21, 1977, and I thought I’d celebrate it by showing some amazing Andrea McArdle footage. First, a word about the creation of the show. Charles Strouse talked to me about the early part of Act 1 when Annie escapes from the orphanage and winds up on the streets of the NYC. Annie is eventually brought back to the orphanage and they needed a song to cover the scene change, so he and Martin Charnin whipped something up. They put “Tomorrow” in and Charles told me the audience went crazy…but he thought it was because they were impressed by the scene change. He didn’t know it was the song was bringing down the house. He soon learned that it would become a classic and Andrea’s signature song. She was 13 when she played the role and her voice has remained remarkable! Here she is as a teenager sounding fantastic on the song that became permanently associated with her.

Andrea has so many amazing stories from her years in the show…like the fact that because Annie was supposed to be locked in an orphanage, she wasn’t allowed to be tan. However, Andrea was a tricky kid and noted that her contract only said she had to stay out of the sun…it didn’t specifically say she couldn’t be tan. So, she applied self-tanner to herself since it was technically allowed. She told me it was the old-school self tanner from the ‘70s and it would up turning her skin orange. She remembers that when she wore the red wig at the end of the show, she looked like an Oompa-Loompa. Regardless, she always sounds amazing and we’ll be doing a concert together on Sunday May 2nd! Get tix at TheSethConcertSeries.com.

Last Saturday, we had the 20th anniversary reunion of The Producers on Stars in the House. Matthew Broderick, Nathan Lane, Susan Stroman, Brad Oscar, and Cady Huffman all appeared—and then we had a surprise visit from Mel Brooks! So many fun stories. Matthew talked about how he kept hearing from various sources that he was going to play Leo Bloom, but no one actually approached him. One day he had a meeting in a hotel about an independent film with a producer and Mel Brooks. After the meeting, Mel asked him if he would stay to talk. They sat near the elevator in the lobby of the hotel and that’s when Mel asked him if would play Leo. He told Matthew he would meet him the next day to show him some songs and told Matthew to call him. When Mel went to write down his number, he didn’t have a pen so he went to the front desk to borrow one. Matthew remembered that when Mel came back, he kept telling Matthew how much he loved the pen, finally asking Matthew whether he thought he could keep the pen. Matthew told him it was probably fine and he should just ask the front desk person. Mel went over and then came back with a skip in his step, pocketing the pen. Matthew did a great imitation of Mel proclaiming “They’d be happy for me to keep it! Happy for me to keep it!”

Mel himself talked about falling in love with Broadway when he saw the original run of Anything Goes with Ethel Merman. He told us he sat in the back of the balcony and, despite how far from the stage he was, he told his Dad that Merman’s voice was too loud (I guess all the stories are true).

Mel and Susan Stroman talked about putting together “Springtime For Hitler.” Robin Wagner, the set designer, told Stroman she didn’t have enough ensemble members to replicate the famed Busby Berkeley moment in the film. Mel then told her about Siegfried and Roy who had fake people that attached to either side of a person to make it look like there are three people moving. Susan and Robin looked it up and found out it was created by William Ivey Long—the costume designer for The Producers. So fortuitous! Look how it came out here.

Mel remembered Nathan saw “Springtime For Hitler” and then requested his character Max Bialystock have an 11 o’clock number. Mel spoke to Tom Meehan about writing a number called “Betrayed” because everyone had deserted Max, but the number needed a spin. Mel remembered his days as a comic in the Catskills and how when an audience member would come in late, he would tell them that they missed most of the show. He would quickly show them everything they missed in a lightning-fast replay of the show and that’s what they did for “Betrayed.” Watch the speedy recap within the number here.

James and I also talked about 9/11, which happened a few months after the show had won the Tony Award. Cady told us that people would greet her at the stage door and tell her how much they had needed to laugh. It was the first time she felt that what she did had a bigger meaning in the world. The cast also filmed a commercial to try to get tourists back to NYC and I asked what they remembered about it. Nathan said he remember Elaine Stritch trying to force herself in the front row next to him. It worked!

Most recently, I was with the incredible Mandy Gonzalez for my concert series. Mandy was doing Hamilton when Broadway shut down but has kept very busy; she just came out with her first book about a young girl who winds up on Broadway. That’s my kind of book! It’s called Fearless and it’s the beginning of a series.

Mandy’s nickname is “The Beast” and she told me the origin story: during In The Heights, there was a vocal rehearsal with the cast and someone noticed Mandy wasn’t there. Note: Mandy’s voice is incredibly powerful, but relevant to the story, she wasn’t in certain group numbers like “96,000” so she probably wasn’t called to rehearsal. Regardless, someone in rehearsal looked around and asked “Where’s Mandy?” Karen Olivo immediately responded with, “The Beast don’t need no vocal rehearsal!” And the name stuck. If you need proof of her beastery, watch this video we did where she spontaneously sang “Rainbow High.” So much power and such amazing breath control. Mandy remembered it was when she was starring in Wicked and was super-warmed up at all times. Enjoy and peace out!

Over 50,000 More Students Return To NYC Public School Buildings To Close Out The Year

This year, Democratic primary voters will not only select their mayoral candidates from the largest …