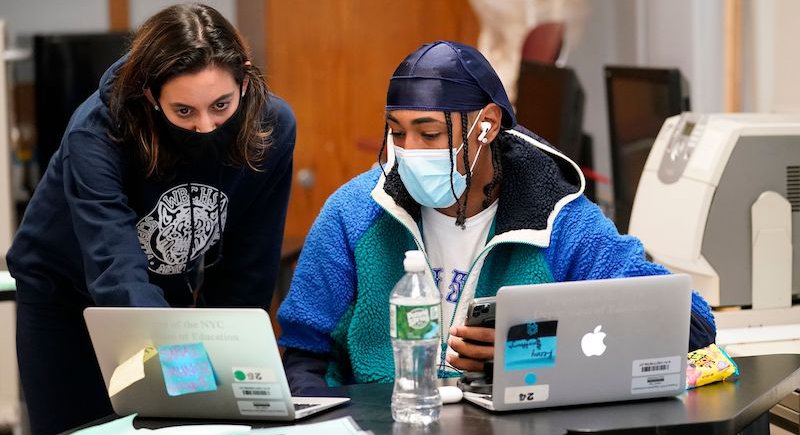 About 51,000 more students began returning to the city’s public school buildings on Monday morning, after the de Blasio Administration offered families one last chance to sign up for in-person learning this school year.

Many more schools are also offering in-person instruction five days a week starting today, or will in the coming weeks.

The mayor gave families another opportunity to return to school buildings after the Centers for Disease Control and Prevention presented new guidelines that made it possible for younger students to sit three feet apart in classrooms, rather than six.

As they filed into buildings for the first time, kids who were enrolled in new schools last fall said they’re excited to finally see their classrooms and meet their peers. Some seniors said they want at least a couple of months back in their buildings before graduation. Others said they feel safer now that loved ones are vaccinated.

Emma Welch, a sixth grader at MS 839 in Brooklyn, said her entire middle school experience had been online until this morning. “It’s really hard to connect with students through Zoom, and I think connection is a really important part of school that I’ve been missing for a long time now. So I’m really excited to go back for that reason,” she said.

She added that she had only been to her new school twice, for the tour and to pick up a book outside. “I don’t know where classes are, or where the nurse’s office is. So I’m a bit nervous for that part, but I’m sure people will show me around,” she said.

Her mother, Rebeccah Welch, said the family wanted to wait until all of Emma’s grandparents were vaccinated. “I just didn’t feel that I wanted to have them risk that kind of exposure,” she said.

Fitting more students into buildings created another logistical hurdle for administrators who have had to adjust class assignments and staffing repeatedly over the past year—and with just two months left before summer break. In many cases, students will be switching cohorts or teachers, causing some parents to complain that the opt-in period created more disruption in an already extremely chaotic year.

Joanna Cohen is an assistant principal at Sunset Park elementary school in Brooklyn where most families don’t speak English at home. She said the school staff has been working feverishly to make sure all families were aware of the option to come back in, juggle class assignments to allow scores of students to switch from remote to in person-learning, rearrange desks and lunch assignments, and ensure that all students had signed their coronavirus testing consent forms—a requirement in all public schools.

“That’s been the theme of the year, to constantly reinvent how we do things. So we’ve gotten pretty good at it,” she said. “It’s been extremely challenging and I think a lot of administrators are really on the edge of burnout.”

But even with the new influx of students into buildings, less than 40% of public school students have signed up for in-person learning this year. Out of 960,000 total students, more than 580,000 are still staying home.

Many parents have said they won’t be comfortable sending their children back until kids are vaccinated, underscoring the challenges city officials face in bringing back the whole system fully in the fall. Mayor Bill de Blasio said last week that he aims to have “every one of our children” return to school five days a week in September.

Parents also said that many older students are choosing to stay home because their schools are still mainly offering online learning within classrooms. Administrators in upper grades have said staffing the hybrid model has been especially difficult because of the range of specialized courses and electives they offer. Many parents said they’re frustrated that teachers with medical accommodations are still home months after the city started offering them vaccinations.

Parent Patricia Stern, whose son is in 10th grade at Baruch High School in Manhattan, said she loves the school and “it’s doing the best it can” even as students in classrooms continue to learn exclusively online. But because her son now has a social outlet through baseball, Stern said he declined to opt-in for in-person virtual learning. “There was no live instruction. Because he’s going to be stuck on a computer it just doesn’t seem worth it,” she said.

Some parents recently filed a lawsuit demanding a full resumption of in-person education in public schools, arguing that ‘zoom in a room’ is an inadequate measure that violates their rights to a sound, basic education.

Which Famous Song From Annie Was a Last Minute Addition?

Scott Stringer, the city comptroller vying to become the next mayor, has unveiled his first $1 milli…