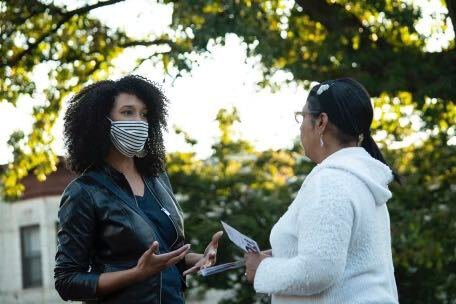 A group dedicated to electing more women in New York City, called AmplifyHer, on Monday announced it launched a political action committee to close the money gap between male and female candidates and endorsed Maya Wiley for mayor.

The group is aiming to counterbalance political spending that so far overwhelmingly favors male candidates in what is arguably New York City’s most consequential election in a generation. With no women currently holding citywide office, there are over 150 female candidates running for various seats, including three out of the eight major candidates for mayor.

Marti Speranza Wong, the executive director of AmplifyHER, said she recognized PACs were controversial — they have wide leeway to pump money into races as long as they don’t directly coordinate with individual candidates and their campaigns — but, as long as they were influencing elections, it was critical to compete.

“The reality is that these IEs and PACs exist,” said Speranza Wong, noting the flood of money into national and local elections after the 2010 Supreme Court decision known as Citizens United which allowed outside groups to raise and spend unlimited amounts of money on candidates or issues.

“So our launching of an IE is to counter that, to make sure that the types of elected officials that we want to see in office have that support,” she said, adding that the number of women in elected office has declined in New York City in the past decade. Female representation in the City Council peaked in 2009, with 18 women out of the 51 members. Currently, there are only 11.

Speranza Wong and her husband, Roderick Wong, are personally providing several hundred thousands of dollars in seed funding for the initiative, while the group plans to do additional fundraising through its website.

Her husband is the chair of Rocket Pharmaceuticals, a leading company in gene therapy which focuses on rare diseases. He also works as an investment manager at RTW, a healthcare investment firm. Prior to her work with AmplifyHer, Speranza Wong ran a program for women entrepreneurs for the city until she left the position to run for City Council in 2017.

While she lost that race, it was the experience of running that inspired her to connect with the women who helped found AmplifyHer in 2018.

IE groups began influencing New York City races in 2013, notably spending more than a million dollars against former City Council Speaker Christine Quinn when she ran for mayor. Altogether, they spent nearly $16 million dollars across the primary and general elections that year, according to data from the New York City Campaign Finance Board. Of that spending, 60% occurred just in the month and a half before the primary, totalling nearly $10 million dollars.

Eight years later, the city is on pace to wildly exceed those amounts and, so far, the bulk of the money is being spent in support of male candidates. Super PACS sunk more than $600,000 into four City Council special elections earlier this year, spending at a rate of $5-to-$1 for a male candidates over women. Of that spending, nearly $100,000 was spent against one woman candidate, Moumita Ahmed, in the 24th City Council district.

There is less information from the CFB about IE spending in the primary, for now. These groups are required to file disclosure reports with the city but most did not begin spending money until after the March 15th filing deadline. The next report is due May 21st. But if past elections are any guide, much of the spending will be done in the final weeks of the race. The primary is June 22nd, with early voting beginning June 12th.

Some information is available from the State Board of Elections because the groups must register with them and are supposed to report weekly when they raise more than $1,000 and when they spend more than $5,000. State records show that super PACs have spent to date more than $6.7 million in the New York City primary elections.

Groups supporting mayoral candidates Ray McGuire and Shaun Donovan make up the majority of those expenditures, sinking money into multi-million dollar television ad buys. But new groups that plan to raise and spend more money keep popping up each day.

All the candidate-specific IE’s are dedicated to male candidates. Future Forward NYC is reportedly planning to back Andrew Yang, with other pro-Yang groups expected to emerge. Climate Movement for Stringer, a group expected to support Scott Stringer, the current city comptroller, registered with the State Board of Elections earlier this month.

Mayoral candidate Maya Wiley recently sent out a fundraising plea to supporters, asking them for help to compete with these outside groups.

“While nearly $1 million in matching funds just hit our account, it’s pennies compared to the money that super PACs will inject into this race,” an email from the campaign reads, noting that the groups can raise and spend unlimited amounts of money which is expected to produce a crush of ads across media platforms supporting and attacking other candidates. “We need to build a budget that can go toe-to-toe with this outside spending, and we need to do it quickly.”

Last week, Wiley, a civil-rights attorney, picked up the endorsement of Emily’s List, a 36-year-old national organization that backs candidates who support women’s abortion rights. The endorsement unlocked access to the organization’s staff of experts in strategy, fundraising, and communication. The organization also has an independent expenditure group which operates apart from the work they do to support candidates.

The AmplifyHer endorsement and IE spending on behalf of Wiley is expected to help pay for a field director and borough coordinators who will lead teams of volunteers as they try to engage with voters, a different type of spending than many of the other IEs which focus more often on media buys.

Altogether AmplifyHer is endorsing seven women, including Wiley, and Council candidates Amoy Barnes in Staten Island’s 49th, Crystal Hudson in Brooklyn’s 35th, Sandy Nurse in Brooklyn’s 37th, Pierina Sanchez in the Bronx’s 14th, Felicia Singh in 32nd district in Queens and Marjorie Velazquez in the 13th in the Bronx. In each of those districts, they also plan to focus their efforts on drumming up support for those candidates.

Before she knew about the support from AmplifyHer, Nurse told WNYC/Gothamist that she’s spending almost all her waking hours knocking on doors and talking to prospective voters in the East New York district she hopes to represent.

“I often feel like there are definitely not enough hours in the day, and I struggle between wanting to do the most and trying to give myself some grace,” Nurse said last week.

Experts caution against giving too much focus to IE spending, particularly when contrasted with the city’s public-matching program, which already has awarded candidates more than $75 million in matching funds.

“The city has a strong, long-tested system for enabling candidates and supporters who don’t have access to super PAC type funds to be able to get their voices out there, to get into the mix if they have a viable message,” said Chisun Lee, deputy director of election reform at the Brennan Center for Justice.

THE CITY reported that women Council candidates have done a better job fundraising through the city’s campaign finance program, which matches donations from within a candidate’s district by $8-to-$1 once they’ve reached a minimum number of donors. But Lee also acknowledged that the nature of the law post-Citizens United may force groups like AmplifyHer to feel like IE spending is the only way to compete.

“Within that framework, if there are organizations that want to invest more in face-to-face interaction with voters and increasing civic engagement and participation compared to big-issue ads,” said Lee, “that sounds like it’s better for democracy.”

Which Famous Song From Annie Was a Last Minute Addition?

It’s MAGA versus the mainstream in Tuesday’s GOP gubernatorial primary, as two candidates who adhere…