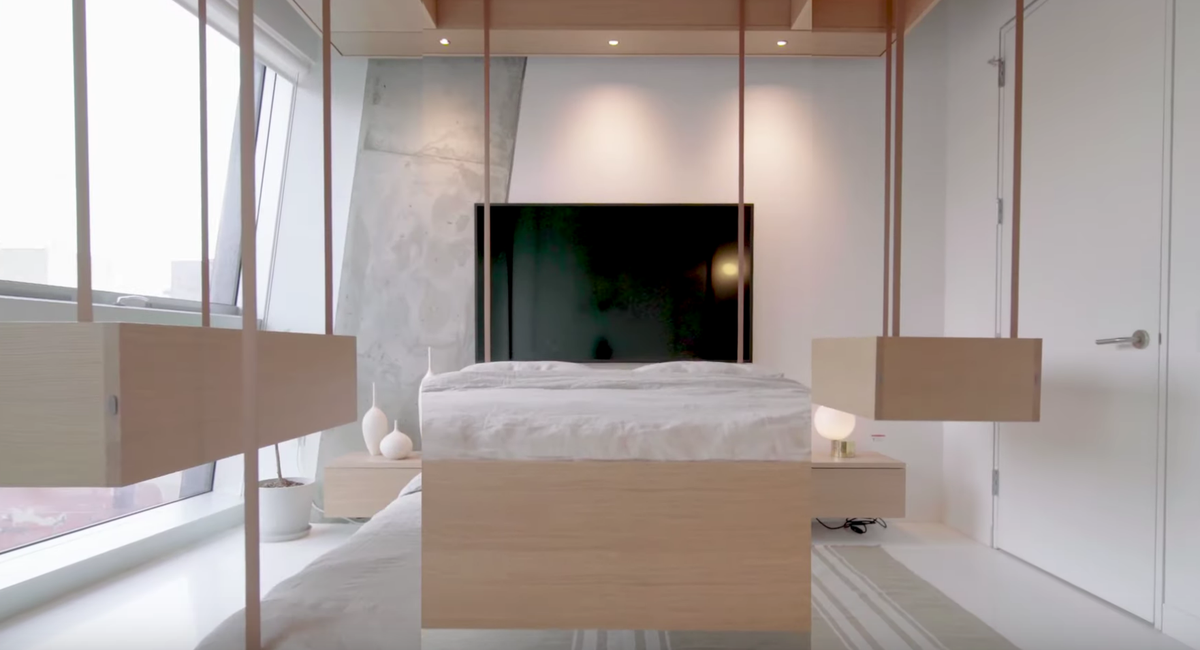 Is the future of tiny apartment living in New York City one in which your bed and most of your earthly possessions are gently lowered down from the ceiling at the touch of a button, like a gift from the Crate & Barrel deity?

The Smile, a starchitect-designed new development in East Harlem, has the very first studio apartment in the city to use a fancy kind of Murphy-Room, in which your bed and dressers are lowered from a ceiling compartment, and raised while you’re not using them, in a variety of configurations.

Don’t remember where you put your copy of The Death And Life Of Great America Cities? Cameras inside the storage compartments allow you to see what’s inside them on your phone, and even search for your things by name.

“We unlock what architects currently call the sixth wall in the room,” said Sankarshan Murthy, the founder and CEO of Bumblebee Spaces, the company that makes the devices. “Murphy Beds, attics, these things have always existed, they’re not used in mainstream architecture. They’re used as a fringe, hideaway furniture thing. It’s not desirable because if you put a Murphy bed in the room it feels like you’re just kind of squeezing something out of a room that cannot support a bed,” he said.

Murthy, who jokingly referred to his creation as a “Murthy Bed,” said the idea for the concept came out of “a kind of debate with my wife” after they moved into a small San Fransisco-area apartment. “We don’t need two or three rooms, we need to make the most out of these rooms,” he recalled.

The system extends out of the ceiling by 14 inches; the compartments can hold up to 90 pounds of stuff, while the bed platform’s weight limit is around 130 lbs. Sensors are supposed to prevent people from getting pulled up into the ceiling or crushed from below (Murphy Beds have occasionally killed people and annoyed Charlie Chaplin, but they also employ a heavy counterweight).

“It’s very sophisticated but in practice, you can think of it as a very high density garage door sensor that is sweeping across the whole room that is checking for safety on the way down. On the way up we’re checking for overload,” Murthy said.

“The invention is not that we built a motor. The invention is also not that we can make a box go up and down. The invention is that we’re able to bring this amazing user experience between hardware/software interaction into the home in a reliable, safe manner that makes living efficiently more fun,” Murthy added. (The data cataloguing your stuff belongs to the user and Murthy said it will not be shared with any third parties.)

This 470 square-foot unit, which rents for $3,550/month, is the first of five with the hardware that are online (the 70 other “affordable units” in the building appear to have been snatched up); there are a total of 11 in The Smile, and Murthy said his company has already built units like these in the Bay Area and is currently working on “a lot more projects in New York.”

If that sounds like an obscene amount of money to spend on a sleek shoebox, you could always look to Carmel Place in Kips Bay. Those 300-square foot units are a product of a Bloomberg-era design competition, and one is currently renting for $2,260/month, well under the shockingly low Manhattan median rent of, ahem, $2,700/month, according to new data released on Friday. There’s no A.I. or voice commands, but you won’t ever have to text your super “bed won’t go back into ceiling lol.”

Listen to Celia Keenan-Bolger and Zachary Quinto in Sunday Pancakes

The June primary is just around the corner, and when New Yorkers get to their polling place this yea…